There's no telling where thoughts about a seemingly simple, even trivial, question may lead.
Consider the problem of turning a circle into a square. Cut a circle out of a sheet of paper. Then cut the circle into pieces so that the pieces, when fitted back together, form a square having the same area as the original circle.
The task seems impossible: How do you get rid of the curves?
But there is a mathematical solution. In 1989, Hungarian mathematician Miklós Laczkovich accomplished the mind-bending feat of proving that it is theoretically possible to cut a circle into a finite number of pieces that can be rearranged into a square.
The problem solved by Laczkovich is distantly related to an ancient riddle known to Archimedes, Euclid, and other Greek scholars. At issue is whether it's possible, with just a ruler and compass, to draw a square with an area equal to that of a given circle.
This particular problem remained unsolved for centuries despite the efforts of numerous mathematicians, both amateur and professional. General interest in the problem was so great and the number of proposed but erroneous proofs so voluminous that, in 1775, the Paris Academy found it necessary to pass a resolution stating that no more purported solutions to the circle-squaring problem would be examined.
In the end, the solution hinged on the properties of the number pi. A circle and a square have equal areas only if the ratio of a square's side to a circle's radius equals the square root of pi. 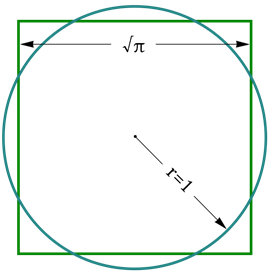 In 1882, Ferdinand von Lindemann (1852–1939) proved that pi is what is known as a transcendental number, effectively ruling out the possibility of constructing a square out of a circle using only ruler and compass. There's no way to divide up a line in the required ratio because all ruler-and-compass constructions are the geometric equivalent of algebraic equations, and pi, as a transcendental number, can't be the solution to such equations.
Laczkovich tackled a version of the problem originally devised in 1925 by mathematician and philosopher Alfred Tarski (1902–1983). Tarski removed the ruler-and-compass restriction and asked whether there is any way to cut up a circle into pieces that can be rearranged into a square of the same area.
In the previous year, Tarski and Stefan Banach (1892–1945) had proved a remarkable analog of the same conjecture in three dimensions, showing paradoxically that a sphere can be cut up into a finite number of pieces and rearranged not only into a cube of the same volume but also into a cube of twice the volume. In fact, a sphere sliced up in just the right way could be rearranged into virtually any shape of any size.
At first glance, the Banach-Tarski result sounds like a contradiction. The explanation of the paradox lies in the nature of the pieces that get rearranged. The pieces aren't solid chunks with nice boundaries. Instead, they are so convoluted, diffuse, and intertwined that it's mathematically impossible to measure the volume of an individual piece. It's only when the pieces are put together that the resulting solid has a measurable volume.
And, strangely, there's no contradiction in concluding that this can be done in different ways, resulting in different volumes.
The two-dimensional version of the problem turned out to be more difficult to handle than the three-dimensional version. Mathematicians who studied Tarski's circle problem strongly suspected there is no way to cut up a circle to make a square without losing even a single point out of the circle. Banach himself proved that any rearrangement of a figure in the plane must have the same area as the original.
In 1963, Lester Dubins, Morris Hirsch, and Jack Karush proved the problem couldn't be solved by cutting a circle into "ordinary" pieces with well-behaved, relatively smooth boundaries—the kind you make using a pair of scissors—no matter how many such pieces are used.
Laczkovich proved that "squaring the circle" is possible, provided that the pieces have the right form. His pieces encompass an array of strange, practically unimaginable shapes. Although some resemble those in an ordinary jigsaw puzzle, others are curved segments, strangely twisted bits, or collections of single, isolated points.
Remarkably, assembling a square from these pieces of a circle is possible simply by sliding the pieces together. No piece has to be rotated to fit into place. The resulting square has no gaps and no overlapping pieces.
Laczkovich initially estimated that about 1050 pieces are needed, many more pieces than there are water molecules in all the world's oceans combined.
Laczkovich's proof applies not only to circles but also to nearly any plane figure with a mathematically well-behaved boundary. Any such figure can be cut into pieces and rearranged into a square of the same area with no gaps or overlays.
For example, it's possible to take apart a triangle or an ellipse and fit the pieces back together as a square without even rotating any of the pieces.
The solution of the squaring-the-circle problem shows that such apparently simple notions as length, volume, point, curvature, and area must be treated with due respect and awe.
In particular, Laczkovich's result bears on the fundamental questions of what mathematicians really mean by the notion of curvature and how to decide when two objects have the same area.
The proof shows that present ideas about area seem to be correct. Cutting one shape into pieces, then rearranging the pieces into another shape, is a reasonable way to show that shapes have equal areas.
But curves and straight lines are so different that they can be converted into each other only with the use of strange manipulations.
Some years ago, Pam Pierce, John Ramsay, and several students at the College of Wooster put together a remarkable visualization of Laczkovich's circle-squaring result, illustrating how to approximate the process using pieces that are easy to visualize. See "The Circle-Squaring Problem Decomposed."