The craft of counted cross-stitch lends itself to the creation of elegant patterns on fabric, and mathematician Mary D. Shepherd has taken advantage of this form of needlework to vividly illustrate a wide variety of symmetry patterns. 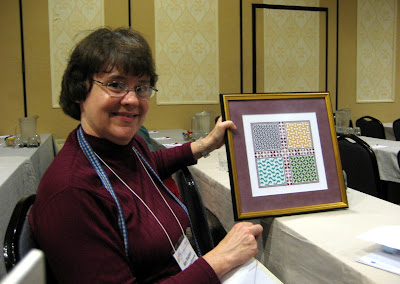 Mary Shepherd with her cross-stitch symmetries sampler.
Photo by I. Peterson

The fabric that Shepherd uses is a grid of squares, and the basic stitch appears as an X on the fabric. In other words, one cross-stitch covers one square of the fabric.

Stitching over squares constrains the number of symmetry patterns that you can illustrate using this technique. The reason for this constraint is that the only possible subdivision of a square is with a stitch that "covers" half a square on the diagonal. In effect, a half cross-stitch splits a square into two isosceles triangles, covering only one of the triangles.

This means that the only angles you can create in a counted cross-stitch pattern are multiples of 45 degrees. 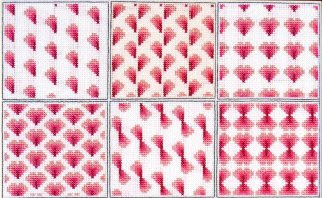 Shepherd has also worked on both frieze and rosette symmetry patterns. Frieze patterns, often used for borders, have translations in two directions. A rosette pattern has at least one point that is not moved by any of the symmetry transformations (translation, rotation, reflection, and glide reflection), Shepherd notes. Hence, the only transformations that can occur in rosette patterns are reflections and rotations.

Rosette patterns, for example, give a nice visualization of the symmetries of a square (technically, the group D4 and all its subgroups), she says. 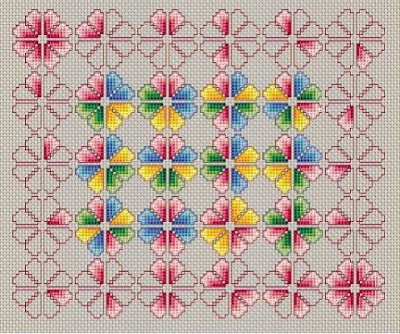 Rosette patterns for visualizing the symmetries of a square (the dihedral group of the square).
Courtesy of Mary D. Shepherd

Shepherd provides instructions for crafting a "symmetries sampler" in the book Making Mathematics with Needlework: Ten Papers and Ten Projects (A K Peters).

She has also used counted cross-stitch examples in the classroom to illustrate and explore ideas about symmetry groups and subgroups.

References to Möbius strips can pop up unexpectedly in all sorts of settings, including novels. I'm especially intrigued by examples in which the term is used without further explanation. The reader is expected to understand the reference and know all about the peculiar one-sided, one-edged character of this mathematical object.

One example that I recently encountered is in an amusing, quirky mystery, Forbidden Fruit by Kerry Greenwood. Near the beginning of the book, the author offers the following passage:

"I donned a loose caftan made to a Therese Webb pattern. I had made it seven times, and each time I had a moment when I feared that the fabric would have to be folded into another dimension to fit the design. This möbius robe was made of a fine blue butterfly batik."

I'm not sure I can picture exactly what this garment looks like, but it sounds suitably exotic. 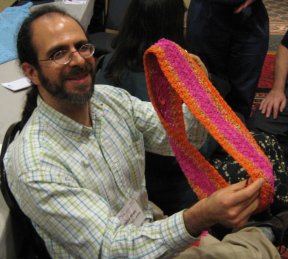 A crocheted Möbius band, by Josh Holden.
Photo by I. Peterson

Another mystery with a Möbius reference is What's the Worst That Could Happen by Donald Westlake.

"When Brandon . . . stood at the picture window, with its view out over the Battle-Lake, at the moment peaceful, with the tall Moebius shape of the hotel beyond it."

In this case, I definitely can't picture the twisty hotel, but the setting is Las Vegas, so it's probably not beyond the realm of possibility. Yet it sounds pretty weird.

A design for a building with a Möbius-strip ramp.
Courtesy of R.J. Krawczyk and J. Thulaseedas

In some novels, the Möbius metaphor or simile is straightforward and apt. Consider the following passage from Goodbye Without Leaving by Laurie Colwin.

"Laundry," I said, yawning. "I never really understood about laundry before. It's a kind of Moebius strip—no end and no beginning."

For some examples in articles and other settings see "Words with a Twist" and "Möbius Pop."