From Hexagon to Square

The hexagonal terra cotta tiles that cover the floors of Metrorail stations are among the more distinctive features of the subway system serving Washington, D.C., and its neighbors. 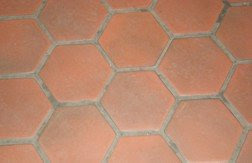 Several years ago, the board in charge of Metro debated whether to replace the original hexagonal tiles with square ones. The terra cotta tiles had proved treacherous when wet, and manufacturers of safer tiles apparently made squares but not hexagons. And slicing off corners to turn squares into hexagons would be costly and wasteful.

In the end, Metro decided to test precast concrete paver tiles as a replacement for the original terra cotta tiles. Now, the verdict is in. The pavers proved more durable and did not become as slick when wet. Metro will use the new tiles in the construction of all future Metrorail stations and install them at other stations as part of its ongoing platform maintenance program.

The pavers are said to be square, but to help preserve the original look, they are imprinted with a hexagonal pattern and have a vaguely terra cotta color.

The new tiling unit is shown above. Its inscribed pattern consists of eight complete hexagons and parts of several others, for the equivalent of 14 hexagons. But there are other ways to divide a hexagonal tiling into "square" units. Is the chosen tile pattern the best one to create the desired repeating arrangement? 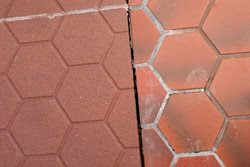 A side-by-side comparison of the original (right) and new tiles. WMATA

Metro describes the new pavers as being 2 feet by 2 feet. But can the pavers really be square, or is Metro (or the paver manufacturer) cheating a tiny bit to make it possible to create a hexagonal tiling out of "squares"? If the hexagons are truly to be regular, I get a slight difference between the height and width of a paver.
Posted by Math Tourist at Thursday, June 18, 2009 1 comment: Links to this post