From one viewpoint, the sculpture looks like an ellipse with a thick rim. In reality, it is a tilted, circular ring, 19 feet across. More than that, it ingeniously tracks the sun, casting distinctive shadows at different times of the year. 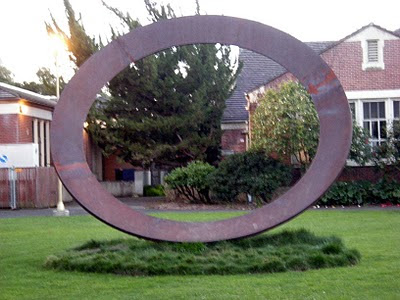 Titled Annual Ring, the  weathered steel (COR-TEN) artwork was created by Northern California sculptor Roger Berry in 1987 and installed on the campus of Santa Rosa Junior College, California, in 2009.
Berry describes the form as a conical torus, about 25 inches wide and pitched at an angle of roughly 51.5 degrees, which is in the plane of the ecliptic, the apparent path the sun traces across the sky during the year. 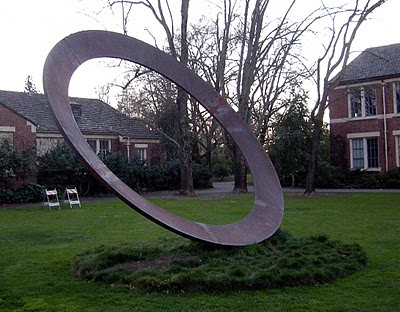 At the time of the equinox, for a period of two or three days, the giant ring's shadow is simply a straight line on the ground all day long. Because of the sculpture's orientation, during summer, the north side basks in sunlight and the south side lies in deep shadow. The reverse happens in winter.
"If you pay attention to the piece," Berry says, "you can watch the passage of time." 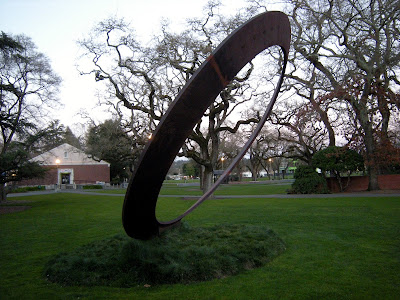 Looming over a green area on campus, the sculpture is bound to appeal not only to art, astronomy, and mathematics aficionados but also to Frisbee enthusiasts. It's this variety of experience, unlike that with an object in a museum or art gallery, that makes public art on a large scale appealing to Berry.
"Any sculpture . . . that is out there ought to change and reflect and have a kind of life," he says. "It's not like a painting on a wall or a sculpture in a niche. It ought to in some way embody its setting."
Listen to Berry talk about Annual Ring on a Foss Creek Pathway Podcast from the Voigt Family Sculpture Foundation.
Photos by I. Peterson
Posted by Math Tourist at Monday, February 28, 2011 1 comment:

The plaza in front of the Lawrence Hall of Science in Berkeley, Calif., features not only a model of a fin whale, which attracts clamberers of all ages, but also something more mundane—a fountain that simply  spouts water into the air. Nonetheless, on a windy day, the fountain can produce an intriguing splash pattern (below) that is well worth pondering. 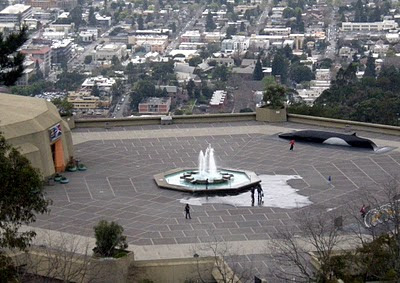 Notice that a fairly smooth curve bounds the wet area to one side of the fountain. What factors determine the size and shape of this curve?
One key determinant is the wind—both its direction and speed. In this case, because the curve is relatively narrow and symmetrical, the wind isn’t changing direction very much, and the height of the curve suggests strong gusts.
Other factors also come into play, including the geometric shape of the fountain's water jets, the evenness of the plaza's surface, the fountain's octagonal edge, and so on. What might be causing the wings on either side of the main bulge? 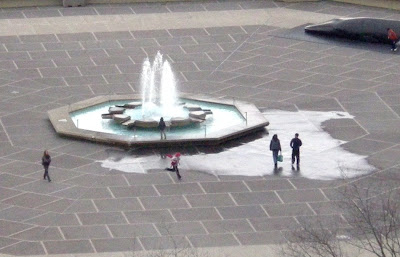 It would be interesting to observe these splash patterns as they vary from day by day. What would they tell us about prevailing winds and the other factors that combine to create these wet spots?
Photos by I. Peterson
Posted by Math Tourist at Monday, February 21, 2011 No comments:

Perched high on the steep slopes of a hill overlooking Berkeley, Calif., the Mathematical Sciences Research Institute (MSRI) has a spectacular site, with a view across the bay to the Golden Gate Bridge and beyond.
Visitors to MSRI are also greeted by a fascinating tile mural that stretches across a wall beside the entrance to the building. 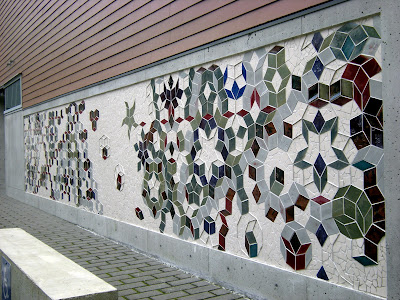 Designed by Linda Vanderkolk and Scott Frankenberger and installed in 2006, the geometric mosaic is titled Tessellation Tango. 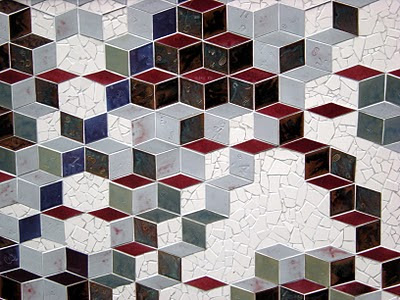 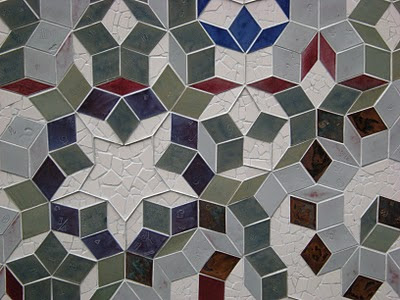 The same two types of rhombic tiles can also be arranged into a Penrose tiling.
The middle section of the mural tries to reconcile the two distinct tiling patterns, presenting a dialog between the two forceful approaches to organization. The artists imagine this interaction as a dance—as communication in search of commonalities, all set against a chaotic background of fragmented white tiles. 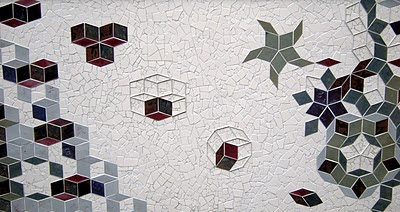 The middle section of the tile mural Tessellation Tango.
About two thirds of the porcelain tiles are inscribed with numbers, mathematical expressions, concepts, and names. 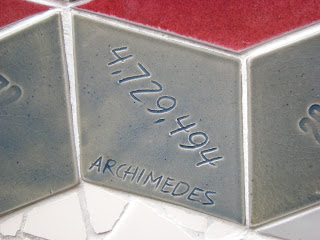 "We explore possible patterns within the tessellations, and then patterns within the pattern, augmented by color repetitions or shape development," Vanderkolk and Frankeberger note. "The frame of the mural is not the limit of the visual field. We can imagine more patterns and new forms implied unfolding in the imaginary zone beyond the edges." 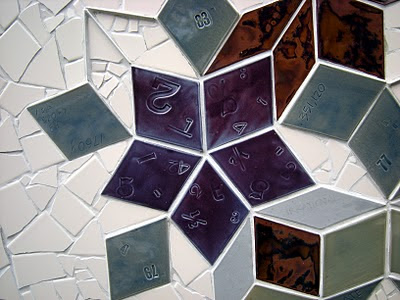 "The kind of thinking that artists often use—exploration, discovery, creativity, synthesis—is the very same at its root as that used by mathematicians," they add. "The different ways of looking at the same forms and patterns, both far away and close up, leads to enlightened new thinking, and inspiration."
Photos by I. Peterson
Posted by Math Tourist at Sunday, February 20, 2011 1 comment:

I recently found a new U.S. penny in my loose change. The "heads" side still shows Abraham Lincoln's profile, but the "tails" side now features the Union Shield instead of the Lincoln Memorial. I had to wonder whether this new coin has the same distinctive bias that older Lincoln pennies display.

Starting in 2010, U.S. pennies featured the Union Shield instead of the Lincoln Memorial on one side of the coin.
Flipping a coin in the air is a common way to make a choice between two alternatives; for example, to decide which team starts with the ball in a football game. You expect the coin to come up heads or tails with equal probability.

But this happens only when a coin spins perfectly around a horizontal axis through the coin's center. Everyday coin tosses typically fall short of such perfection. For these imperfect tosses, Persi Diaconis, Susan Holmes, and Richard Montgomery showed that a coin is slightly more likely (51 percent) to land on the same face as it started out on (see "Coin Toss Randomness").

A coin that rolls along the ground or across a table after a toss introduces other opportunities for bias. An uneven distribution of mass between the two sides of a coin and the nature of its edge can tilt the outcome to favor one side over the other.
Older U.S. pennies, showing the Lincoln Memorial, provide a striking example of such a bias. Stand a dozen or more pennies on edge on the surface of a table. Then let the pennies fall over. You might have to bang the table to get them all to topple. Count how many land with tails up and how many land with heads up. 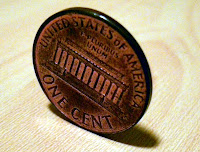 A U.S. Lincoln penny standing on edge.
You might expect about half to be heads and half to be tails. But that rarely happens. Nearly always, you end up with many more heads than tails. 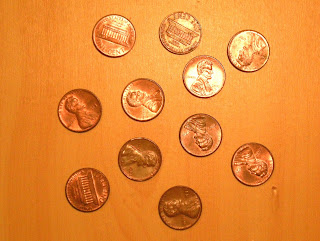 Such an outcome points to the fact that this coin has an uneven weight distribution, leading to strongly biased results.

Spinning a coin on its edge on a table is a somewhat different matter. Again, the location of the coin's center of mass makes a difference, but spun pennies, for example, tend to land tails more often than heads. Indeed, a spinning penny will land tails about 80 percent of the time.

Such unexpected results come as a surprise to most people, who rarely consider the possibility that the coins they use to play games or settle a variety of issues may be biased. To ensure a more equitable result, it's probably wise to catch a coin before it lands on some surface and rolls, spins, or bounces to a stop.

I don't know yet whether the shield penny also shows a bias. I haven't managed to collect enough of the new coins to try the same experiment with them.

Are other coins biased? The best way to find out is by doing the penny experiment with them, if you can get them to stand upright.
Posted by Math Tourist at Saturday, February 05, 2011 8 comments: