Toward the end of the first paper that he published in England, famed Indian mathematician Srinivasa Ramanujan (1887–1920) offers three series representations of the inverse of the constant pi (1/π).

Amazingly, two of these formulas appear on a blackboard in a scene in the insanely popular Disney movie High School Musical, except that one of the formulas isn't quite right. In the movie, young star Vanessa Anne Hudgens plays brainy Gabriella Montez, who asks her teacher, "Shouldn't the second equation read sixteen over pi." The expression on the board reads 8/π.

"Sixteen over pi," the teacher replies. "That's impossible." She then whips out a calculator and somehow figures out that Gabriella is right. "I stand corrected," she concedes.

The correct version of Ramanujan's series for 1/pi that appears in High School Musical.

That bit of dialog near the beginning of the movie helps establish where Gabriella stands as a student at her high school. This movie moment also now figures in a paper published in the August-September issue of the American Mathematical Monthly. Nayandeep Deka Baruah, Bruce C. Berndt, and Heng Huat Chan provide a survey of Ramanujan’s series for 1/π and start off with the formulas that play a part in High School Musical.

An acknowledgement from the authors notes, "We are pleased to thank Si Min Chan and Si Ya Chan for watching High School Musical, thereby making their father aware of Walt Disney Productions' interest in Ramanujan's formulas for 1/π."

The paper originally appeared in a special issue of the Indian journal The Mathematics Student, published in 2007 by the Indian Mathematical Society in its centennial year.

Arches are commonplace architectural features; arches in the shape of parabolas are rather rare. One of the most striking instances of the use of parabolas in architecture can be found at the Priory Chapel of Saint Louis Abbey in Creve Coeur, Missouri. 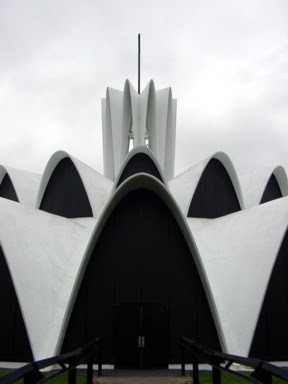 Designed by Gyo Obata, the chapel’s circular façade consists of three tiers of concrete parabolic arches. The arches stretch upward from a grassy base; the top row forms a bell tower.
Photo by Jane Barnard.
Based in St. Louis, Obata was also responsible for the striking hyperboloid design of the James S. McDonnell Planetarium at the St. Louis Science Center. In addition, he designed the National Air and Space Museum in Washington, D.C., a structure that consists of four marble-encased cubes connected by three steel-and-glass atria. 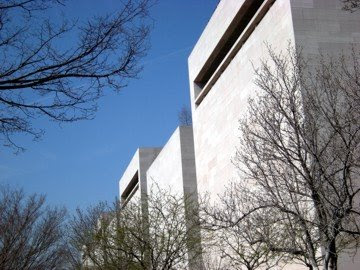 A view of the National Air and Space Museum. Photo by I. Peterson.
The famous Gateway Arch, part of the Jefferson National Expansion Memorial in St. Louis, is not a parabola. Designed by Eero Saarinen, the structure is essentially an inverted catenary, described by the hyperbolic cosine function. Obata studied under Saarinen at the Cranbrook Academy of Art in Michigan.
Posted by Math Tourist at Friday, July 10, 2009 No comments: