A mechanism for drilling square holes has to turn circular motion into square motion.

In one early attempt to create such a device, James Watts had the idea of rotating a Reuleaux triangle within a square. A Reuleaux triangle, named after mechanical engineer Franz Reuleaux (1829–1905), has the same width all the way around. Its shape is made from arcs of circles centered at the vertices of an equilateral triangle.

To make a Reuleaux triangle, draw three arcs of circles, with each arc having as its center one of an equilateral triangle's vertices and as its endpoints the other two vertices.

Like a circle, this rounded triangle fits snugly inside a square having sides equal to the curve's width no matter which way the triangle is turned. As it rotates, the curved figure traces a path that eventually covers nearly every part of the square. Watts started a company, Watts Brothers Tool Works in Wilmerding, Pa., to make square-hole drills based on this idea. The company is still in operation today.

However, the resulting drilled shape is not a perfect square. Its corners are slightly rounded. 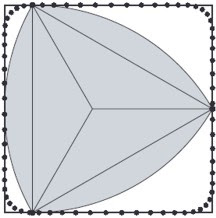 Rotated inside a square, a Reuleaux triangle traces a curve that is almost a square.

Barry Cox (University of Wollongong) and Stan Wagon (Macalester College) have recently explored geometric solutions to the problem of drilling exact square holes. They describe their investigations in the article "Mechanical Circle-Squaring," published in the September College Mathematics Journal.

Cox and Wagon begin with a mechanical device originally presented in an anonymous 1939 article in the magazine Mechanical World. John Bryant and Chris Sangwin (University of Birmingham) revisited the design in their book How Round Is Your Circle? Where Engineering and Mathematics Meet (Princeton University Press, 2008) and built a physical model of the drill.

The geometric key is to use a variant of the classic Reuleaux triangle in which one vertex is rounded off. The starting point is an isosceles right triangle. In the completed construction, the vertex at the right angle traces out a small square when the entire figure rotates within a larger square. 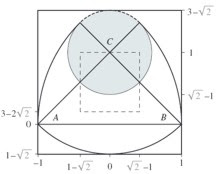 In this variant of the classic Reuleaux triangle, the vertex C traces out the inner square (dashed lines) when the rotor, a curve of constant width, rotates so that it always lies within the outer square.

"If one places a cutting tool at point C . . . and turns the rotor so that it stays inside the large square, then C traces out an exact square and the cutting tool stays inside the larger square," Cox and Wagon write. "Thus the device can be viewed as a drill that drills an exact square hole, though we need to bring the construction into the third dimension to get a working model."

Using computer algebra tools, Cox and Wagon generalized the approach to obtain a roller for drilling a perfect hexagonal hole. In this case, the required shape is made up of six circular arcs. 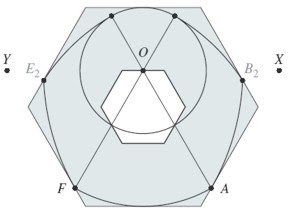 A roller for drilling a perfect hexagonal hole is made up of six circular arcs, centered at O, A, X, O, Y, and F.

"Similar ideas work for the octagon, and it seems likely that they will extend to regular n-gons when n is even," Cox and Wagon conclude. "So the main unresolved problem is whether one can construct a device along these lines that will make a 3- or 5-sided hole."

The Geometric Spectacle of Water Fountains

Whether spraying graceful arcs of water into the air or letting water tumble down steep slopes, outdoor fountains draw attention. They can startle the eye and soothe the ear. They can offer cool respite from a day's travails.

Andrew J. Simoson of King College has pondered the factors that contribute to the visual impact of water fountains. What makes some fountains more spectacular than others? To Simoson, one ideal is the mathematical answer to the question: "For a given initial speed of water from a spigot or jet, what angle of the jet maximizes the visual impact of the water spray in the fountain?"

Simoson presents his analysis in the article "Maximizing the Spectacle of Water Fountains," published in the September College Mathematics Journal. 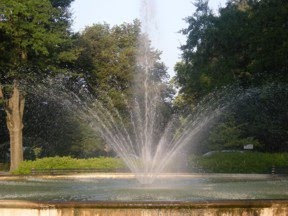 Jets of water spray out from the center of a fountain at Chevy Chase Circle in Washington, D.C. Photos by I. Peterson.

In many fountains, water sprayed from a jet or spewed from a spigot tends to follow a parabolic path. The particular arc is determined by the jet's angle and the speed at which water leaves the jet.

Simoson visualized the surfaces suggested by two arrays of water jets: one in which the jets are in a row and another in which they form a ring. For a circular array, the suggested surface is a surface of revolution of any of the parabolic streams about an appropriate vertical axis.

In his analysis, Simoson assumed that the water streams are smooth parabolic arcs. He also ignored any friction effects. In the linear case, the problem simplifies to finding the angle that gives the maximum area and the maximum arc length for a single parabolic stream. 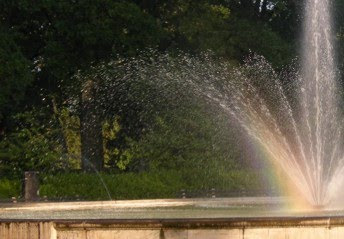 Simoson's analysis shows that, for a linear array, the most spectacular fountains with respect to enclosed volume occur when the jets are inclined at 60°. However, with respect to surface area, the critical angle to achieve the most spectacular effect can be as low as 52.8°, depending on the difference in height between the start and end of an arc. For streams in which the end point is at half the height to which the water rises, the angle is about 53.5°.

For circular arrays of jets, the critical angles are less than 60° for both maximum volume and maximum surface area and differ from the results for linear arrays, going as low as 49.05°.

"The reason must lie in the difference between a linear array of jets versus a circular array of jets," he explains. "Evidently, the advantage of having jets set at 60° in as far as accruing area under the streams and hence volume under the surface of revolution is eroded by the fact that adjacent streams get closer together as they near the fountain center, hence contributing less volume than intuition may have at first expected."

Simoson's analysis opens up the possibility of deliberately designing fountains that meet his criteria for spectacle—or checking existing fountains to see how close they come to the relevant criteria.

Portland, Ore., where MathFest 2009 took place earlier this month, has a variety of outdoor water fountains. Unfortunately, my photos of several of these fountains were not precise enough for me to check how closely they matched Simoson's criteria. 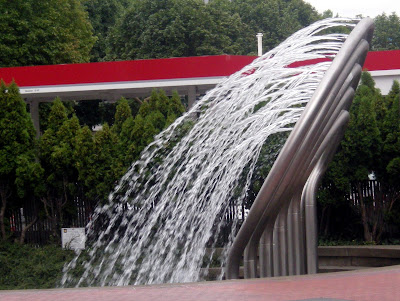 Water streams in parabolic arcs from a tubular fountain in Portland, Ore.

At the same time, fountains don't have to feature water jets in any sort of array to be spectacular or even aesthetically pleasing. 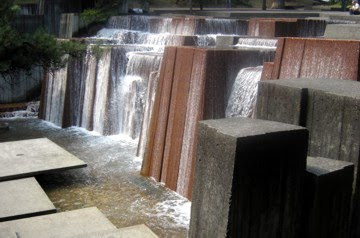 Water cascades down stone blocks in this striking Portland fountain.

And water jets can be combined with other mathematics—the Fibonacci sequence, for instance—to create intriguing effects, as seen in Helaman Ferguson's Fibonacci Fountain in Bowie, Md. 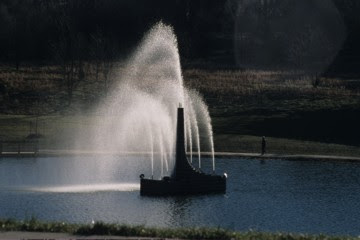