For a Welsh corgi named Elvis, merely fetching a ball isn't enough. The dog also works out the optimal path he should take to retrieve the ball in the shortest possible time—all the better to squeeze in some extra rounds. 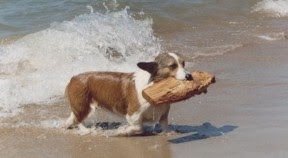 Having established that Elvis apparently solves a calculus problem each time he fetches a ball thrown from a sandy beach into the water, mathematician Tim Pennings of Hope College in Holland, Mich., has since studied his dog's problem-solving ability when Elvis has to choose between two qualitatively different options on which path to take.

While playing fetch at the beach, Elvis sometimes starts in the water. When a ball is thrown parallel to the shore, Elvis has the option of swimming directly to the ball or heading for the shore, running on the sand, then swimming back out to the ball. If the distance to the ball is short, the best strategy is to swim directly to the ball. For longer distances, the swim-run-swim option is Elvis's best bet to minimize retrieval time, assuming that Elvis runs faster than he swims.

"Such a situation induces a bifurcation in his optimal strategy," Pennings and colleague Roland Minton of Roanoke College note in the November College Mathematics Journal. In other words, at some distance, the optimal strategy must change from swim to swim-run-swim.

The mathematicians ask, "What is the bifurcation point at which the optimal strategy changes?" And does Elvis change his strategy at this optimal point? In other words, does Elvis know bifurcations?

Minimizing the total time for the swim-run-swim pathway reveals that, for the optimal path, the incoming swim leg makes the same angle with the shore as the outgoing swim leg does (like light reflecting from a mirror or a billiard ball bouncing off a rail). Pennings and Minton speculate that Elvis may somehow take advantage of this symmetry in determining the quickest path to the ball.

The mathematicians also worked out a formula for the bifurcation point at which the nature of the optimal solution switches from an all-swimming mode to the swim-run-swim strategy. Clearly, there's no bifurcation point if swimming is faster than running. For shorter distances, when running is faster than swimming, the small advantage that running provides can't compensate for the extra swimming distance to get to and from shore. As the ratio of running speed to swimming speed approaches infinity, the optimal path gets closer and closer to a trapezoid.

In the case of a ball thrown parallel to the shore, x2 = x1, and the bifurcation point is:

Because Elvis lives to fetch, it was possible to set up an experiment to test his bifurcation prowess. Pennings and two undergraduate students took Elvis to the beach and first conducted some time trials. They found that Elvis's running speed is about 6.39 meters per second and his swimming speed about 0.73 meter per second. However, when later chasing a ball, Elvis's running speed dropped to a leisurely 3.02 meters per second (it was, after all, a lazy July afternoon—and swimming is tiring). In this case, according to the mathematical model, the optimal bifurcation point is 2.56x.

The researchers conducted nine trials. Each time, Pennings stood 4 meters out in the water with Elvis and threw a ball various distances, but still 4 meters from the shore. One student measured the distance of the throw and the other recorded Elvis's choice.

Elvis was certainly smart enough to consistently take the swimming-only route for shorter distances and the swim-run-swim path for longer distances. For Elvis, the bifurcation point appeared to be somewhere between 14 and 15 meters. However, the formula predicts it should have been 10.24 meters. So Elvis missed the mark in three of the nine trials, choosing to swim rather than to take the longer but (in principle) quicker route.

In the forested mountains near Bergen, Norway, a glowing orb brightens the long nights of winter. The source of light is an illuminated artwork called "Sol," created by Norwegian artist Finn Eirik Modahl. 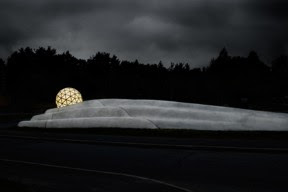 Resting in the hollow of a concrete base that resembles tiers of frozen lava, the central structure is a geodesic truncated icosahedron constructed from steel and glass. About 6 feet tall, it shines with a warming glow—and invites visitors to come near and touch the sun. 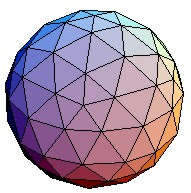 The sculpture "Sol" is based on a geodesic truncated icosahedron.

"The concept is meant to appeal to heart and mind," Modahl says. "I want contemporary art to create a dynamic, giving the people living around the sculpture a chance to take part in it." 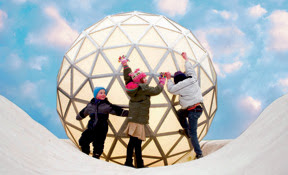 Children touch and clamber about on the geometric form at the heart of Modahl's "Sol."

"Sol" is one of several installations at the Pulse Sculpture Complex, which integrates artworks with innovative dwelling designs. 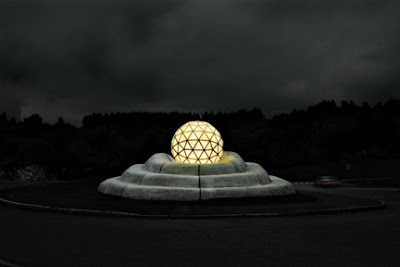 In an earlier effort, unveiled in 2000, Modahl created a dramatic obelisk, set at the heart of grassy expanse threaded by a spiral walkway—surrounded by mountains and overlooking a fjord. Called "Elektra" and located in Tyssedal, Norway, the towering monument is made of granite and glass. The stone pillars were "cracked" rather than carved into their final form. The glass inclusion—a thick vertical vein in the stone—was made from hundreds of hand-cut glass plates, which glow with an eerie green light. Modahl describes the hue as the color of a mountain lake.

Earlier in his career, Modahl had devoted his time to installation and performance art, particularly in exploring interactions between art and commerce. For two years, he was director of the Bomuldsfabriken Kunsthall, one of the leading venues for contemporary art in Norway. Lately, in developing the concepts for his monumental sculptures, Modahl has turned more and more to mathematics for inspiration and structure.
Posted by Math Tourist at Thursday, October 18, 2007 3 comments:

Coil a long rope into a box, then shake the box. It's very likely that the rope will emerge bearing a knot. 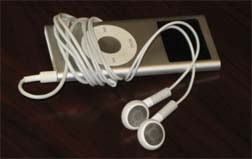 A coiled headphone cord, once unraveled, is likely to contain a knot.

Now, physicists have investigated this pervasive phenomenon, performing experiments to identify the physical factors that lead to spontaneous knot formation and applying mathematical knot theory to analyze the resulting knots. Dorian M. Raymer and Douglas E. Smith of the University of California, San Diego describe their findings in a paper to be published in the Proceedings of the National Academy of Sciences.

The researchers discovered that, when a string is tumbled inside a box, complex knots often form within seconds—if the string is long and flexible enough. For example, for a string of diameter 3.2 millimeters, coiled inside a cubic box 0.3 meter wide, which was spun at 1 revolution per second for 10 seconds, no knots formed when the string was shorter than 0.46 meter. When a tumbled string had a length between 0.46 and 1.5 meter, the probability of knot formation went up sharply. 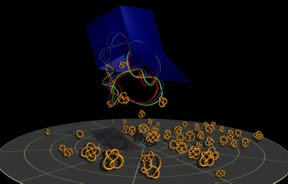 This illustration represents the knot experiment, in which a knot forms in a tumbled string. Dorian Raymer, UCSD.

Overall, the experiments suggest that the probability of knot formation increases to nearly 100 percent for long agitation times, long length, and high flexibility.

To determine what knots had formed after a string was tumbled, the physicists lifted the ends of the string directly upward from the box, then joined the ends to form a closed loop. They photographed the loop, creating a two-dimensional knot diagram showing where the loop crossed over or under itself. The researchers then applied mathematical knot theory—calculating each tangle's Jones polynomial—to identify the knot.

The analysis produced a striking result. In 3,415 trials, Raymer and Smith observed knot formation 1,127 times, identifying 120 different types of knots, having a minimum crossing number up to 11. Moreover, the researchers found instances of every prime knot with up to seven crossings. The simplest possible knot—a trefoil knot—has three crossings. Composite knots—for example, a pair of trefoil knots—formed far less frequently than did prime knots. 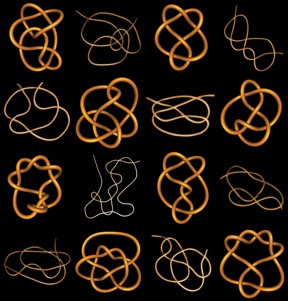 The fact that the majority of the observed knots were prime suggests that knotting tends to occur from one end. Once a knot starts at one end, it's highly unlikely (though occasionally still possible) for a knot to start at the other end. Indeed, knot theory dictates that, if a separate knot is formed at each end of a string, the knots can slide together at the center of the string but can't merge to form a single prime knot.

The researchers also developed a simple model to describe knot formation on the basis of random "braid moves" of a string's free end. With multiple parallel strands lying near a string end, knots form when the end weaves under and over adjacent segments. In effect, the string end traces a path that corresponds to the knot topology.

According to a basic theorem of knot theory, such braid moves can generate all possible prime knots. This is consistent with the observation that the physicists found all prime knots with up to seven crossings among their tumbled strings.

So, what are the chances of ending up with a knot when you unravel your carefully coiled headphone cord? They're annoyingly high, especially if the cord is long, thin, and flexible.

Raymer, D.M., and D.E. Smith. In press. Spontaneous knotting of an agitated string. Proceedings of the National Academy of Sciences.