"The 'Ocean Park' paintings of contemporary artist Richard Diebenkorn glow with a soft, hazy light. Translucent, luminous colors wash over barely visible skeletons of horizontal, vertical and diagonal lines. Each canvas stands as a window onto an abstract landscape—a serene sea or a stretch of open land."

I wrote those words in 1986 to start off an article for Science News magazine about an attempt to develop a set of rules—a shape grammar or formal description—that would allow someone to analyze the structure of a set of paintings and to generate similar images. Such a computer-mediated effort would, at the same time, provide insights into an artist’s working process.

My article focused on the pioneering work of computer scientist Russell A. Kirsch and art historian Joan L. Kirsch to create such a design grammar (or computer model) for the "Ocean Park" paintings of Richard Diebenkorn (1922-1993). His work lent itself to such an effort because Diebenkorn painstakingly layered his paintings, with thin washes of paint overlapping each other and an underlying framework of lines dividing the canvas into rectangular and triangular areas. His technique made it possible to trace the order in which he put down the elements of his composition. 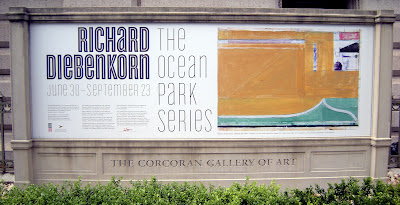 I was reminded of that long-ago reporting and writing project when an expansive exhibition devoted to Diebenkorn's "Ocean Park" artworks recently arrived at the Corcoran Gallery of Art in Washington, D.C. It was thrilling for me to see this extensive collection, ranging from large canvases to small drawings and painted cigar-box lids, in the sky-lit, wide-open galleries of the Corcoran.

I had seen individual paintings before, but viewing works that spanned Diebenkorn's Ocean Park period (he lived in the Ocean Park neighborhood of Santa Monica, California, from 1967 to 1988), vividly revealed how his vision and technique evolved over the years. 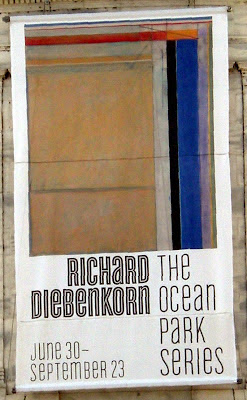 Unable to capture the colors, texture, or brushwork of a completed Diebenkorn painting, the Kirsches concentrated on the geometric framework on which the artist draped his paint. They discovered that Diebenkorn's line patterns were tightly constrained—every line depended on every other line.

The Kirsches ended up with about 42 rules that encompassed the logical sequence in which the artist put down his lines and his fondness for nesting forms within forms. They used those rules to generate frameworks for credible simulations of Diebenkorn paintings (Digital Diebenkorn: A video of a system implementing a shape grammar of the artist Diebenkorn's paintings. Refer to the paper: J. Kirsch, Russell Kirsch, and Sandy Ressler: "Computers Viewing Artists at Work," Proceedings of Syntactic and Structural Pattern Recognition, March, 1987).

I was lucky enough to interview Diebenkorn about the Kirsch project. He was gently skeptical.

In the Science News article, I quoted Diebenkorn: "In my work, I'm continually trying to do it differently. For a picture to come to life for me, it necessitates a series of surprises or maybe one big bang of a surprise. That's the crux of my work. It's surprise that keeps it alive for me."

He added, "I'm not sure that the computer allows for that."

The Diebenkorn exhibition was put together by Sarah C. Bancroft of the Orange County Museum of Art (OCMA). The show opened at the Modern Art Museum of Fort Worth in 2011, then appeared at OCMA February 26 to May 27, 2012. It is at the Corcoran until September 23, 2012, and will then travel to other art museums.

Photos by I. Peterson
Posted by Math Tourist at Sunday, August 19, 2012 No comments: 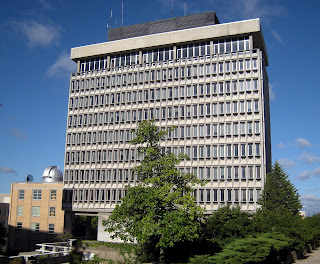 Van Vleck Hall houses the mathematics department at the University of Wisconsin-Madison. Standing atop Bascom Hill, it consists of an austere tower of offices and meeting rooms and a classroom block burrowed into the hillside.

Designed by the architecture firm John J. Flad & Associates, the complex was dedicated in 1963. It is named in honor of prominent Wisconsin mathematics professor Edward Burr Van Vleck (1863-1943), who was also active in the American Mathematical Society and served at its president (1913-1914). His main mathematical interests were function theory and differential equations. 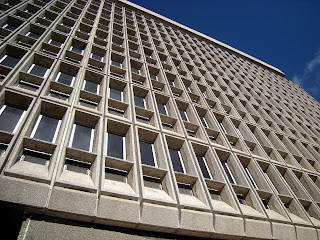 Sheathed in precast concrete panels, the stark, relentlessly symmetric tower looms over the campus.  Upon closer inspection, however, its austerity is relieved somewhat by geometric patterns that cover three of the four facades of the building’s ground floor. 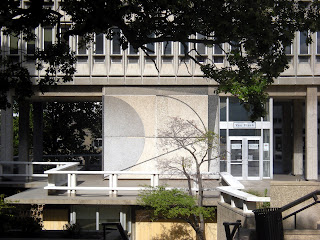 Made up of arrays of lines, circles, and triangles, these patterns hint at geometric theorems, incompletely sketched in pebbled concrete. 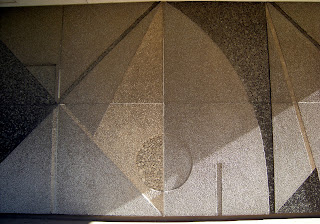 I assume that these decorative facades were part of the original design, but I can find no information on who was responsible for them, what inspired the designs, or how they were conceived and executed. 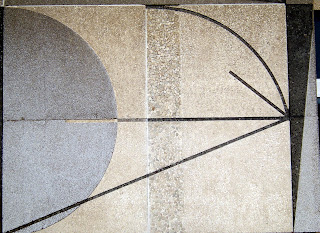 A hint of geometric theorem? 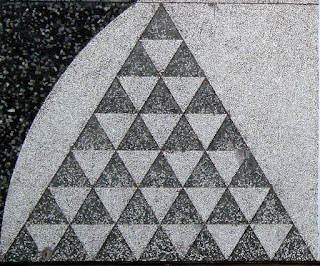 Intriguing details include this triangle of triangles. 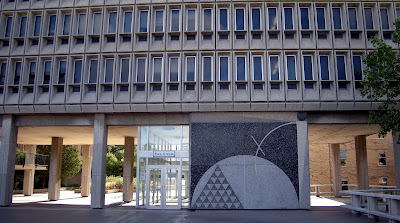 Three of the four sides of the ground floor block are covered with geometric designs. 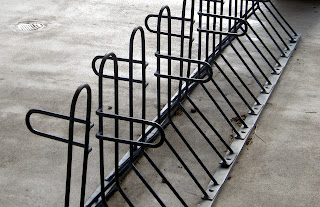 A bent-paperclip bicycle rack adds another geometric element to the setting.