For nearly three decades, sculptor Brent Collins has painstakingly fashioned wood and other materials into an astonishingly wide range of sinuous forms. A self-taught artist, he has twisted, stretched, and molded simple geometric motifs into one graceful sculpture after another.

Collins is not a mathematician. Yet his sculptural explorations, guided by intuition and aesthetic sense, have yielded patterns and forms that have an underlying mathematical logic. Many of his geometric sculptures echo with the saddle-shaped, soap-film economy of minimal surfaces.

"I've always tended in my work to distil form—pare it down to its essentials," Collins once remarked. "And those essentials are basically minimal mathematical relationships. It's a language of nature I've appropriated for aesthetic purposes."

Collins spoke recently at Knotting Mathematics and Art: Conference in Low Dimensional Topology and Mathematical Art, held at the University of South Florida.

In his latest pair of sculptures, Collins has twisted undulating ribbons into helical forms that dramatically flare into wavy petals, creating a pair of mathematical flowers. He has titled his sculptures Blosme 1 & 2, using the Middle English spelling for "blossom." 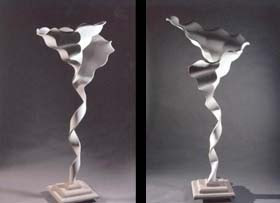 In these fanciful forms, the flower "stems" are helical bands. The edges of the "blossoms" that emerge from them follow helical pathways in space. Even the intersections of the blossom's undulating planes have a helical form.

"These compositions are sensuously organic landscapes of multiply embedded helicoid dimensions with an evocative resonance suggesting the blossoms of some flowers," Collins remarks. "The helicoid geometries as formulated in these sculptures have never been explored at a comparable level of sophistication in contemporary art and generate an unprecedented biomorphic aesthetic as sculpture." "The impression is of an exquisite biomorphic surface," Collins adds, "which seemingly could have evolved somewhere, sometime in nature."

Collins, B. 2005. Geometries of curvature and their aesthetics. In The Visual Mind II, M. Emmer, ed. MIT Press.

Francis, G.K. 1993. On knot-spanning surfaces: An illustrated essay on topological art (with an artist's statement by Brent Collins). In The Visual Mind: Art and Mathematics, M. Emmer, ed. MIT Press.