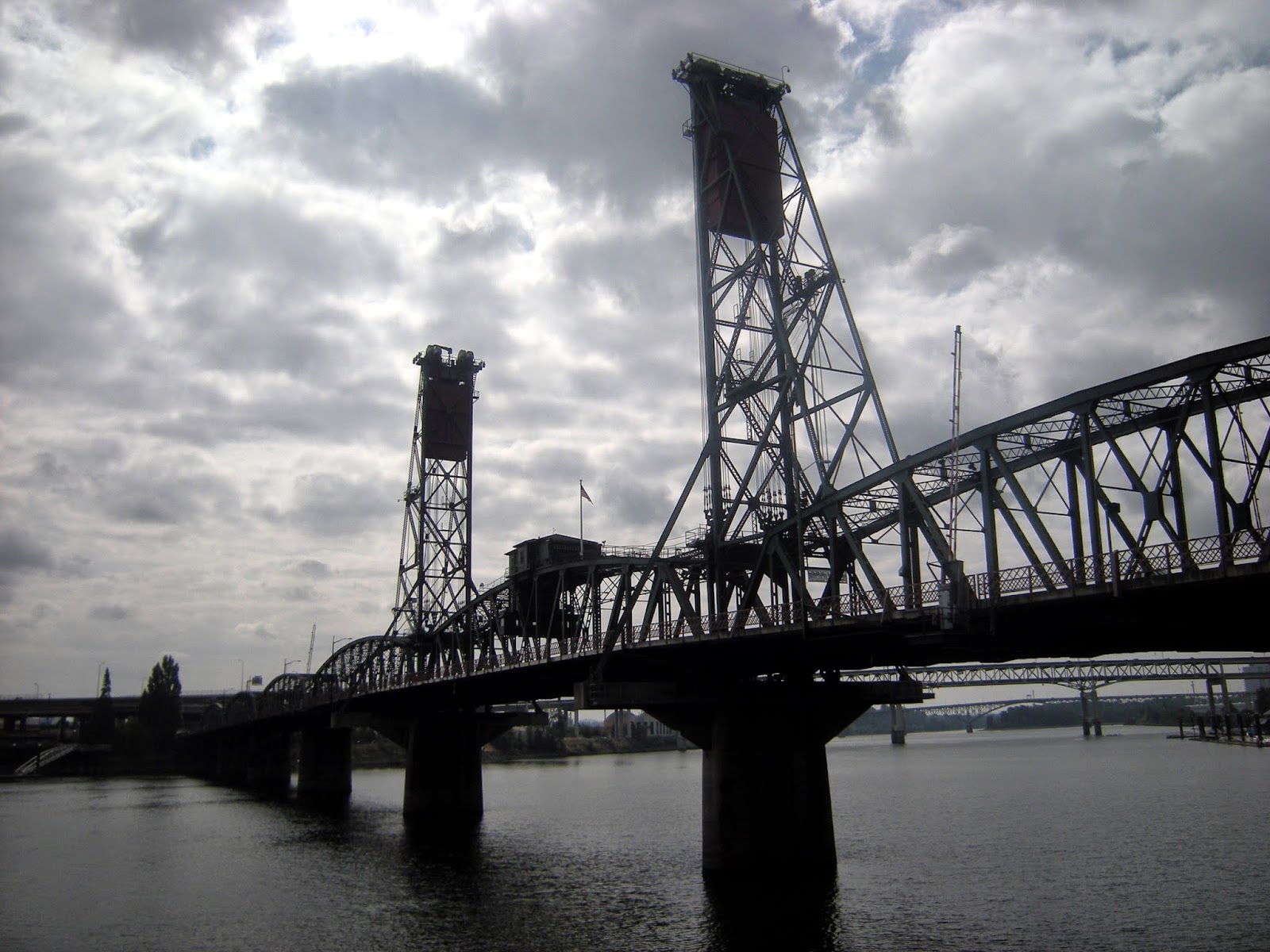 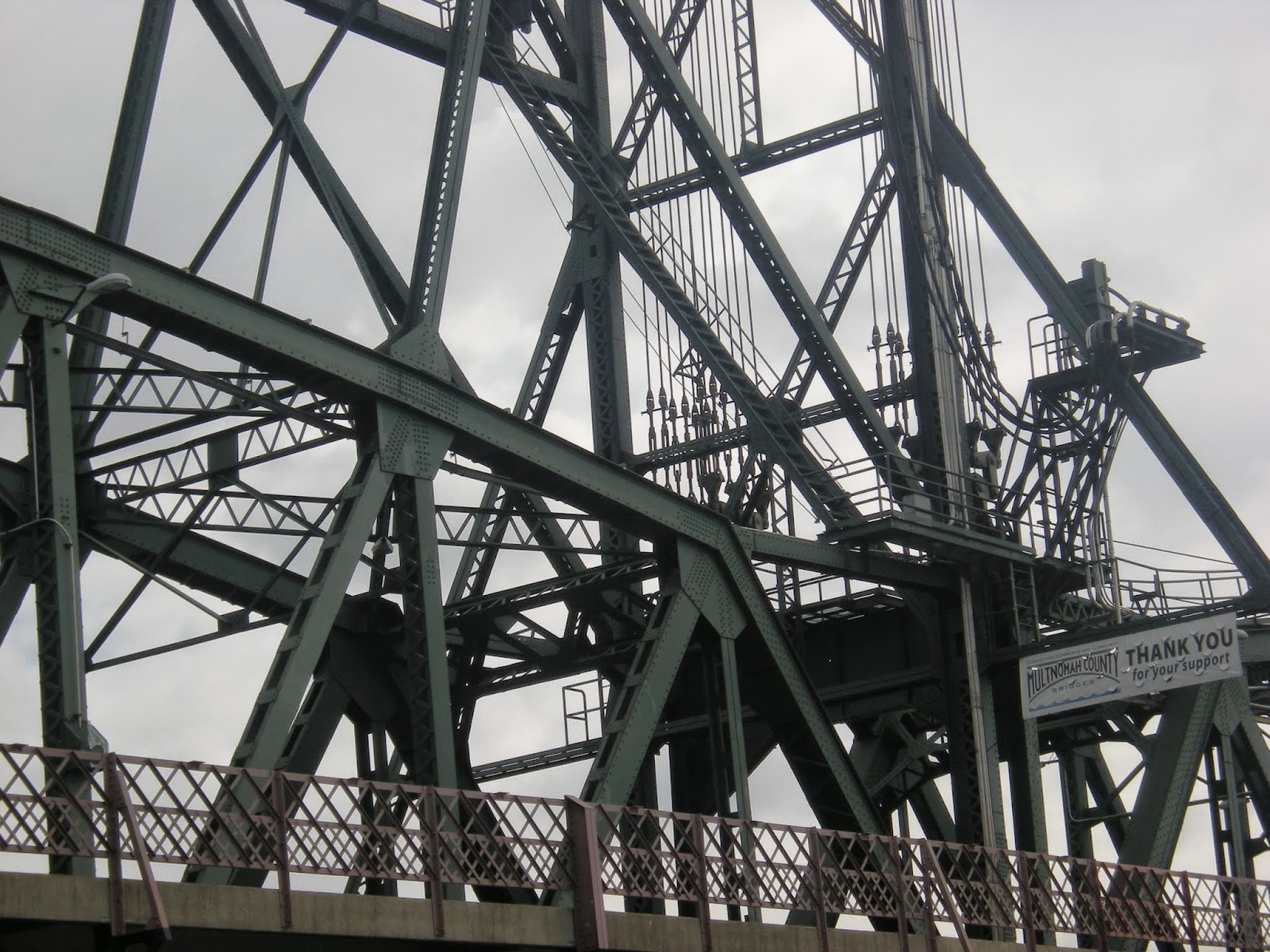 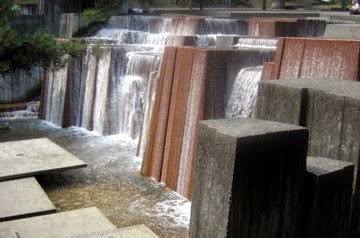 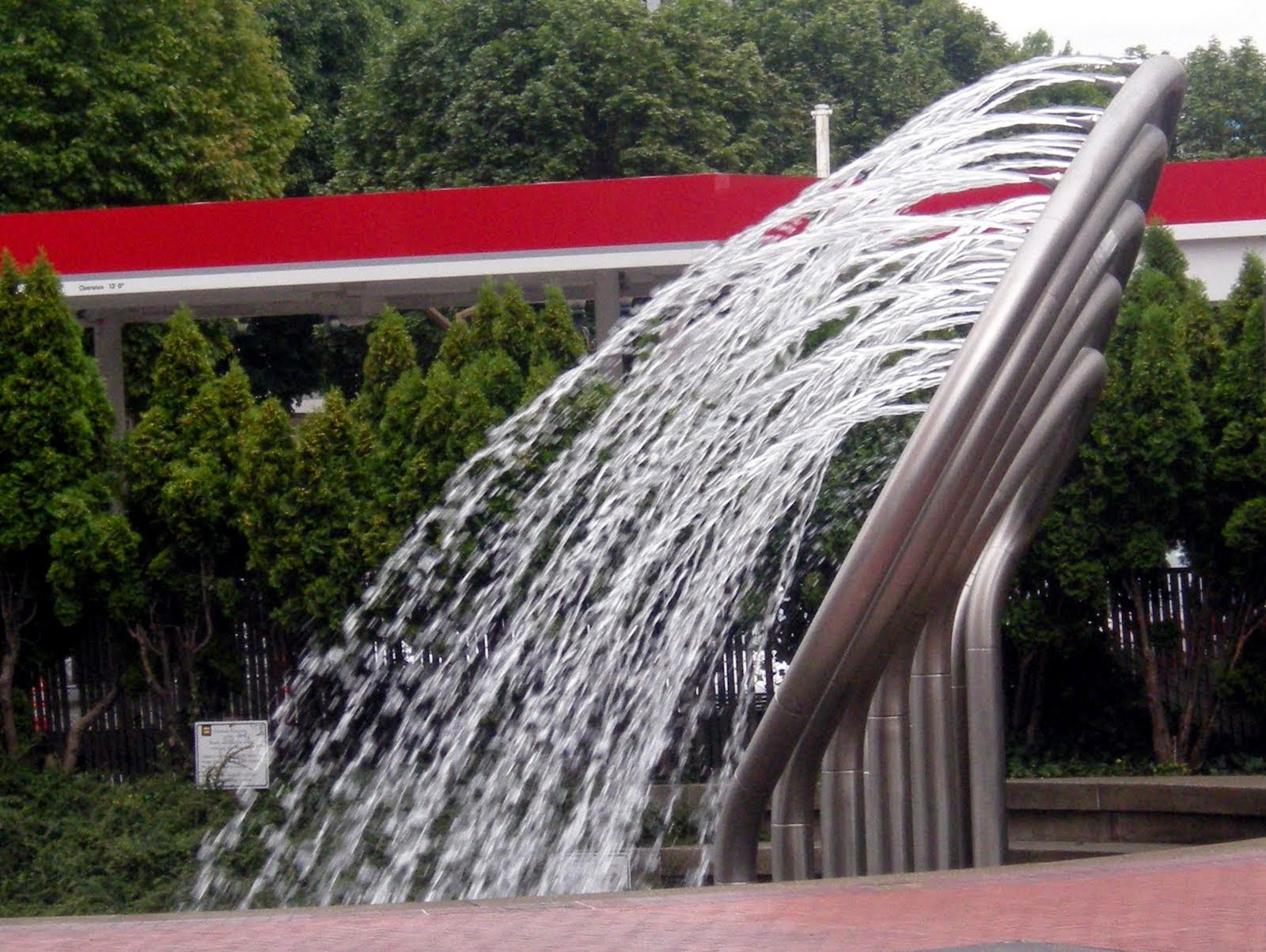 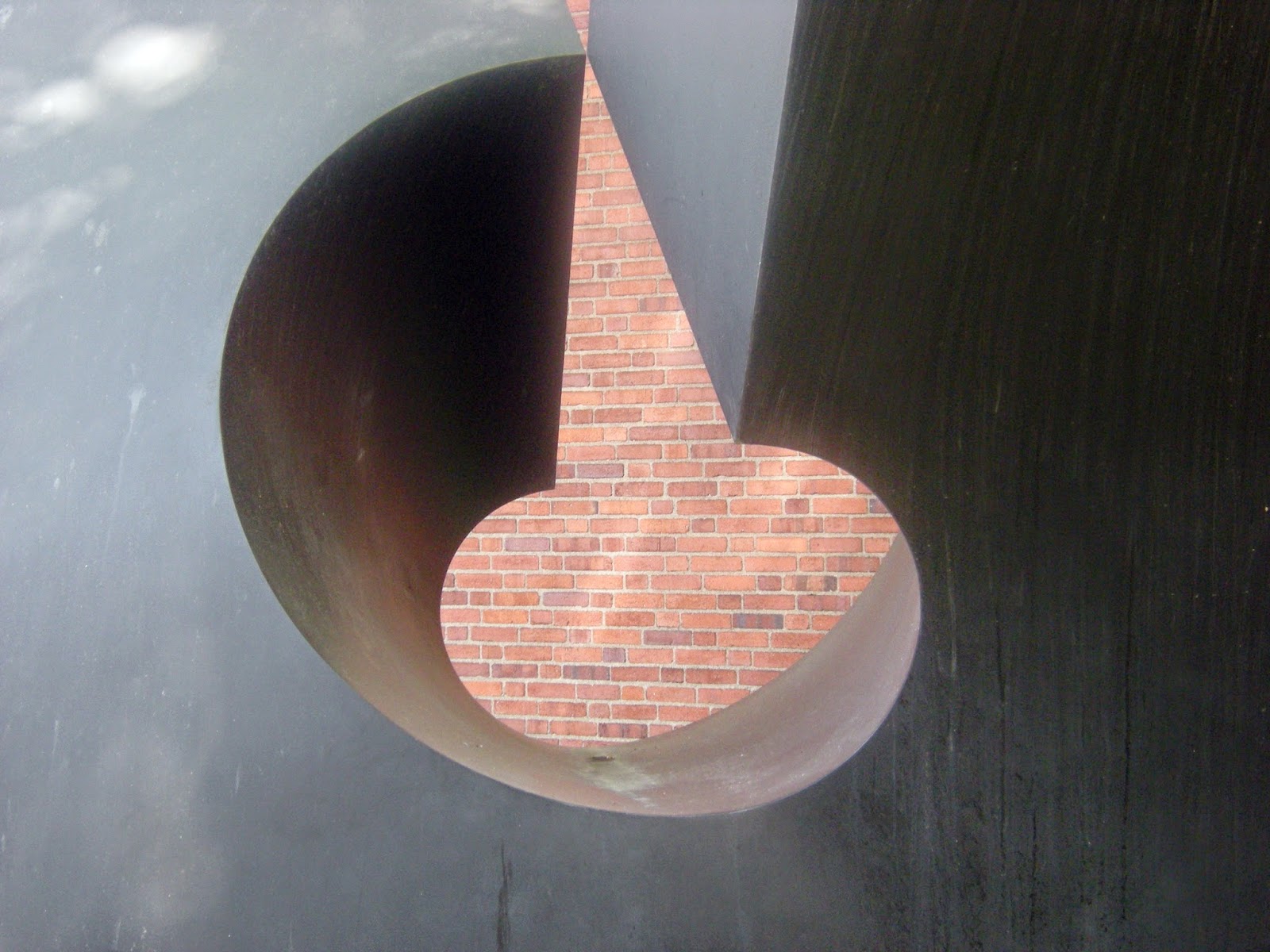 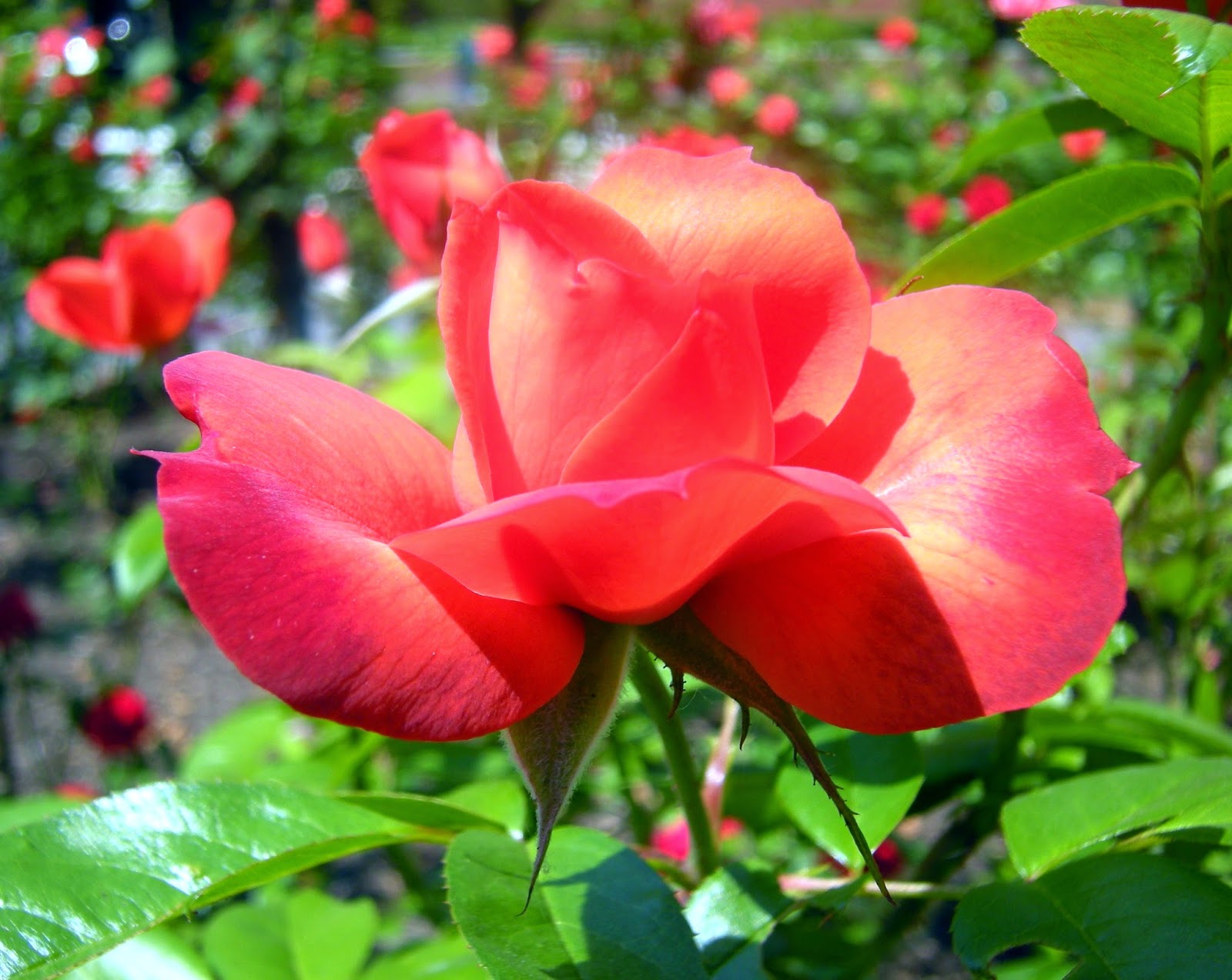 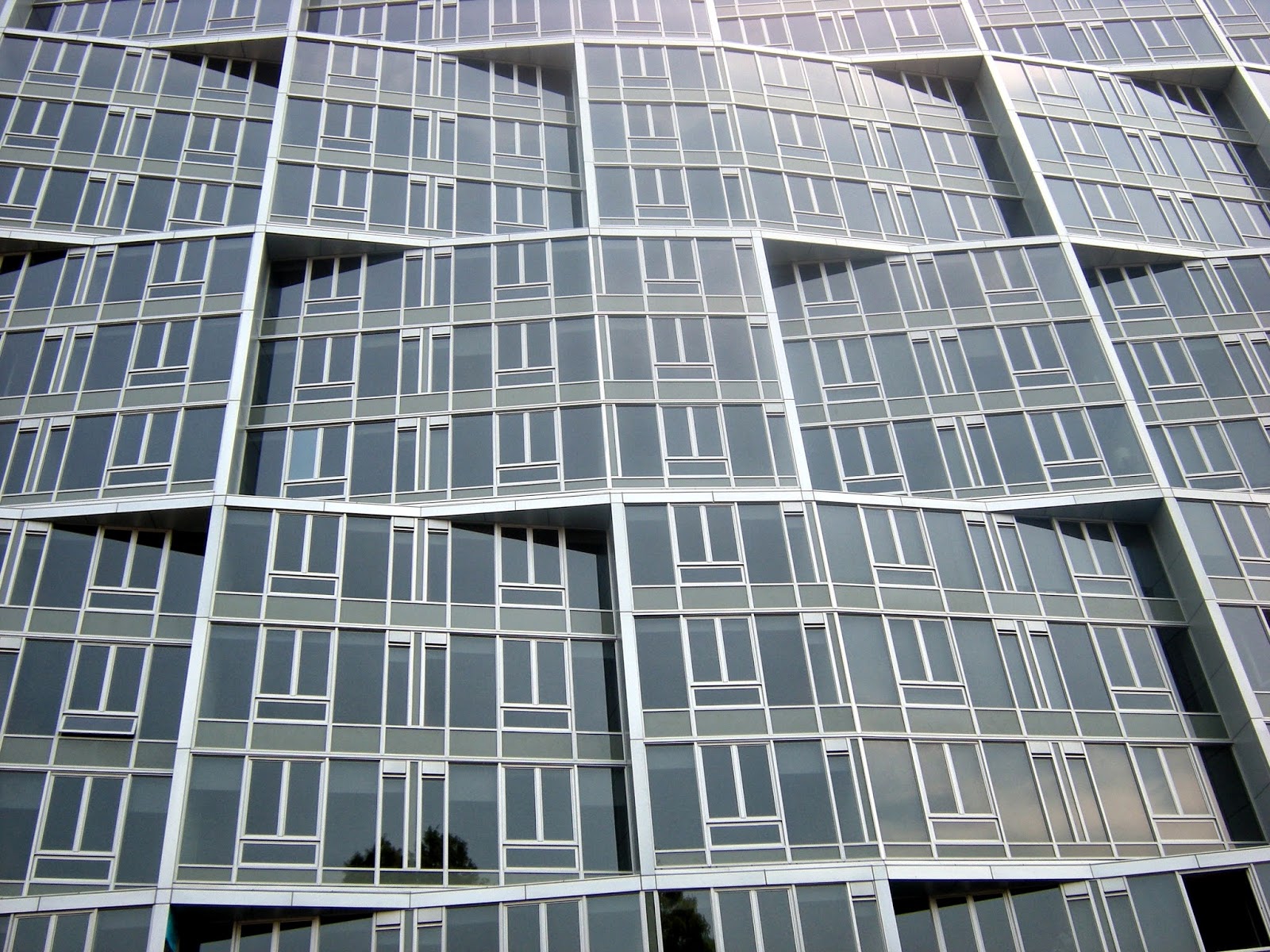 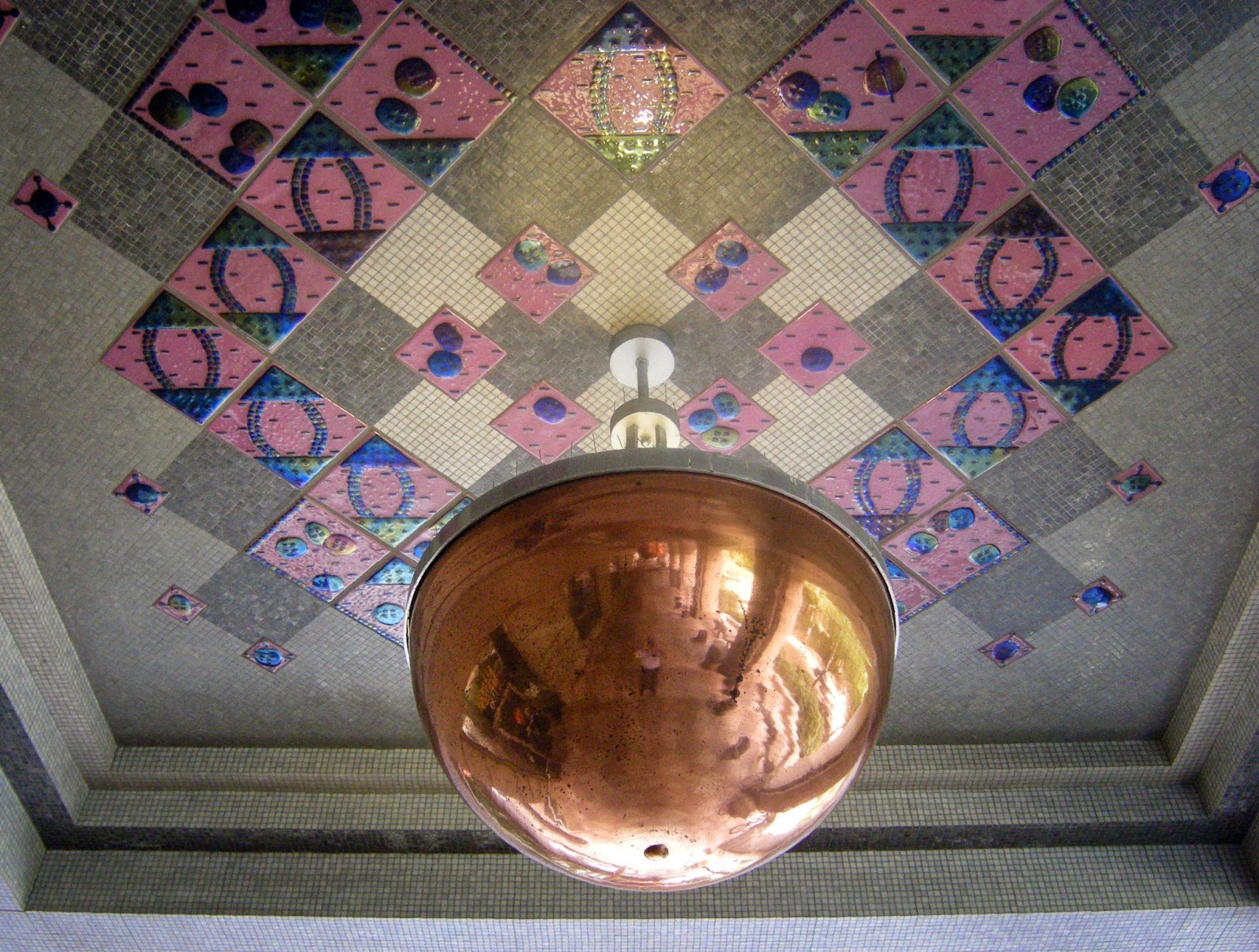 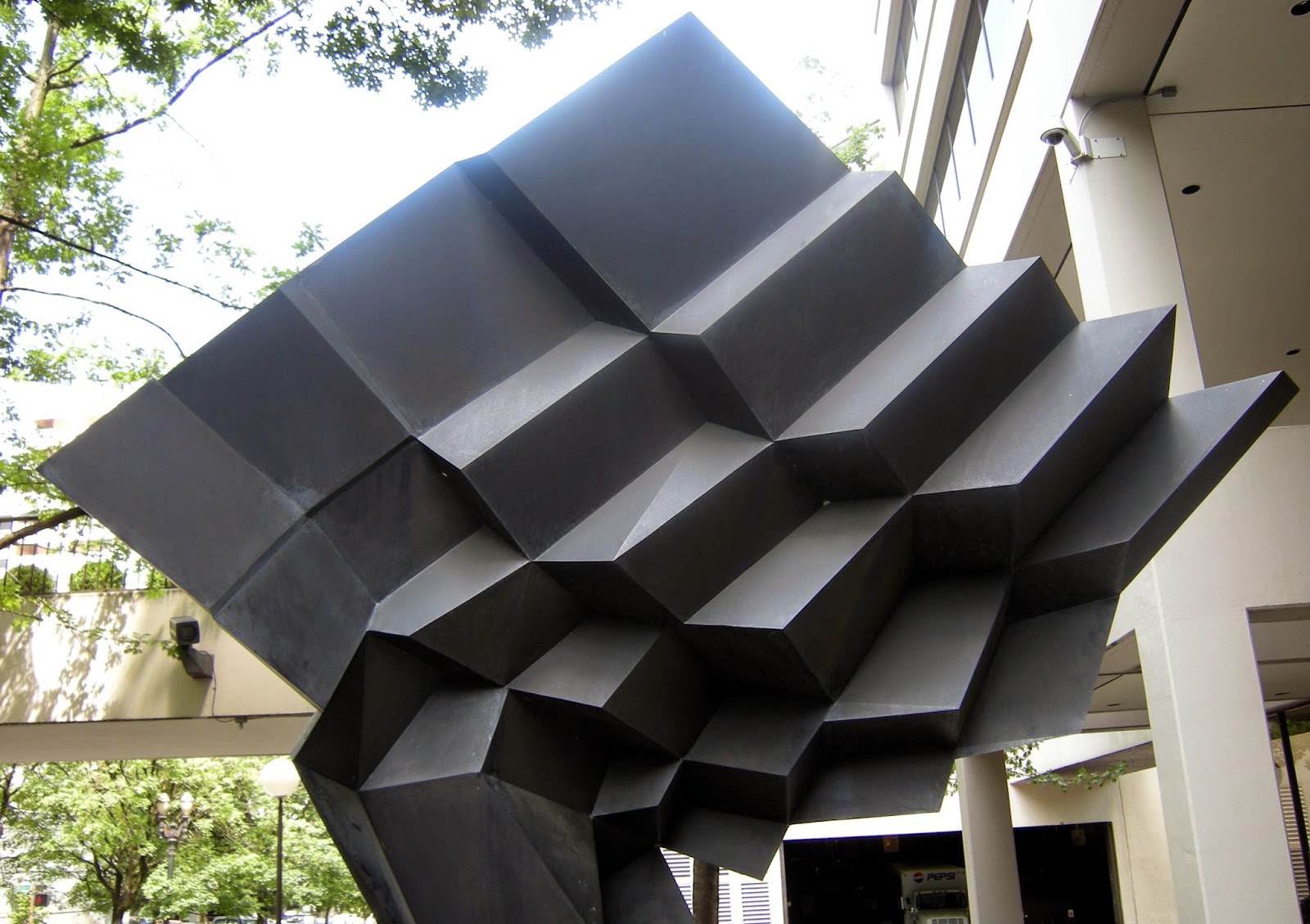 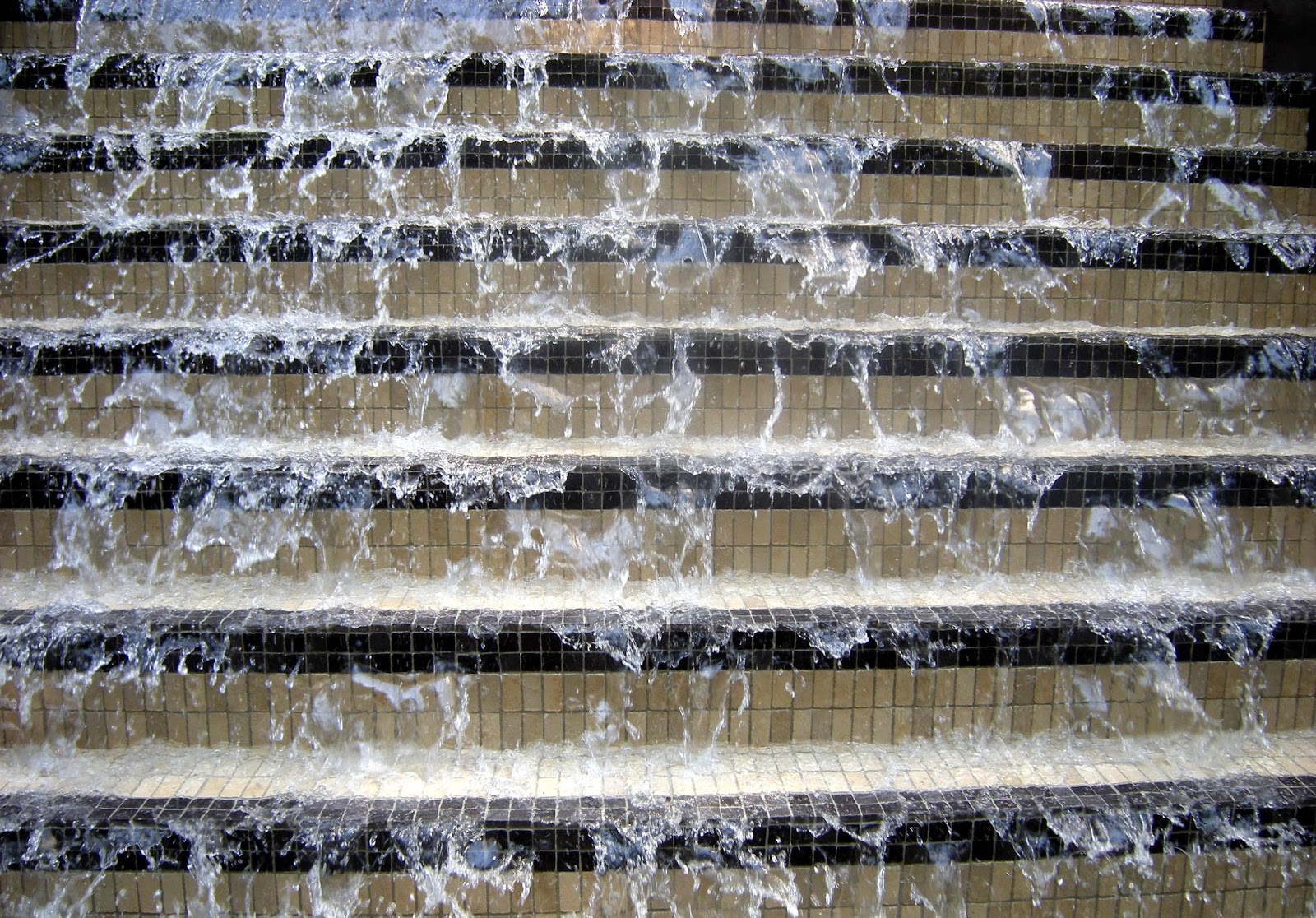 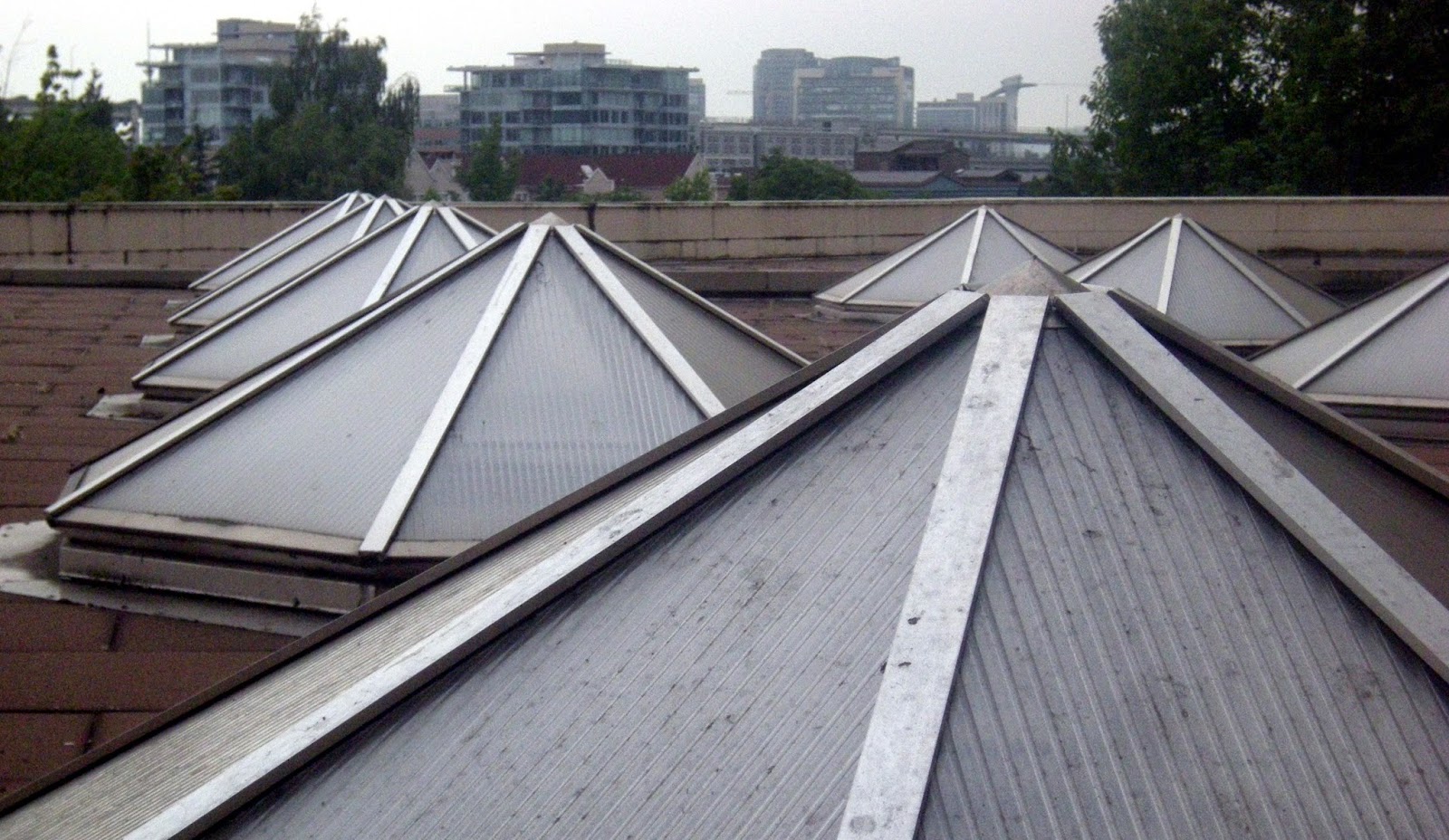 A Field Guide to Math on the National Mall

Mathematics abounds in the world around us. Here are more than a dozen sights (sites) at or near the National Mall in Washington, D.C., where you can catch glimpses of triangles and trapezoids, knots and Möbius strips, fractals and pyramids, and more. Join us for a mathematical treasure hunt among the monuments, museums, and fields at the heart of the nation's capital. 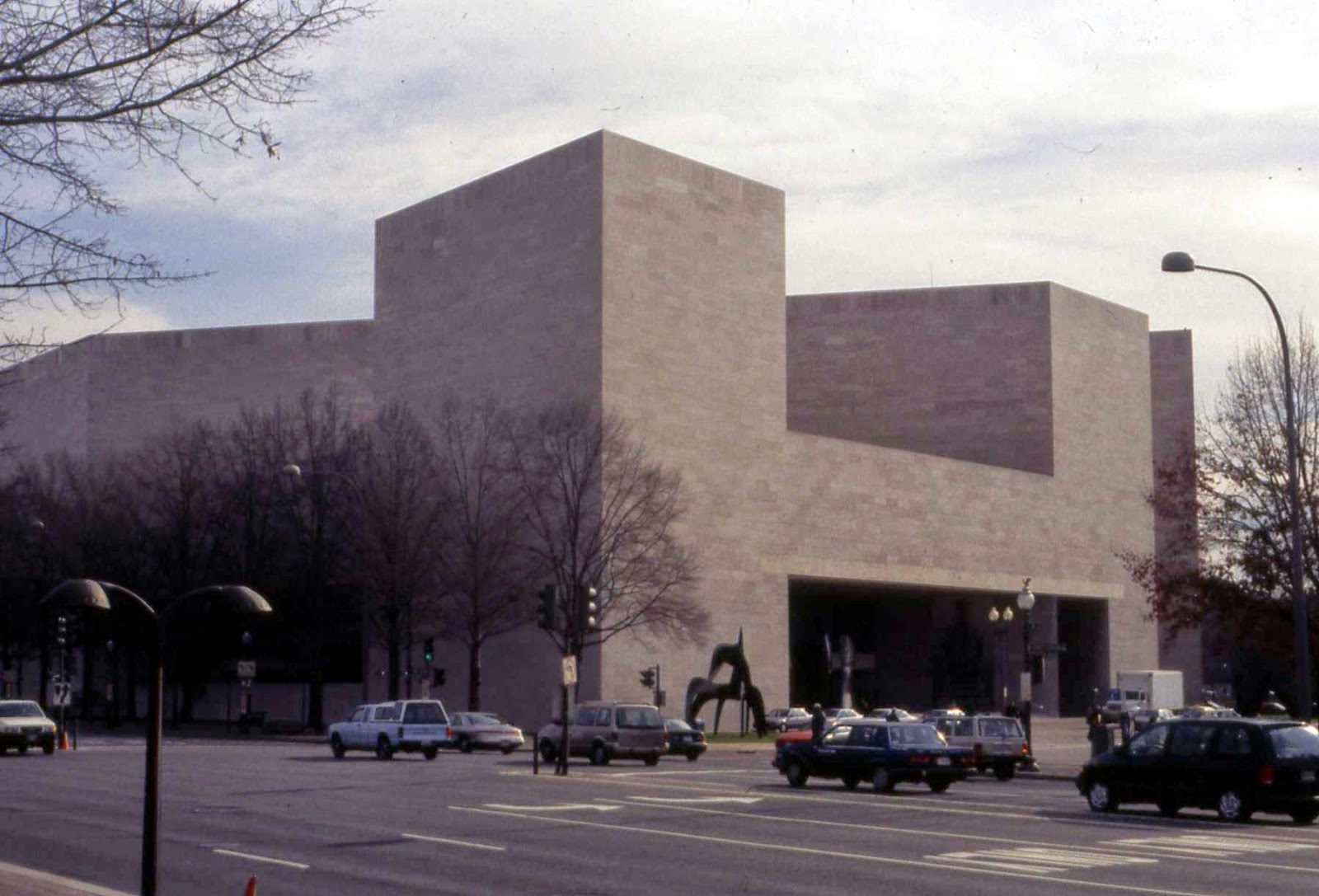 The National Gallery of Art's East Building is characterized by vast walls that meet at oblique angles. It sits on a four-sided site shaped like a trapezoid, with one side running diagonally. Architect I.M. Pei came up with his design for the building by splitting the trapezoid into an isosceles triangle and a smaller right triangle, creating an abundance of acute and obtuse angles. Triangles serve as the structure's basic motif.

For more, see the blog post "Splitting a Trapezoid."

The National Gallery of Art's East Building has one particularly sharp corner, visible to the right of the the building's H–shaped, west-facing façade. There, two walls meet at 19° to form the apex of a narrow triangle. If you look closely at the corner, you'll see a smudge darkening the lavender-pink marble. Over the years, so many people have touched the corner that their hands have collectively left a distinctive mark. It stretches about two feet, tapering off at its upper and lower ends. In effect, it is a population distribution, representing all the people who have reached out to the enticing corner. 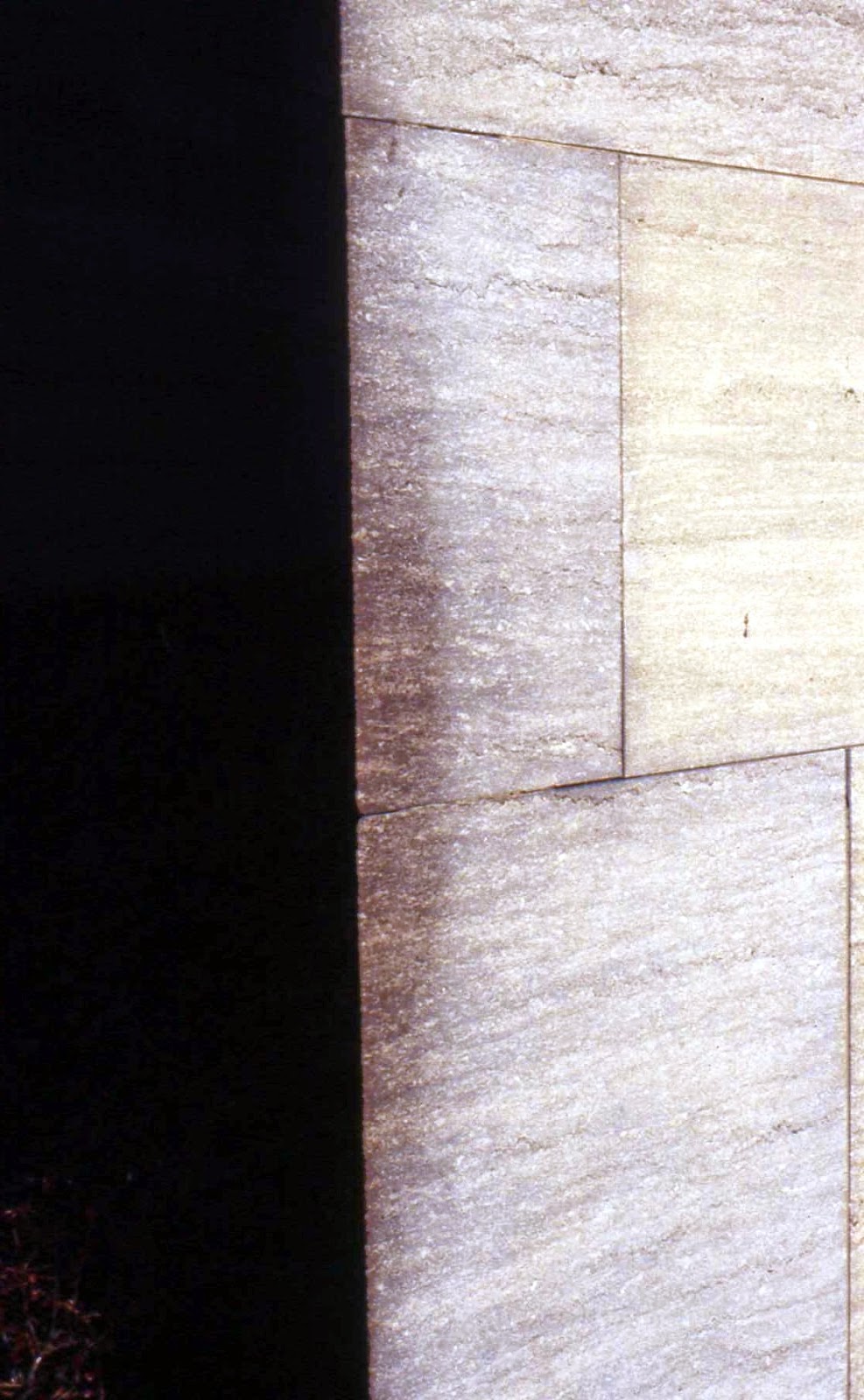 For more: "An Irresistible Edge" 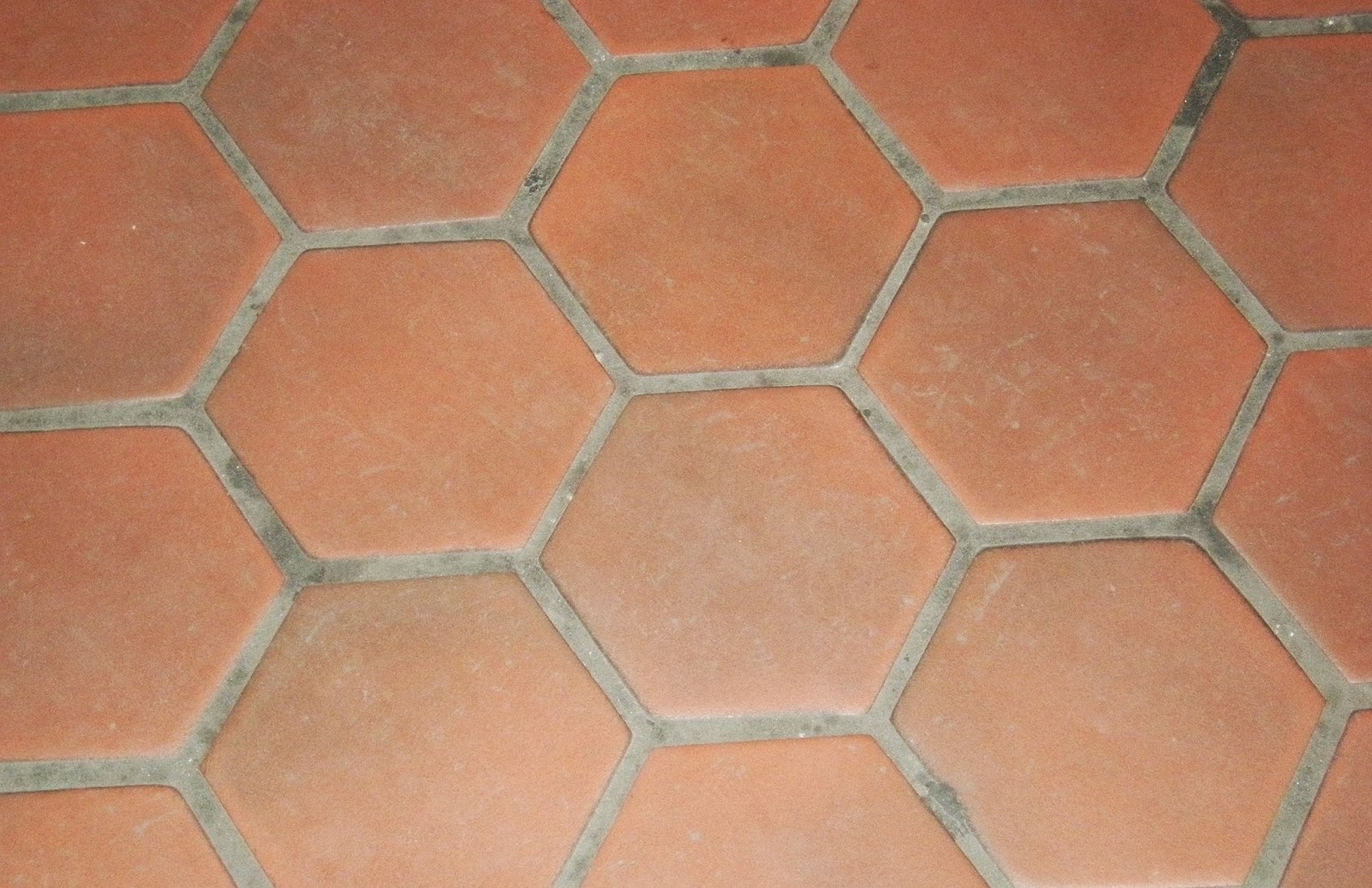 Regular hexagons fit together without gaps to cover a surface, as seen in the floor tiles of any MetroRail station. Such hexagons have three pairs of parallel sides, a handy feature for nuts and bolts that can be tightened or loosened using a standard wrench. Regular pentagons, on the other hand, don't fit together neatly to cover a surface completely, and such pentagons have no parallel sides. A fire hydrant has pentagonal lug nuts, which make them wrench-proof. 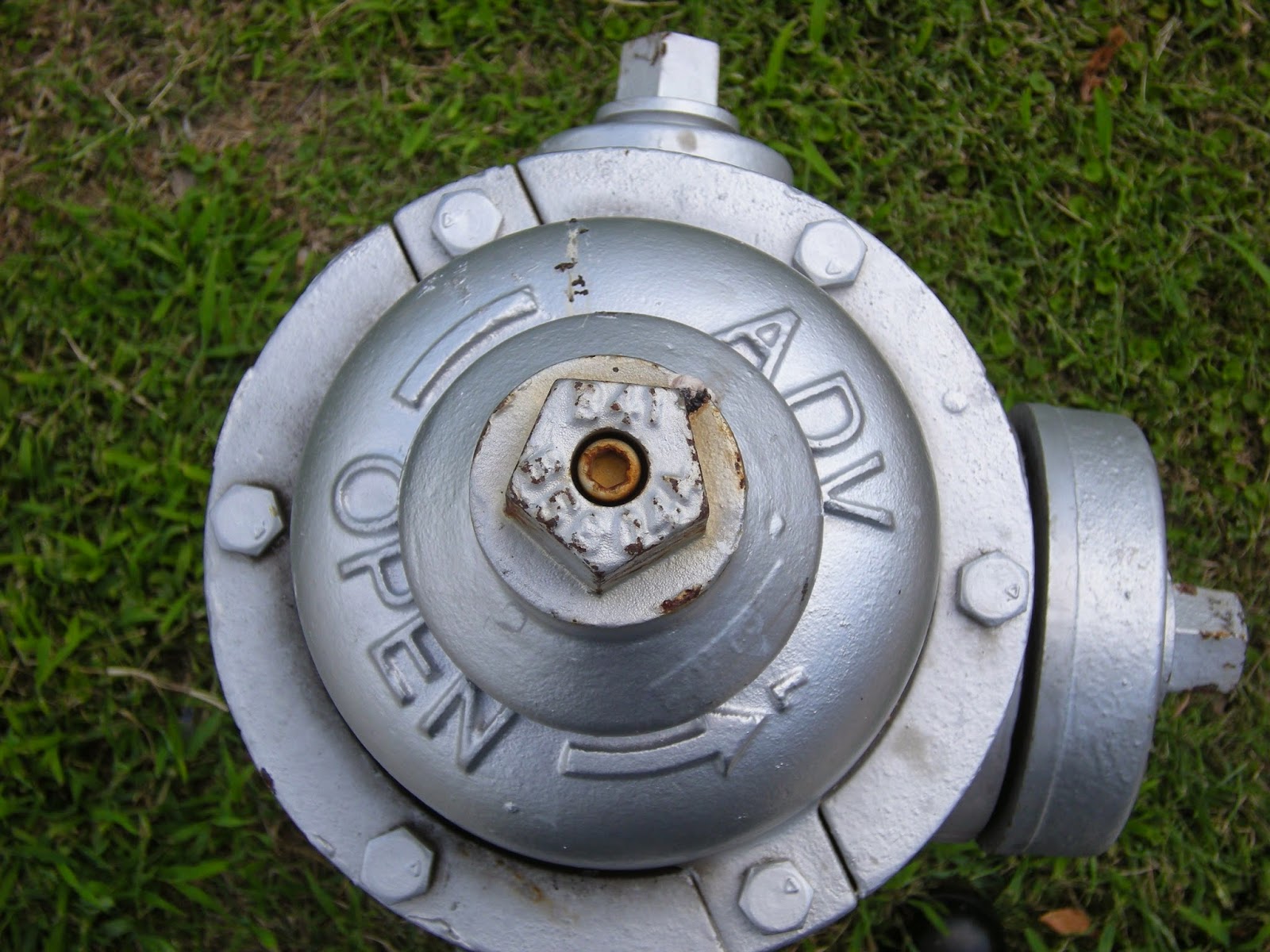 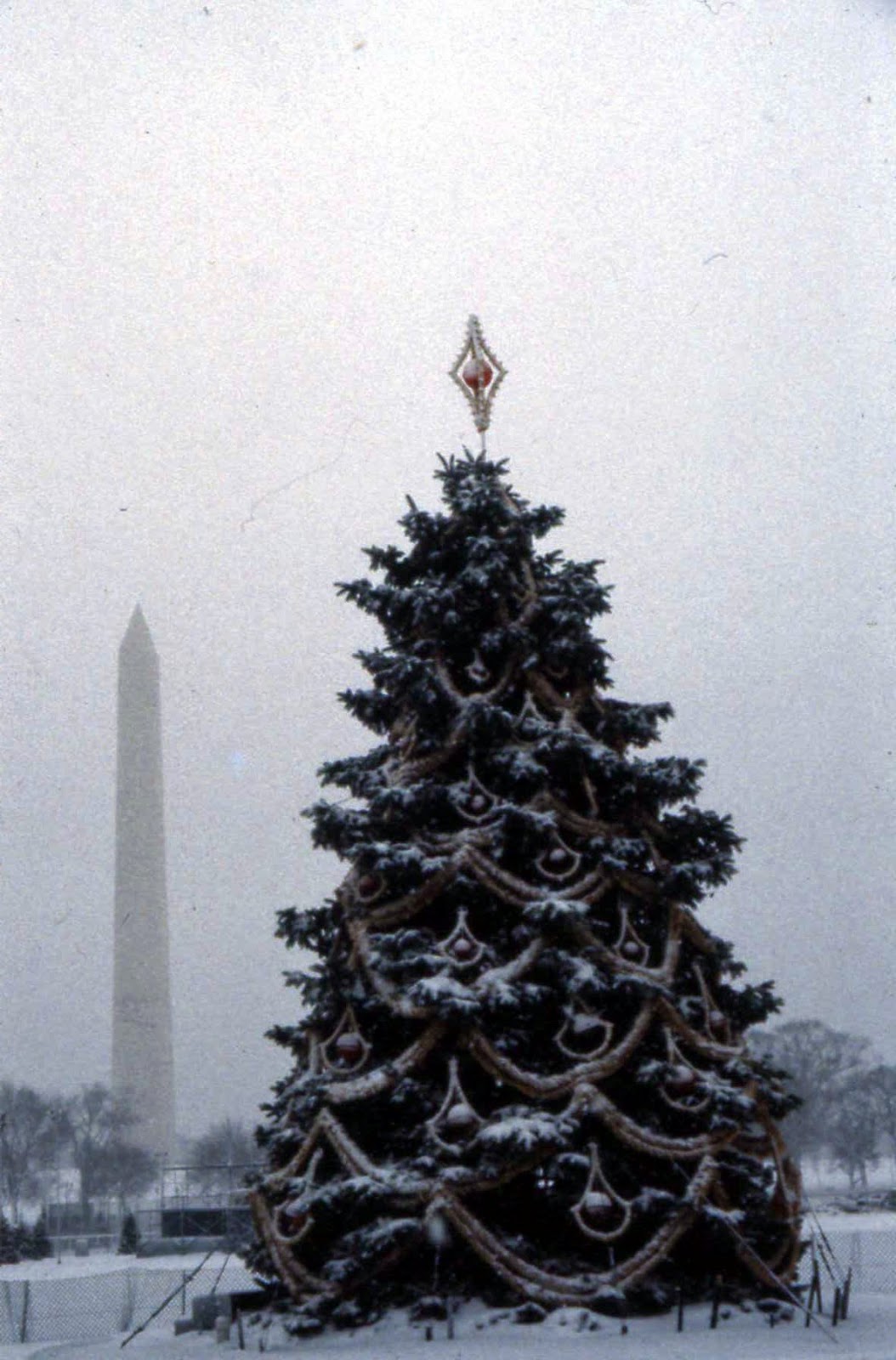 The straight lines of the Washington Monument contrast sharply with the intricately branched structure of the National Christmas Tree. Nature is full of shapes that repeat themselves on different scales within the same object—branching plants, puffy clouds, rugged coastlines, craggy mountains, and jagged lightning bolts. Mathematician Benoit Mandelbrot coined the term "fractal" as a convenient label for such self-similar shapes, which are difficult to describe using conventional geometry. 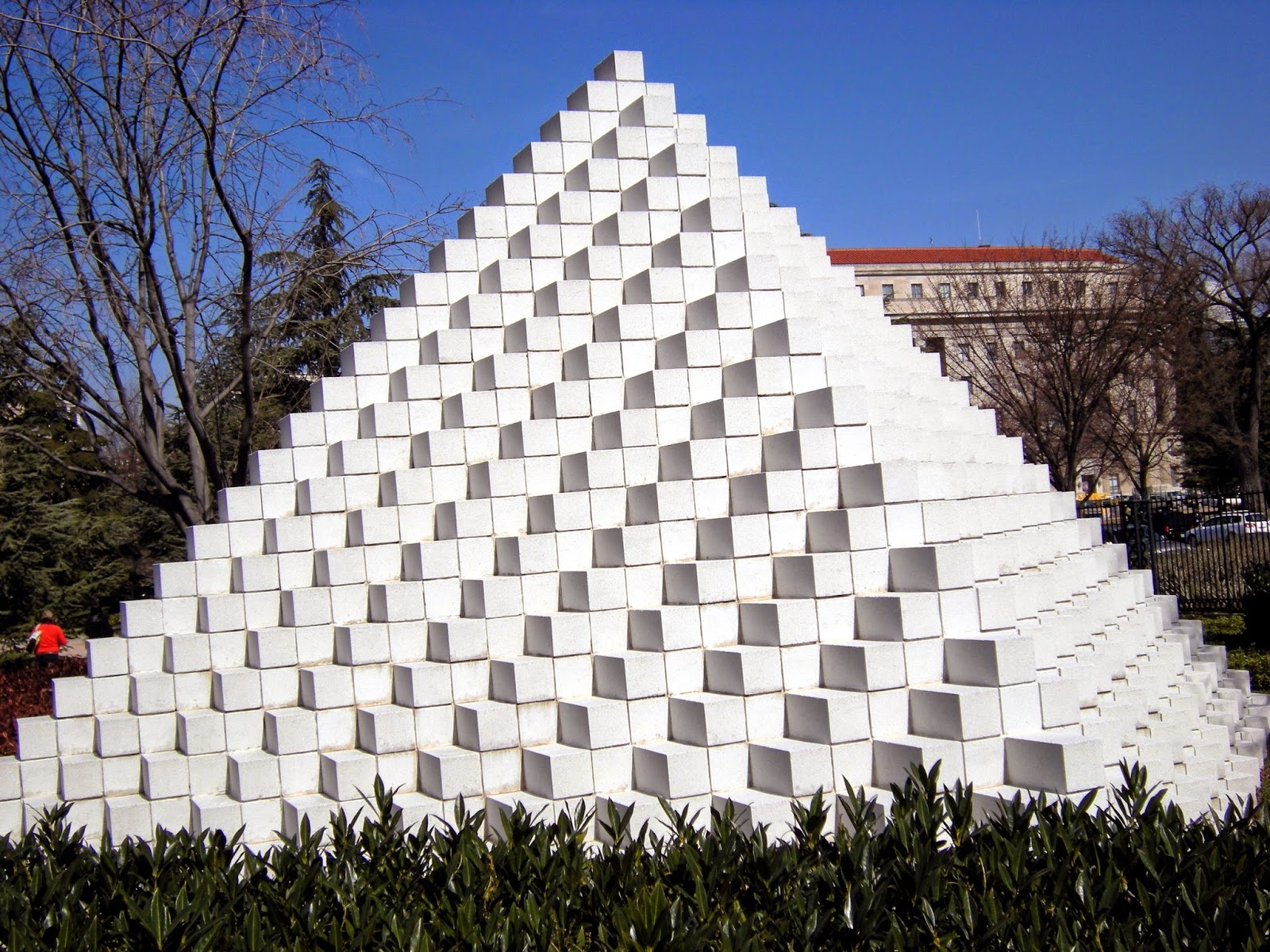 Sol LeWitt's Four-Sided Pyramid at the National Gallery of Art Sculpture Garden consists of concrete blocks stacked to form a stark, eye-catching pyramid. Although the blocks are rectangular—each one equivalent to two cubes attached side by side—LeWitt's structure can look like a huge pile of cubes from some viewpoints. At the same time, the pyramid is highly symmetrical. Can you use that symmetry to help calculate how many blocks make up the pyramid's faces without counting all of them? 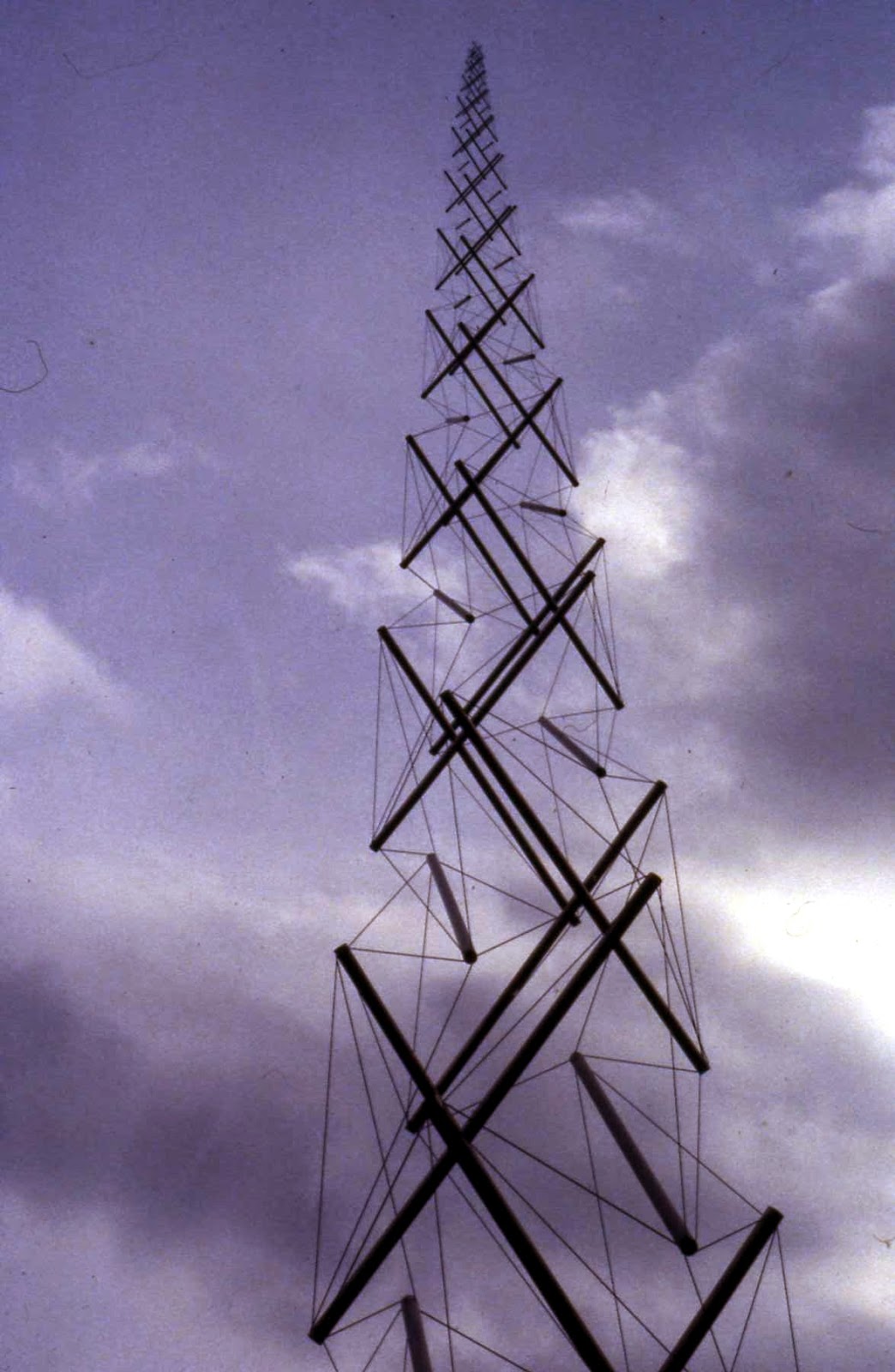 Erected beside the Hirshhorn Museum and Sculpture Garden, Kenneth Snelson's Needle Tower stretches 60 feet into the sky. This tapered framework of aluminum tubes and stainless-steel cables is an example of a tensegrity structure. The tubes aren't connected to each other. Instead, cables connect the tubes to hold the assemblage together in perfect balance. When you venture underneath and look up, you see a striking pattern of six-pointed stars, a consequence of the fact that each layer of a tensegrity structure must consist of three tubes. 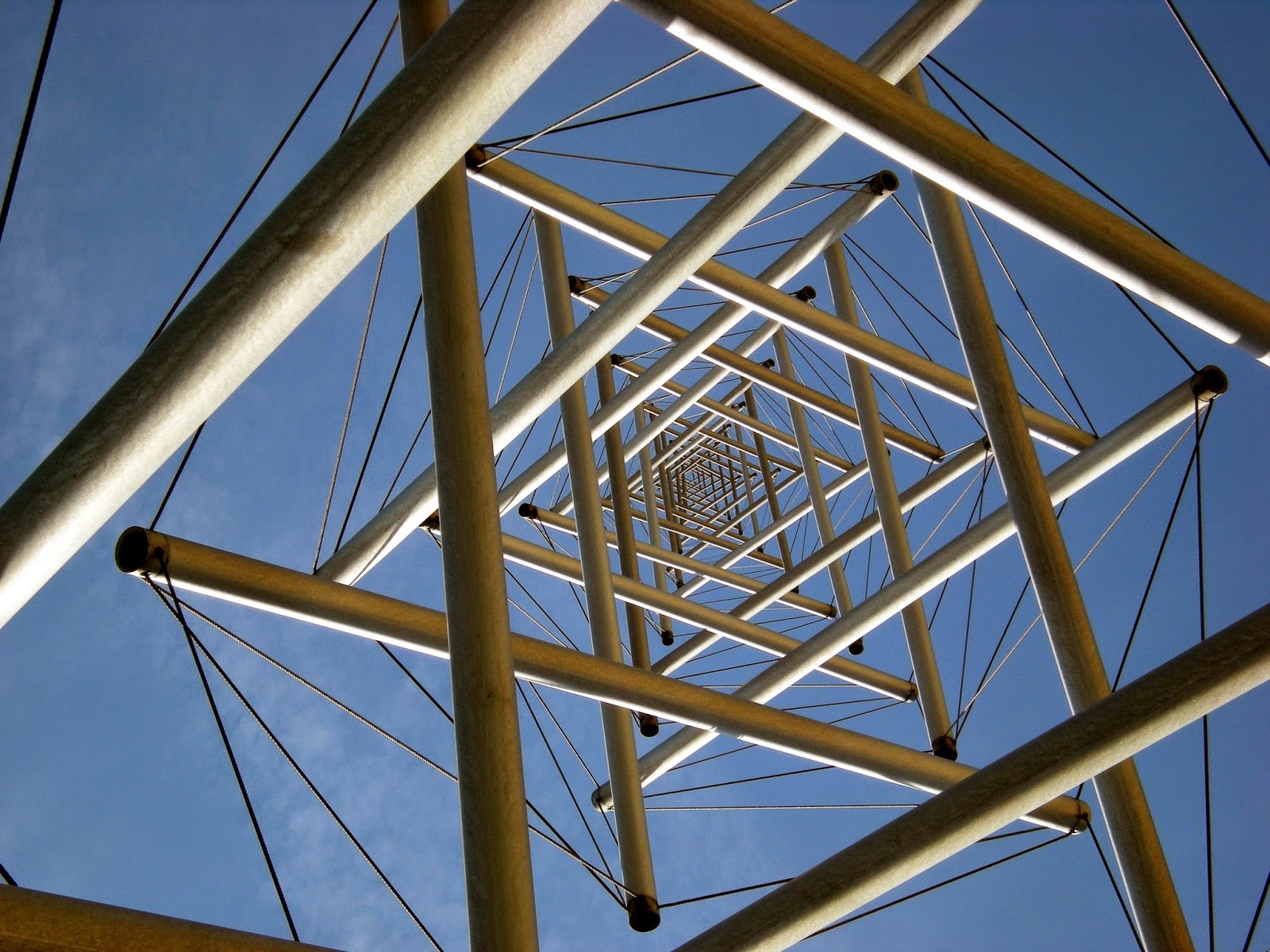 A complicated, twisty form stands guard at the entrance to the National Air and Space Museum. Created by architect and sculptor Charles O. Perry, the sculpture is called Continuum. Perry describes his artwork as a Möbius surface of seven saddles, designed to represent the continuum of the universe. In effect, despite its confounding twistiness, the sculpture has just one continuous surface and one edge—just like a Möbius strip. 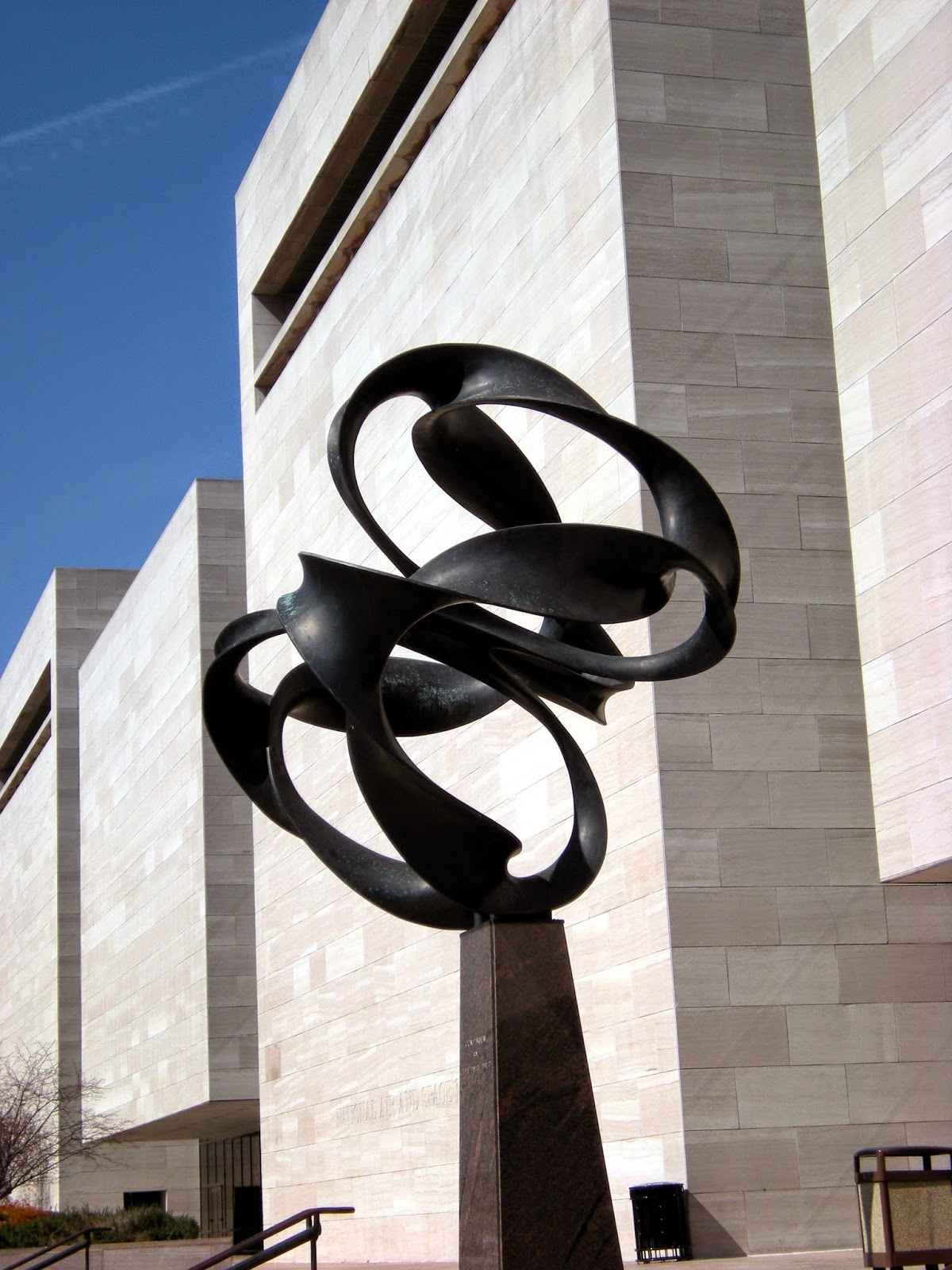 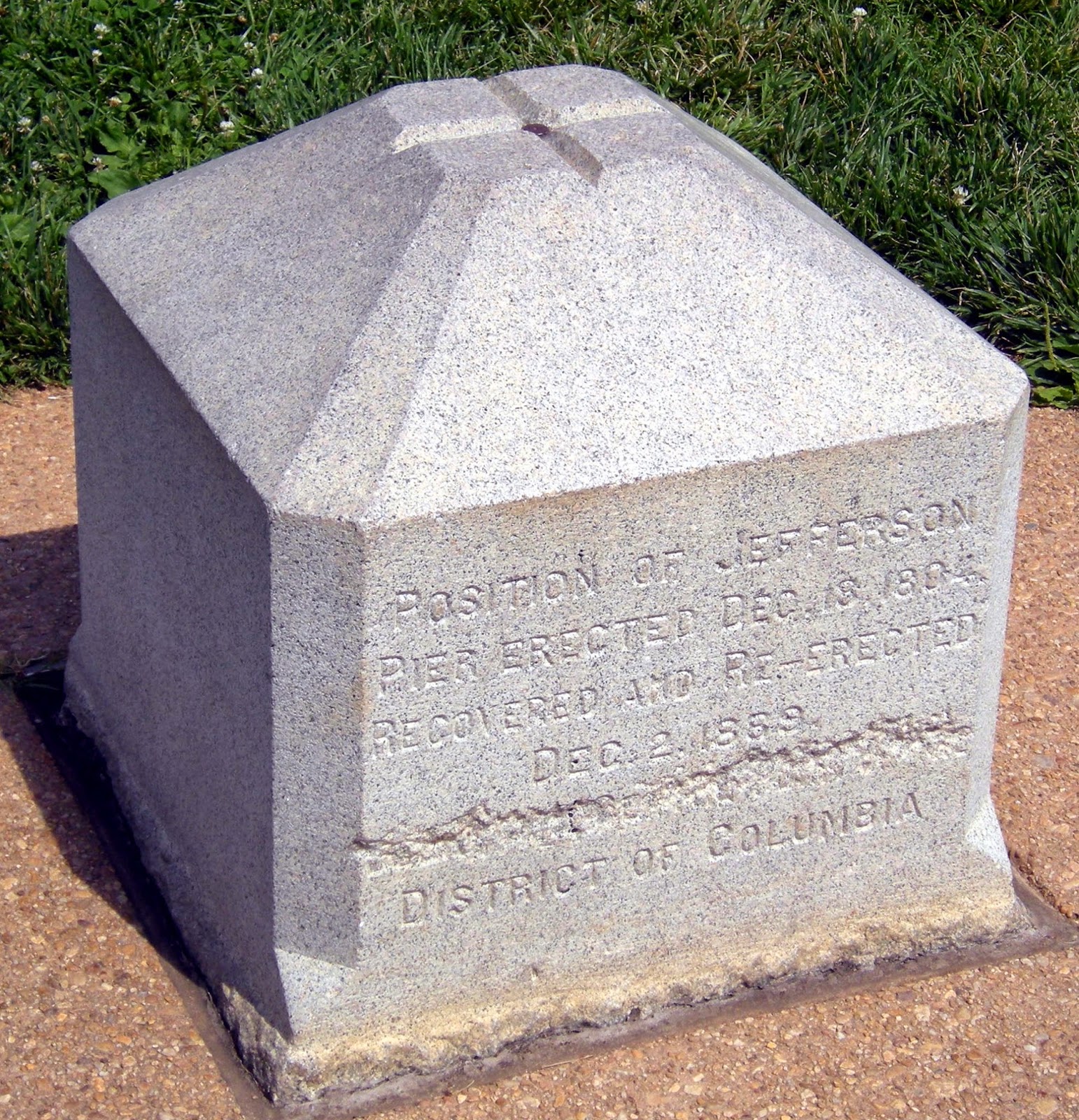 Washington, D.C., was planned around a right triangle, with the White House at its northern vertex and the U.S. Capitol at its eastern vertex, joined by Pennsylvania Avenue (as the hypotenuse). A stone marker (shown above), commemorating the Jefferson Pier, stands at the 90° vertex, a short distance north and west of the Washington Monument. The marker, with the White House due north and the Thomas Jefferson Memorial due south, is on what was once the prime meridian of the United States. An equestrian statue of President Andrew Jackson stands on the meridian north of the White House. 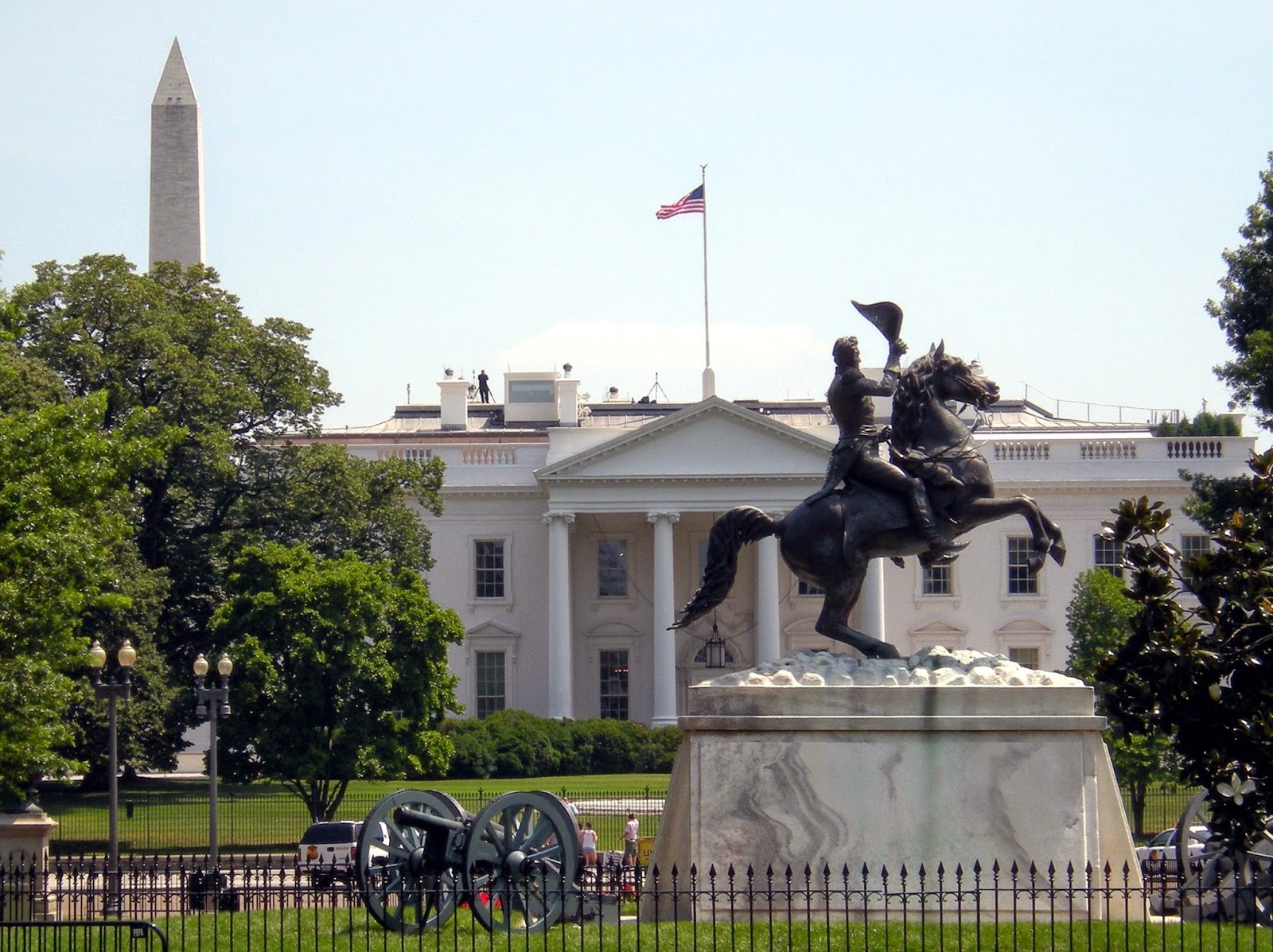 For more: "The Washington Right Triangle"

It's hard to miss the triangle of three bent arrows that signifies recycling. You can find it on bins and packaging, in magazines and newspapers, and elsewhere. Created in 1970, the design was based on a Möbius strip to symbolize continuity within a finite entity. Have you noticed, however, the two versions of this symbol? In its original form, just two of the three arrows have the same twist, while in the mutant form all three arrows twist the same way. Does this mutant form also have the one-edged, one-sided surface characteristic of a Möbius strip? 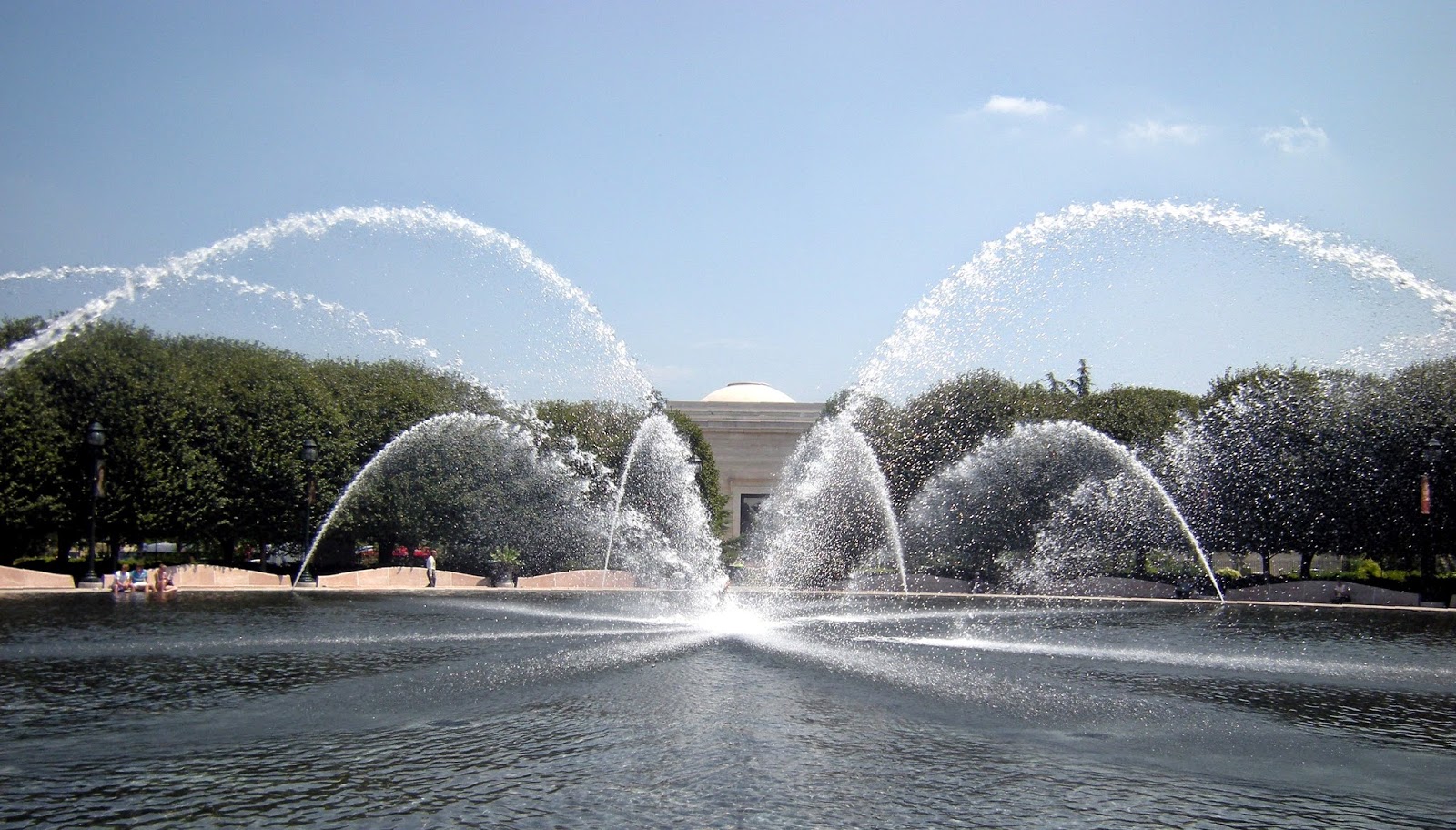 Whether spraying graceful arcs of water into the air or letting water tumble down steep slopes, outdoor fountains draw attention. One factor that makes some fountains more spectacular than others is the angle of the jets that send water in parabolic paths. Angles between 50° and 60° seem to produce the most spectacular sprays, either enclosing the largest possible volume or having the greatest total surface area. The fountain at the National Gallery of Art Sculpture Garden is a notable example.

For more: "The Geometric Spectacle of Water Fountains" 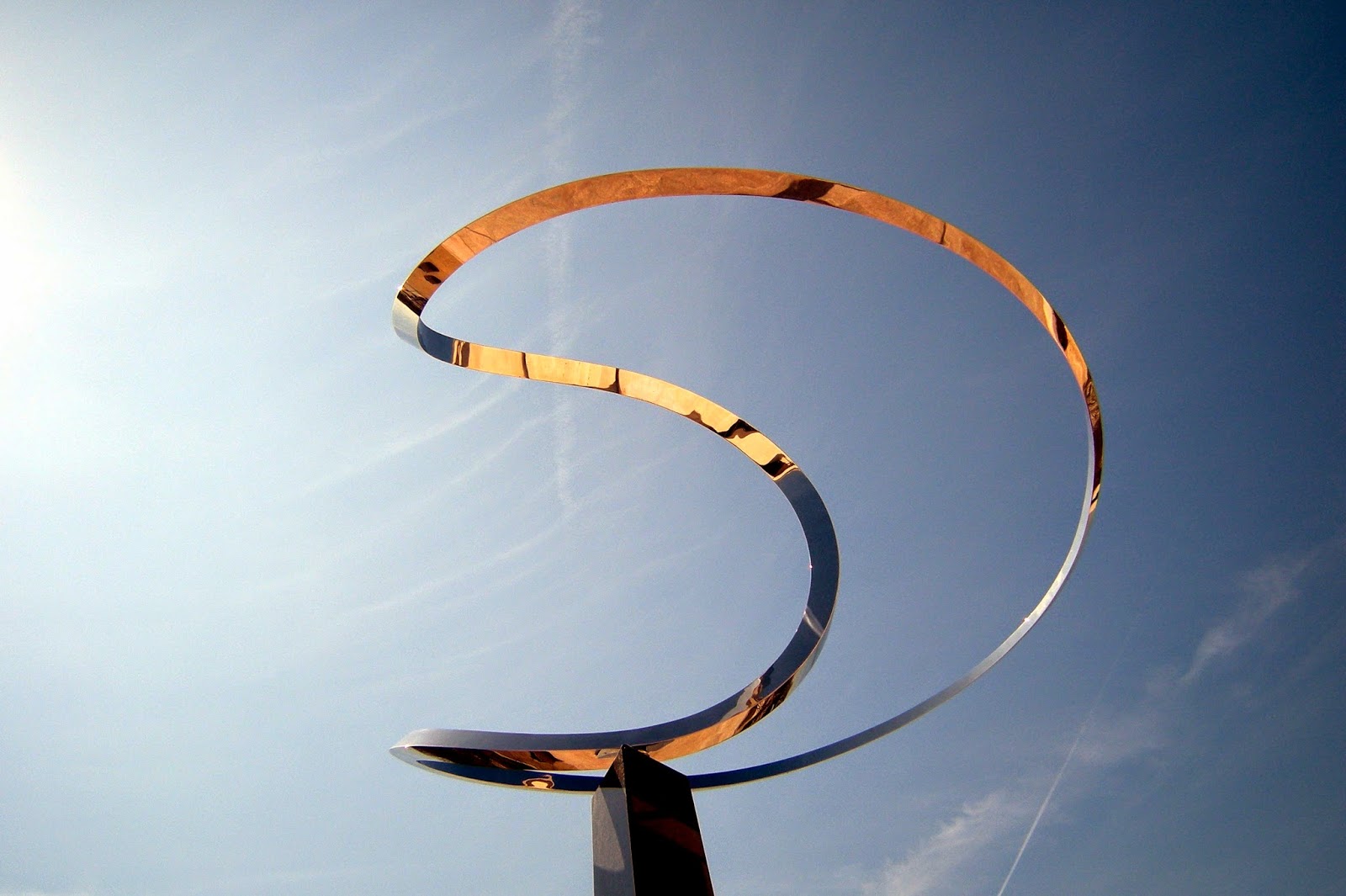 Eight feet tall and 16 feet wide, a stainless-steel loop revolves once every eight minutes atop a black granite pillar in front of the National Museum of American History. Designed by José de Rivera, who titled the piece Infinity, the looped sculpture is a three-dimensional analog of a Möbius strip. The loop's cross section is an equilateral triangle, and this triangle rotates through 120° before the ends meet to form a complete loop. Instead of three surfaces, the final product has just one continuous surface that runs three times around the loop.

For more: "Infinity in Eight Minutes"

The carved stone decorations on the Bullfinch Gate House, located near the White House, look like mathematical knots. Mathematically, a knot is a one-dimensional curve that winds through itself in three-dimensional space and catches its own tail to form a loop. If the loop has no knot in it and can be made tangle-free to look like a circle, mathematicians call the loop an unknot. Are the Gate House designs true knots or merely disguised unknots?

For more: "Loops, Knots, and Unknots"

Manhole covers are usually circular and often feature geometric designs. It's rare to find one that is 12-sided (dodecagonal), like some of the manhole covers near the U.S. Capitol. These covers also feature a hexagonal grid and a curious pattern of holes. 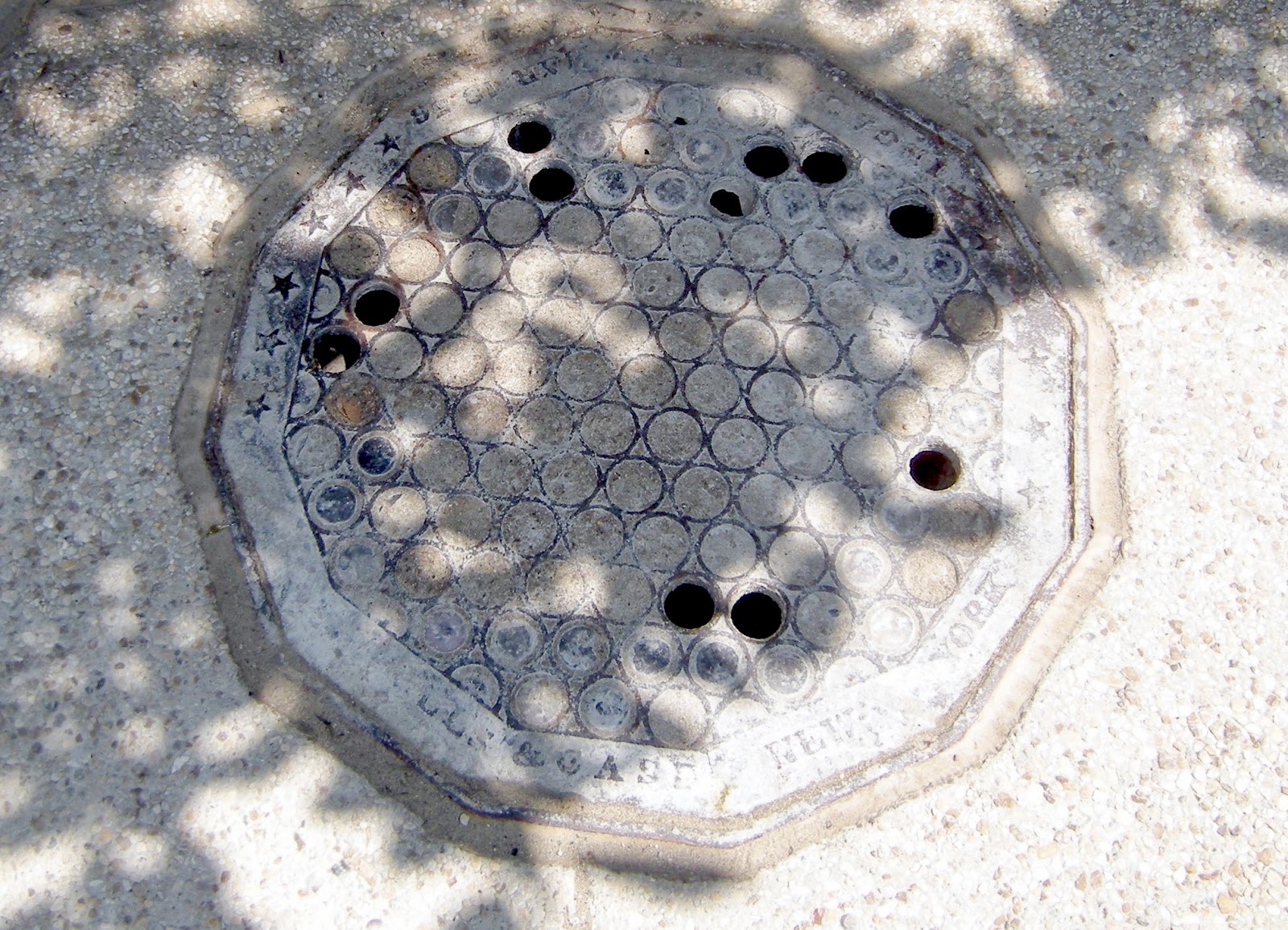 Signs at street corners in Washington, D.C., give not only the street name but also a numerical indicator representing the numbers assigned to a given block—typically in multiples of 100. As you approach the U.S. Capitol, you see signs, block by block, saying 600, 500, 400, 300, 200, and 100. Then what happens? Would the signs say 000? Instead, city planners chose the designation “unit” to mark blocks with street numbers from 1 to 99. 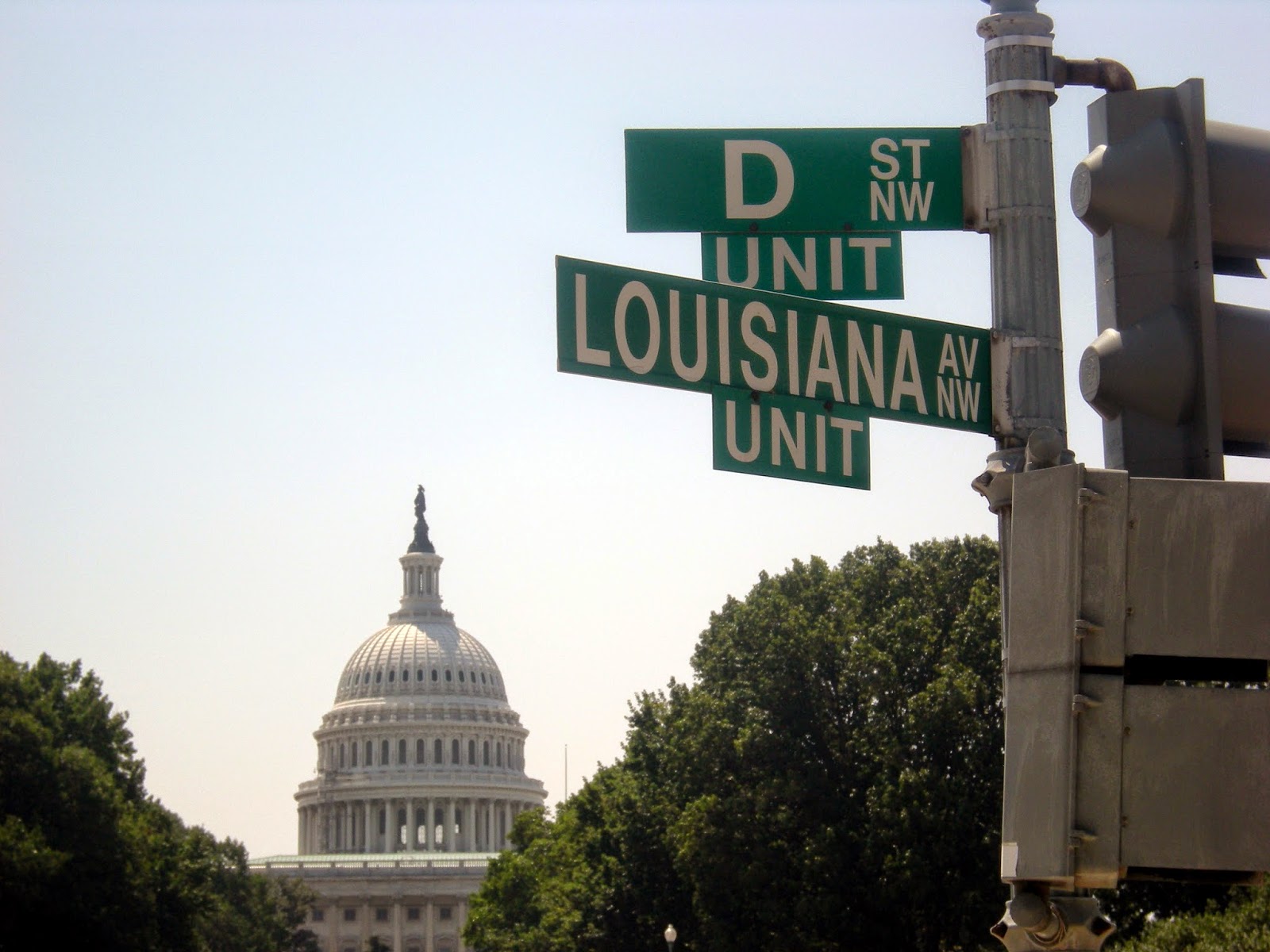 See the MAA's page on "A Field Guide to Math on the National Mall" to download a brochure (PDF) featuring these fourteen sights.

Photos by I. Peterson
Posted by Math Tourist at Sunday, May 11, 2014 No comments: