The intriguing mathematical object known as a Klein bottle has only one surface. In effect, it has an outside, but no inside.

In abstract terms, you can make a Klein bottle by starting with a rectangular piece of the plane. You join two opposite edges to create a tube. You then join the remaining two edges, but with the same sort of twist (so that the joined edges have opposite orientation) that you need to make a Möbius strip. The second step can't be carried out without the tube passing through itself.

A true Klein bottle exists only in a topologist's imagination. It has to intersect itself without the presence of hole—a physical impossibility. Nonetheless, that hasn't stopped illustrators and glassblowers from attempting to represent this remarkable object in some physical form. Movies.

To make one from glass, for instance, you could start with a stretchable glass tube. One end of the tube narrows into a long neck; the other end widens into a base. The neck passes through the side of the bottle, and the neck and the base join to make the neck's inside continuous with the base's outside.

Astronomer Cliff Stoll is among those who have succeeded in crafting glass Klein bottles. He now offers them for sale, in a wide variety of sizes and manifestations, at Acme Klein Bottle. 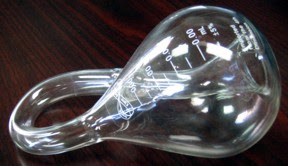 A genuine Acme Klein Bottle. Photo by I. Peterson. 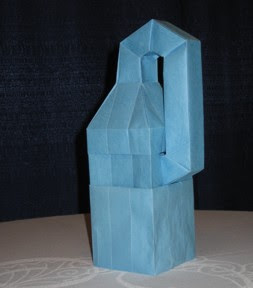 Lang later made available the crease pattern that he used to create his paper Klein bottle. Lang displayed his Klein bottle and various other objects at MathFest in August when he appeared at the A K Peters booth to sign copies of his book Origami Design Secrets: Mathematical Methods for an Ancient Art. 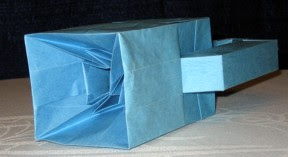 There are other frontiers in the realm of Klein bottle visualization. The bottle form is just one of several ways to represent this mathematical object. Indeed, the Klein surface can take on many shapes that don't look at all like bottles. One version looks like a ring pinched so that it has a figure-eight cross section. But the orientation of the figure eight changes in going around the ring. 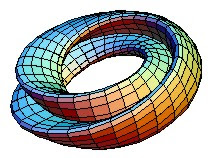 On the construction side, Andrew Lipson specializes in building mathematical objects out of LEGO bricks. He has made a hinged Klein bottle out of bricks and other pieces. His hinged construction shows how a Klein bottle, cut in half lengthwise, becomes two Möbius strips.

Banchoff, T.F. 1998. Surfaces Beyond the Third Dimension: The Klein bottle. In Communications in Visual Mathematics.

Among the three mathematics journals published by the Mathematical Association of America, The College Mathematics Journal (CMJ) has the shortest history. It started in 1970 as The Two-Year College Mathematics Journal, published by Prindle, Weber & Schmidt in collaboration with the MAA. Issues initially appeared twice a year. As the title suggests, its focus was on the teaching of mathematics in two-year colleges. It was meant to be a forum for mathematicians interested in the special curricular and pedagogical challenges presented by such institutions.

In 1984, the publication became The College Mathematics Journal, published five times per year. Instead of focusing solely on the concerns of two-year colleges, the renamed journal was to serve all who were interested in the earlier years of college-level mathematics, especially the first two years. Editors looked for lively articles to enrich instruction and enhance classroom learning. Articles highlighted history, people, philosophy, problem-solving, applications, and more. And there was room for proofs without words, poetry, quotations, cartoons, and other such items.

All CMJ issues, as long as they are more than three years old, are now available on the Web through the JSTOR archive, a database to which many college libraries and other institutions subscribe.

Use of the JSTOR archive has been increasing steadily over the years since CMJ first became available in this form in 2002, and it's now possible to see which of its hundreds of articles have been particularly appealing or useful. Here are the fifteen most frequently viewed articles to date:

I was very pleased to see one of my favorite articles on the list: George Markowsky's debunking of various myths commonly associated with the golden ratio. Like the list of top articles for Mathematics Magazine, the CMJ list also suggests a strong interest in history. Authors Israel Kleiner and Carl B. Boyer have articles on both lists. Boyer's account of the history of calculus, published in the first issue of The Two-Year College Mathematics Journal, is a reprint of an article that originally appeared in 1969 in Historical Topics for the Classroom (Thirty-First Yearbook of the National Council of Teachers of Mathematics).
Posted by Math Tourist at Wednesday, September 12, 2007 No comments: