The famous Austrian candy known as Mozartkugel (Mozart sphere) consists of a marzipan core that is smothered in nougat or praline cream, then coated with dark chocolate. Many companies make Mozartkugeln, but one maker, Mirabell, claims that its product is unique. It's the only Mozartkugel that's a perfect sphere. 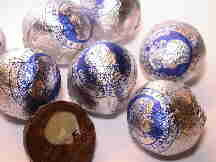 Mozartkugeln made by Fürst. Photo by Clemens Pfeiffer, Vienna, Austria.

Each sphere comes wrapped in a square of aluminum foil. So, to minimize waste, it's natural to ask about the smallest piece of foil that would cover a sphere. It doesn't have to be a square, but it would be helpful if the unfolded shape would tile the plane. In other words, the pieces could then be cut from a large sheet of foil without any waste.

That's the tantalizing question that Erik Demaine, Martin Demaine, John Iacono, and Stefan Langerman recently bit into. They presented their findings earlier this year at the 23rd European Workshop on Computational Geometry, held in Graz, Austria.

Mathematically, the problem involves transforming a flat sheet into a positive-curvature sphere. Normally, folding (as in mathematical origami) preserves distances and curvature. Instead, the wrapping task requires infinitely many, infinitesimally small "folds" (but no stretching) to accomplish the required transformation. So, Demaine and his collaborators define a wrapping as "a continuous contractive mapping of a piece of paper into Euclidean 3-space." Contractive means that every distance either decreases or stays the same, as measured by shortest paths on the piece of paper before and after mapiing via the folding.

The analysis shows that a square with diagonal 2π and area 2π2 covers a unit sphere. No smaller square can serve as a wrapping.

It's interesting to note, Demaine and his colleagues say, that a rectangle of dimensions 2π by π has the same area. It, too, can wrap around a sphere. Indeed, Mirabell wraps its Echte Salzburger Mozartkugel using such a rectangle, expanded a bit to ensure overlap.

An equilateral triangle will also do the job. In this case, the requisite triangle's area is about 0.1 percent less than the 2π2 area of the smallest wrapping square.

Demaine and his colleagues also come up with a three-petal configuration (below) that tiles the plane. In this case, each wrapping unit takes up an area of only about 1.6π2.

"This paper initiates a new research direction in the area of computational confectionery," the researchers conclude. "We leave as open problems the study of wrapping other geometric confectioneries, or further improving our wrappings of the Mozartkugel."

In its various incarnations, Mathematics Magazine, which is published by the Mathematical Association of America (MAA), has been around for more than 75 years. All issues of the Magazine, as long as they are more than three years old, are available on the Web through the JSTOR archive, a database to which many college libraries and other institutions subscribe.

Use of the JSTOR archive has been increasing steadily over the years since the Magazine first became available in this form in 2002, and it's now possible to see which of its hundreds of articles have been particularly appealing or useful. Here are the fifteen most frequently viewed articles to date:
Interestingly, the list includes articles from every decade of Mathematics Magazine's existence, except the 1920s. The topics are widely varied, though there is a distinct bias toward the history of mathematics. And the name Descartes appears in three of the titles! Curiously, the article "Humanizing Mathematics" is simply a four-page list of books (including several devoted to puzzles and recreational mathematics) and articles (selected mainly from the Mathematics Teacher), compiled by R.C. Archibald of Brown University in 1932.

Several of the top articles are also available in the new MAA book The Harmony of the World: 75 Years of Mathematics Magazine, which features 38 selections from the archive.

For anyone who does not have access to the JSTOR archive at a local library, these articles will soon be available individually from JSTOR for a fee (and they can be found in a Google search). MAA members also have the option of obtaining an individual subscription to JSTOR, which provides access to the full archives of not only Mathematics Magazine but also The American Mathematical Monthly and The College Mathematics Journal.

Alexanderson, G.L., ed. 2007. The Harmony of the World: 75 Years of Mathematics Magazine. Mathematical Association of America.
Posted by Math Tourist at Friday, June 08, 2007 No comments:

In Mathematical Snapshots, Hugo Steinhaus described the following method for generating an interesting curve. Wrap a strip of paper around a cylindrical candle. Using a sharp knife, slice the wrapped candle into two pieces, making the cut at an oblique angle. The candle's cross section at the location of the cut is an ellipse. Unwinding each of the resulting paper scraps reveals a sinusoidal edge where the paper was cut.

An elliptical cross section of a cylinder becomes sinusoidal when unwrapped.

A number of years ago, Mamikon A. Mnatsakanian showed that you can get the same result when you dip a cylindrical paint roller at an angle into a container of paint. When you roll the applicator on a flat surface, you also see a sinusoidal wave pattern.

A paint roller can be used to print sinusoidal waves on a flat surface.

Now, Mnatsakanian and Tom M. Apostol have extended Steinhaus's original demonstration further to include a wide variety of cross sections. "Imagine the elliptical cross section replaced by any curve lying on the surface of a right circular cylinder," they write in the May American Mathematical Monthly. "What happens to this curve when the cylinder is unwrapped?"

Apostol and Mnatsakanian also consider the inverse problem. What happens to curves on flat surfaces that are then rolled into cylinders? You can experiment with such transformations yourself simply by drawing curves (lines, circles, parabolas, and so on) on rectangular sheets of transparent plastic, then seeing what happens when these sheets are rolled into cylinders of different radii.

"A few trials reveal an enormous number of possibilities, even for the simple case of a circle," the mathematicians note.

Rolling a circle drawn on a sheet of transparent plastic into cylinders of various radii produces strikingly different geometric patterns. The dashed curves are on the rear half of the cylinder.

Working with just a straight line segment drawn on a transparency produces striking visual evidence of the nature of geodesics on a cylinder. A line segment on a flat sheet is the shortest path between the line's endpoints. Because distances are preserved when a cylinder is unwrapped, such a line segment, when rolled into a cylinder, becomes a geodesic (or the shortest path) on the cylinder. You see, no matter what the cylinder's radius, that such a geodesic on a circular cylinder is always part of a circular helix. Viewed from the side, the pattern looks like a sine wave.

For circular cylinders, Apostol and Mnatsakanian note, a sinusoidal influence is always present.

They go on to investigate the curves that result from drilling holes into cylinders and from unwrapping curves from a right circular cone.

A plane, for example, cuts a cone along a conic section. "We can analyze the shape of the corresponding unwrapped conic," Apostol and Mnatsakanian report. "This leads to a remarkable family of periodic plane curves that apparently have not been previously investigated."