This excerpt from the Civil War journal of Aaron Denton Riker (1830-1914) of the 66th Ohio Volunteer Infantry describes his regiment's role in garrisoning the town of Dumfries, Virginia, during the winter of 1862-63 (edited for spelling, punctuation, and clarity).
At that time, the regiment was part of the Army of the Potomac, commanded by Maj. Gen. Ambrose E. Burnside (replaced by Maj. Gen. Joseph Hooker in January 1863). The regiment (Lieut. Col. Eugene Powell) was in the first brigade (Col. Charles Candy) of the second division (Brig. Gen. John W. Geary) of the twelfth army corps (XII Corps), led by Maj. Gen. Henry W. Slocum.

Passing through Leesburg, we took the road to Fairfax, from thence to Dumfries [Virginia]. It had been the design for us to join [Maj. Gen. Ambrose] Burnside previous to the Battle of Fredericksburg [Dec. 11-15, 1862]. But the terrible muddy state of the roads prevented our reaching there in time, and we did not get further than Dumfries, at which place we arrived on the 16th of December. 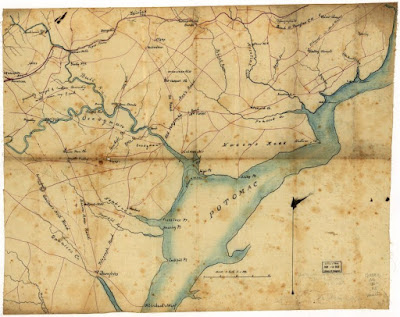 Map dating to the 1860s shows roads between Fairfax Station to the north and Dumfries to the south. Library of Congress.

Our supplies were brought by boat from Alexandria to a point on the Potomac [River] within four miles of our post. From there they had to be wagoned over a miserable road. [It was] almost an impossibility to supply the Command with supplies, owing to the state of the road being almost a mire from the boat landing to the town. 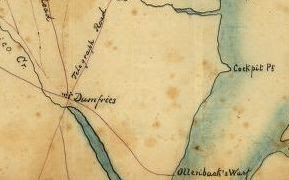 Map showing supply route from a boat landing on the Potomac River to the town of Dumfries. Cockpit Point to the north had been the site of a Confederate battery before it was abandoned in March 1862. Library of Congress.

So far I have omitted giving a description of towns and villages passed through or a description of the country or miles traveled from the fact that, at this time of writing, which is more than 12 months since our arrival at the last-named town, I have had to write from memory, having lost my notebook at this place. From the time of our reaching Dumfries, I will be able to give more minute details of our marches, etc.

Dumfries has at one time been a large and prosperous town and deserves more than a passing notice. It was settled in the year [1651] by emigrants from Scotland, it being the second settlement in Virginia.

The town has been twice burned and now numbers about 20 dilapidated houses. The present rebellion has left its mark here and on the country around, Sewell's [Point] and Cockpit Point being near here. The Rebels occupying those places have destroyed all fencing, together with a number of buildings in and around town.

This was formerly a county seat, the courthouse still standing. The bricks of which it is built were brought from Scotland, and the first bell ever imported to America summoned the people together when Patrick Henry delivered his famous speech against colonial taxation within the walls of the courthouse.

Twas here that [George] Washington spent a portion of his youth. And the house in which [Mason Locke] Weems, the author of the life of Washington, lived is still standing. The glory of Dumfries has departed, and soon it will cease to be a town as none but the poorer classes now reside there, men of capital having gone to more enterprising towns where they have established themselves in business.

While we remained here, our pickets were sometimes annoyed by bushwhackers, and very often supply wagons were captured on the road between here and Alexandria. Yet we were allowed to remain in quietude, with the exception of an occasional false alarm and the frequent intelligence of the capture of supply wagons, which we attributed to citizens. 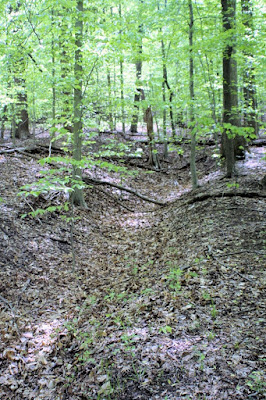 Thus our time passed from the 16th of December to the [26th] of December, when we were startled by the booming of cannon at 12 o'clock while we were at dinner. On going out to learn the cause, we found the Rebels had a battery planted on a hill overlooking the town and were shelling the town.

The troops of our Command were stationed out of town half a mile on the east and north, while the enemy appeared on the west. We had but two pieces of artillery. They were soon placed in position and the fire returned. In the meantime, the infantry came up, and the musketry commenced.

The fight lasted until dark and left us in full possession of the field though the enemy outnumbered us three to one, they [also] having four pieces of artillery. Yet we repulsed them at every point where they attempted to advance. They retreated in the night, and [we] were not molested any more by them. Our loss was three killed, a few wounded, and one picket post captured with a small guard.

We remained at Dumfries until the 20th day of April, when we marched to Aquia Creek and joined our old division again. 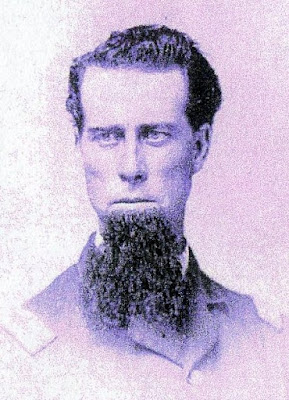 Riker kept a journal recounting his experiences during the Civil War. The journal is now housed at the George J. Mitchell Department of Special Collections and Archives, Bowdoin College Library, Brunswick, Maine. Journal. Transcript.
Posted by Math Tourist at Thursday, August 01, 2019 No comments: