The game of sepak takraw, a popular form of kick volleyball in Southeast Asia, uses a woven ball that, in its simplest form, has 12 pentagonal holes and shows a weaving pattern with 20 intersections. The twelve pentagons remind me of a regular dodecahedron, one of the Platonic solids.

Traditionally made from rattan, such a ball may be constructed from six long strips (instructions), with five strips defining the pentagonal holes and a sixth strip forming a closed loop that wraps around twice (video). 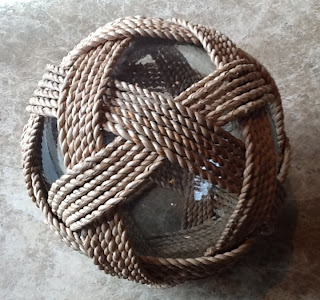 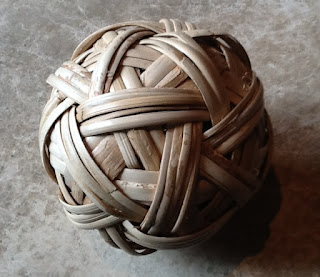 The two examples shown above are part of a display of artistically crafted woven spheres in the lobby lounge of the AT&T Executive Education and Conference Center at the University of Texas at Austin. I couldn't help but be reminded of sepak takraw balls when I first saw the display. 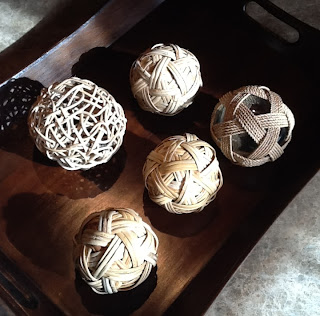 Unfortunately, I couldn't find any information about these intriguing models, and would love to know more about them.

Human activity can leave telltale marks on its surroundings. These marks, in turn, can provide clues about the nature of the activity that created them or about the setting itself. See, for example, "Statistical Wear" and "An Irresistible Edge."

Recently, I started paying attention to wear caused by finger contact in the vicinity of elevator buttons. Shown below is a set of buttons for a hotel elevator. What can you tell about the setting just from the scuff marks?

The wear pattern suggests that this particular set of buttons is most likely located on the lobby floor; many more people have pressed (or tried to press and missed) the "up" button than the "down" button. The curious tail toward the right indicates that people tended to come from the right, presumably making contact with the brass plate prematurely.

Indeed, these buttons are on the lobby floor of a hotel in Toronto, and the only entrance to this bank of elevators is from the right, with no exit to the left.

You'll see similar wear marks in the example below, from a hotel in Austin, though the distribution isn't quite as strikingly asymmetric.

Wear marks appear in all sorts of settings. Foot traffic can be responsible for some of the more striking examples, particularly when the marks appear on stone, as seen in the photo below of a stone staircase in Wells Cathedral in Great Britain. 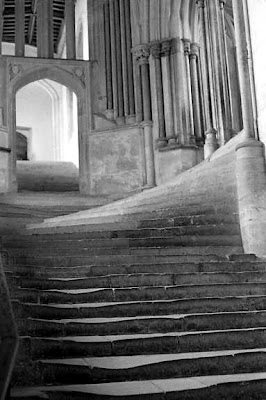 What can you say about the traffic patterns that these worn steps reveal?

Roots of a Base Tiling Like a strangely ordered root system, a fragment of an Archimedean tiling serves as the supporting structure for a metal pillar in an odd artwork in downtown Toronto. The sculpture, which consists of a pair of quirkily incomplete pedestrian bridges, stretches across paving bricks amid the restored, industrial-style buildings of the city's Distillery Historic District.

Titled Passerelle et Portance, the sculpture was created by Claude Millette and installed in 2006.

The tiling that forms the base consists of regular hexagons framed by squares and equilateral triangles. This example of a semiregular tiling is sometimes described as a rhombitrihexagonal tiling. 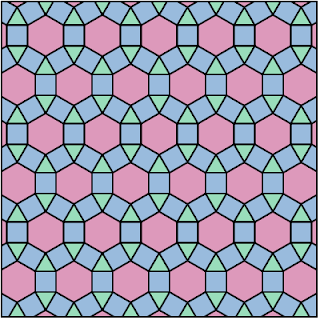 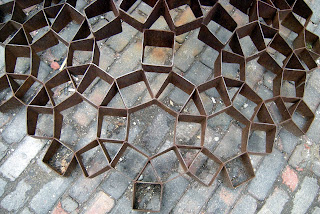 Photos by I. Peterson
Posted by Math Tourist at Sunday, June 23, 2013 No comments: