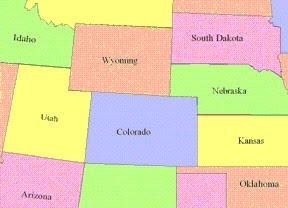 The number pad of a computer keyboard or calculator presents a three-by-three array of the digits from 1 to 9. (We exclude the digit 0, which is usually in a row by itself.) This array of numbers can serve as the basis of a simple, two-player game. 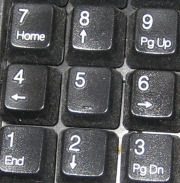 The first player responds to the second player's move in the same way. The two players take turns alternately until a player reaches a sum greater than a specified amount, say 30. That player loses.

Is there a winning strategy for this game? How does it depend on the specified "fatal" total?

"You can visualize the game as being played by stacking wooden blocks on top of one another," Alex Fink and Richard Guy write in the September College Mathematics Journal. "When the height exceeds 30 blocks, the stack topples and the player who was responsible loses."

For a tower of "tolerable" height 30, player A can win by touching 9 on the first move. No matter how B moves, A can always ensure that B exceeds 30. A can also win by starting with 3, but B can prolong the game by touching 1 at each turn.

Fink and Guy also work out the winning moves for any "tallest tolerable tower." For example, as noted above, the winning initial moves for 30 are 3 and 9. Interestingly, there is always a winning first move for the first player unless the tallest tolerable towers are 27, 43, or 64 in height. For 27, 43, or 64, there is no such strategy for the first player.

For shorter towers, you have to pay attention and pick your opening move carefully. However, that changes for heights greater than 107. "For towers taller than 107, you can always win by playing 3, 5, or 7—your opponent can never reply with one of these numbers, and whatever is played, you can reply with either of two of them," Fink and Guy report.

Other variants of the game are possible. Fink and Guy consider configurations that include the 0 key in a separate row and look at how what happens depends on whether the key is in the middle, left, or right column—or even straddles two columns. 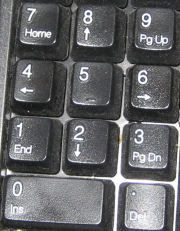 Any of these game variants can be a pleasant pastime. In some cases, the patterns of winning moves are simple enough to master that you could have a distinct advantage over any friends who dare to take on the challenge.

To create a beaded bead, you need a supply of beads, a needle with plenty of thread, and a lot of patience and care. It also helps to consult the innovative designs and patterns of Gwen Fisher and Florence Turnour. The result is an elegant form of beadwork—sparkling, colorful clusters of beads typically woven around one or more large holes. 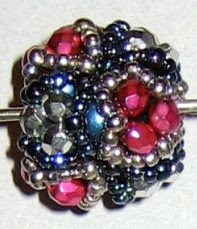 Fisher is a mathematician at California Polytechnic State University in San Luis Obispo, so it's natural for her to look at these creations mathematically. Indeed, many beaded beads can be viewed as polyhedra, where the hole through the middle of each bead corresponds to a polyhedron's edge.

Such polyhedral beaded beads also have particular symmetries, classified by the three-dimensional finite point groups. Earlier this month at MathFest 2007 in San Jose, Calif., Fisher described weaving techniques that allow the realization of beaded beads with all the possible symmetries of polyhedra. 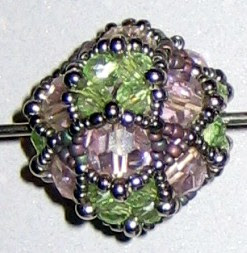 "Any polyhedron can be modeled as a beaded bead," Fisher and Blake Mellor of Loyola Marymount University write in a recent paper published in the Journal of Mathematics and the Arts. In other words, given any polyhedron, it's possible to weave a beaded bead with the same set of symmetries.

"The challenge is to create the patterns to accomplish this so that we are also creating beaded bead that are objects of beauty in their own right," the authors note. "In meeting this challenge, we developed many new designs that may not have been created otherwise." Fisher displayed many of the resulting bead clusters at MathFest.

A symmetry of a geometric object is a rigid transformation, such as a reflection or rotation, that leaves the appearance of the object unchanged. Any rotation or reflection of a sphere leaves the object unchanged, so the symmetry group of a sphere is the infinite collection of these motions, commonly designated O(3). Any given polyhedron shares some finite collection of these symmetries, so its symmetry group is a finite subgroup of O(3).

These infinitely many subgroups divide naturally into 14 classes: the prismatic groups, which correspond to the seven infinite frieze groups (border patterns); and seven additional groups related to the symmetric groups of the Platonic solids.

Fisher notes that beaded beads with any of the prismatic symmetries can be created using a weaving technique, known as the fringe method, that she and Turnour developed. 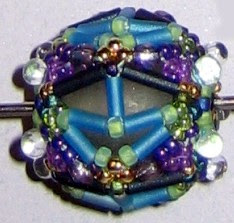 Other techniques allow the realization of such exotic objects as the beaded Sierpinski tetrahedron.

"Bead weaving is a phenomenally rich medium for creating mathematical art in three dimensions," Fisher and Mellor conclude. And the construction of beaded beads leads to additional mathematical questions. For example, what is the minimum number of beads required to realize a given point group? What is the minimal length of thread required?