Way back in the 1960s, one of my favorite TV shows was a satire program called That Was The Week That Was (also known as TW3), which aired weekly on NBC. It was the U.S. version of a late-night British series that was the talk of the country in the early 60s. The U.S. edition featured Elliot Reed, Alan Alda, Phyllis Newman, Henry Morgan, singer Nancy Ames, and, later, David Frost.

One of the program's highlights was its opening song, with lyrics that changed every week to reflect current news events. The show's resident songwriter was Tom Lehrer, who tackled and parodied such subjects as pollution ("Pollution"), Vatican II ("The Vatican Rag"), race relations ("National Brotherhood Week"), education ("New Math"), and nuclear proliferation ("Who's Next?"). A selection of these songs (uncensored) subsequently appeared on a record album titled That Was The Year That Was.

The fact that some of Lehrer's songs have mathematical elements reflects his background. Lehrer earned B.A. and M.A. degrees in mathematics from Harvard University and even entered Harvard's doctoral program, though he never completed his degree. In 1972, he came to the University of California, Santa Cruz, often teaching an introductory course titled "The Nature of Mathematics." He also taught a class in musical theater and would, on occasion, perform songs in his lectures.

In 1974, The American Mathematical Monthly published three Lehrer songs devoted to higher mathematics (mainly calculus). The May issue featured "The Derivative Song," sung to the tune of "There'll Be Some Changes Made," composed in 1922 by Billy Higgins and W. Benton Overstreet. It was originally performed as part of The Physical Revue, a show presented by the Harvard Physics Department in 1951 and 1952.


You take a function of x and you call it y,
Take any x-nought that you care to try,
You make a little change and call it delta x,
The corresponding change in y is what you find nex',
And then you take the quotient and now carefully
Send delta x to zero, and I think you'll see
That what the limit gives us, if our work all checks,
Is what we call dy/dx,
It's just dy/dx.

The June-July issue featured "There's a Delta for Every Epsilon (Calypso)." It was also performed earlier in The Physical Revue.

But one condition I must give:
The epsilon must be positive
A lonely life all the others live,
In no theorem
A delta for them.

How sad, how cruel, how tragic,
How pitiful, and other adjec-
Tives that I might mention.
The matter merits our attention.
If an epsilon is a hero,
Just because it is greater than zero,
It must be might discouragin'
To lie to the left of the origin.

This rank discrimination is not for us,
We must fight for an enlightened calculus,
Where epsilons all, both minus and plus,
Have deltas
To call their own.

"The Professor's Song" appeared in the August-September issue. It is sung to the tune of "If You Give Me Your Attention" from the Gilbert and Sullivan operetta Princess Ida.


If you give me your attention, I will tell you what I am.
I'm a brilliant math'matician — also something of a ham.
I have tried for numerous degrees, in fact I've one of each;
Of course that makes me eminently qualified to teach.
I understand the subject matter thoroughly, it's true,
And I can't see why it isn't all as obvious to you.
Each lecture is a masterpiece, meticulously planned,
Yet everybody tells me that I'm hard to understand,
And I can't think why.

My diagrams are models of true art, you must agree,
And my handwriting is famous for its legibility.
Take a word like "minimum" (to choose a random word), (*)
For anyone to say he cannot read that, is absurd.
The anecdotes I tell get more amusing every year,
Though frankly, what they go to prove is sometimes less than clear,
And all my explanations are quite lucid, I am sure,
Yet everybody tells me that my lectures are obscure,
And I can't think why.

Consider, for example, just the force of gravity:
It's inversely proportional to something — let me see —
It's r3 — no, r2 — no, it's just r, I'll bet —
The sign in front is plus — or is it minus, I forget —
Well, anyway, there is a force, of that there is no doubt.
All these formulas are trivial if you only think them out.
Yet students tell me, "I have memorized the whole year through
Ev-rything you've told us, but the problems I can't do."
And I can't think why!

(*) This was performed at a blackboard and the professor wrote: /VVVVVVVVVVVVVVV.

An earlier version of "The Professor Song," performed in The Physical Revue, has somewhat different lyrics.

Lehrer continued to return to mathematical themes in his songwriting. In 1993, for example, he composed the song "That's Mathematics!" for a special program, sponsored by the Mathematical Sciences Research Institute in Berkeley, to commemorate the proof by Andrew Wiles of Fermat's Last Theorem. At the Fermat Fest, Morris Bobrow performed not only "That's Mathematics!" but also "The Derivative Song" and "There's a Delta for Every Epsilon." And he rounded out the musical part of the program with a Danny Kaye classic, "The Square of the Hypotenuse," written by Saul Chapin and Johnny Mercer for the movie Merry Andrew. The Fermat Fest program is available as a video from MSRI.

Like a surreal piano keyboard, it stretches in a narrow band, high along the walls of the cavernous lobby of the Ernst & Young office building (now 222 Bay Street) in downtown Toronto. Created in 1993 by artist Arlene Stamp, this artwork is based on a visual representation of binary numbers.

Using black squares to represent 0s and white squares to represent 1s, Stamp filled in a strip of graph paper that was 8 squares wide and 256 squares long with the sequence of binary numbers from 00000000 to 11111111. To her amazement, the resulting pattern resembled a fractal, with each section branching into smaller and smaller fingers.

"Suddenly, I could see the inextricable link between pictures of fractals generated by computers and simple binary numbers, which underlie the structure of the computer itself," Stamp said. 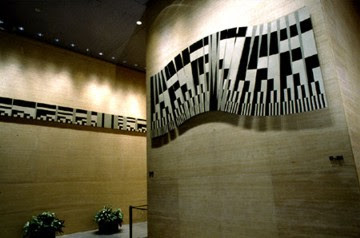 For the Ernst & Young building, Stamp constructed her Binary Frieze out of vinyl floor tiles, which were cut by hand, then assembled and glued onto aluminum supports. To perturb the relentless linearity of the fundamental binary number pattern, she also introduced a wave effect and an element of unpredictability by tilting and overlapping adjacent rectangles in certain sections of the mosaic.

The wave effect results from moving a rectangle through two functions, the first determining the width of overlap between adjacent positions of a rectangle and the second determining the degree of tilt.
"The interesting thing about these interrelated functions is that they never fall into synchronization, so you cannot predict a particular position ahead," Stamp said. "Each new position of the rectangle is dependent on the previous step and the system flips into reverse when it reaches a particular limit, causing an overall wave pattern." 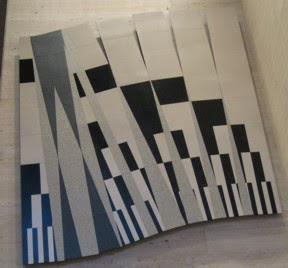 At the time, Stamp said, "I was very interested in the possibilities for non-repeating patterns in public spaces as a way of enlivening large areas, like floors and walls, that are so often covered up with simple repeating motifs." "The expansive walls of the Ernst & Young lobby offered me an unusual opportunity to explore nonperiodic pattern over a large area, visible from a distance—perfect for the material presentation of the unfolding fractal pattern of binary numbers," she added.

A second nonrepeating mosaic design, created by Stamp for the Sheppard West (formerly Downsview) subway station in Toronto the same year, is based on the digits of pi (see "Sliding Pi in Toronto").
Photos by I. Peterson
Posted by Math Tourist at Friday, July 06, 2007 No comments: