The entrance to the Sheppard West (formerly Downsview) subway station in Toronto presents visitors with a stunning vista. A vast mosaic of small square tiles sweeps across a curved wall, inviting travelers to trace its lines and ponder intriguing irregularities in its color scheme of blues, greens, roses, and other hues. 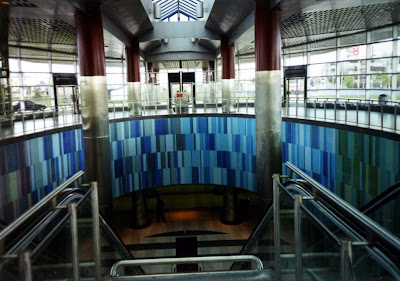 Of the hordes of people who hurry through the station, perhaps only a few take a moment or two to contemplate the curious blend of the regular and the seemingly random in the bands of this cryptic spectrum writ large. Far fewer people even suspect that the artist responsible for this mosaic based her remarkable design on the decimal digits of the number pi (π), the ratio of a circle's circumference to its diameter. 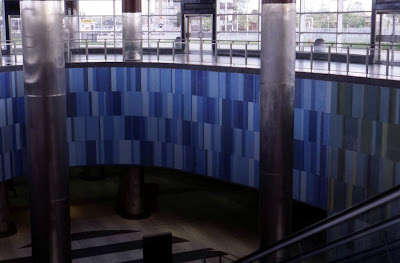 The artist is Arlene Stamp. In 1993, at the height of her interest in non-repeating patterns, she was intrigued by the possibility of using designs with an element of unpredictability to enliven large areas in public spaces, such as floors and walls, which are usually covered with simple, repeating motifs.
To win the commission to decorate the newly built subway station, Stamp had to come up with an interesting design that would work equally well on various surfaces in different parts of a large station yet stay within a tight budget.
"It became clear that any kind of design based on…modules would be very repetitive within such a restrictive budget," Stamp said. "So I came up with a design that was rich in information but inexpensive in…realization." 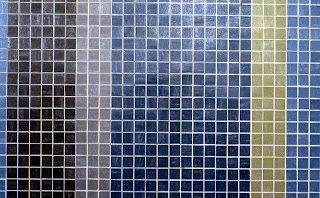 The basic unit in Stamp's design was a rectangle, 10 units wide, made up of square tiles. Instead of placing these rectangles side by side along a baseline to create a regular, linear pattern, she overlapped adjoining rectangles. The amount of overlap was governed by successive decimal digits of pi.

"I used pi as a source for a string of unpredictable digits because the circle and curved walls were a design feature of this station," Stamp remarked.

The amount of overlap between adjacent rectangles is governed by the decimal digits of pi. For example, the first digit of pi after the decimal is 1, so the first two rectangles from the left (black and red) overlap by one unit, just as if the second rectangle were sliding over to the left to rest partly on top of the first. The second digit is 4, so the third rectangle (green) overlaps those already in place by four units.
Stamp used four sets of eight colors for the project, deploying them in different ways on surfaces in various parts of the station. Each set of colors had a different cast: yellowish green, bluish green, reddish blue, and bluish red.

"I assigned colors by thinking of the first layer as the lightest, with the colors deepening according to the number of layers of overlap," she said. 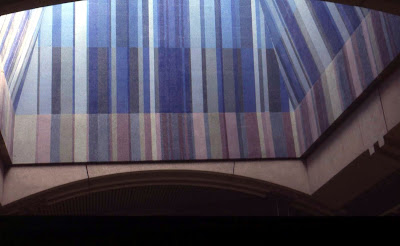 Describing a non-repeating design spread over a very large area presented an additional difficulty. "One of the big challenges of this commission was to find a way of encoding the color information for the tile installer in some kind of space-efficient way," Stamp noted. "With the help of an architect and a number-coded color system, we got all the information on a single sheet of the architect's plans."

Stamp's design doesn't repeat itself anywhere in the station. Indeed, it's fun to look for all the different "pieces of pi" scattered throughout the structure.

"It's true that few visitors to the station would have any idea that there is a connection between the patterns there and a math concept," Stamp said. "But surely some must wonder how such a seemingly random, ever-changing pattern of color happened—because it is such a rarity in public design." 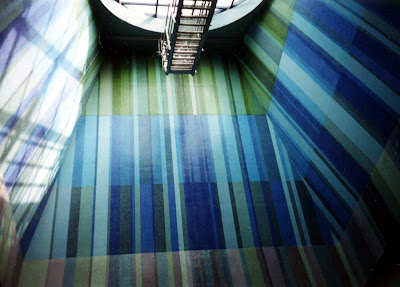 Moreover, upon glimpsing the various manifestations of Stamp's pi-based mosaic, a few may even sense an underlying plan of some sort—that there is method to the randomness.

For another example of Stamp’s fascination with numbers and patterns, see "Binary Frieze."

Photos by I. Peterson
Posted by Math Tourist at Tuesday, June 08, 2010

you make my mornings more enjoyable with your posts