The Enigma cipher machine figures prominently among the displays at the National Cryptologic Museum, located next to the headquarters of the National Security Agency in Ft. George G. Meade, Md. German military forces used the machine during World War II to encrypt tens of thousands of messages.

In principle, the Enigma's combination of wired rotors and plugs, which changed each letter into a new one as a user typed a message, made the machine highly secure. German officials believed that no enemy could break the coded messages without capturing a keylist, which told the cipher machine operator what rotor and plug settings to use each day.

Nonetheless, the system had vulnerabilities, and mathematicians played a key role in exploiting those flaws and developing methods for breaking Enigma-enciphered messages. Chris Christensen of Northern Kentucky University has recounted the story of three Polish mathematicians who played a crucial role in that effort. His account, titled "Polish Mathematicians Finding Patterns in Enigma Messages," appeared last year in Mathematics Magazine.

An illuminating visit to Bletchley Park in England, where the bulk of the codebreaking took place during World War II, recently inspired Danish high school teacher and mathematician Erik Vestergaard to create a Web page devoted to the Enigma. The page includes photos, personal notes, and links to a variety of resources on the topic, including a copy of Christensen's article.

The gradual unveiling in recent decades of the importance of the Bletchley codebreaking effort has also provided the background for a number of fictional accounts. My favorite is the suspenseful novel Enigma by Robert Harris, in which the hero is a mathematician recruited to work at Bletchley Park. The novel later became an entertaining movie directed by Michael Apted. I was less impressed by the Enigma references in Neal Stephenson's sprawling Cryptonomicon.

For a mathematics teacher, the entire episode provides a dramatic real-world example of mathematical theory at work.
Posted by Math Tourist at Friday, May 30, 2008 No comments:

The Most Marvelous Theorem

"What makes a theorem great?"

To Dan Kalman of American University, a great theorem is one that surprises. "It is simple to understand, answers a natural question, and involves familiar mathematical concepts," he writes in the April Math Horizons.

Kalman's nominee for the "Most Marvelous Theorem in Mathematics" concerns a remarkable relationship between the roots of a polynomial and the roots of its derivative. Kalman calls it Marden's theorem because he first encountered it in the 1966 book Geometry of Polynomials by Morris Marden (1905–1991). Marden himself traced the theorem to an 1864 paper by Jörg Siebeck.

Suppose you have a third-degree polynomial—a cubic function. Marden's theorem specifies exactly where to find the roots of the derivative of this polynomial.

A cubic has three roots in the complex plane. Typically, these roots form the vertices of a triangle. Draw an ellipse inside the triangle so that the ellipse touches the triangle's sides at their midpoints. The two foci of the inscribed ellipse are the roots of the polynomial's derivative. 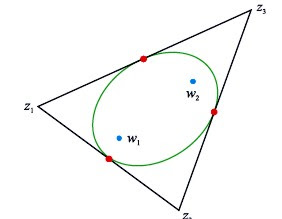 In a publishing tour de force, Kalman's technical article describing an elementary proof of Marden's theorem appears in the April American Mathematical Monthly and his interactive, online presentation of the theorem is simultaneously available in the MAA's Journal of Online Mathematics and Its Applications.

What's your candidate for the most marvelous theorem in mathematics?
Posted by Math Tourist at Friday, May 09, 2008 3 comments: