A complicated, twisty form stands guard at the entrance to the National Air and Space Museum on the National Mall in Washington, D.C. Created by architect and sculptor Charles O. Perry and installed in 1976, the sculpture is called Continuum. 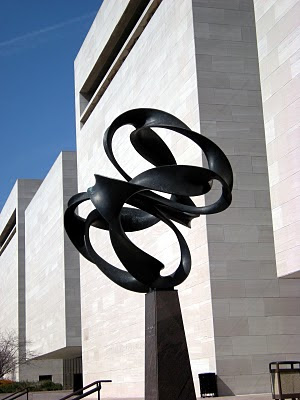 Perry describes his artwork as a Möbius surface of seven saddles, designed to represent the continuum of the universe. In effect, despite its confounding twistiness, the sculpture has just one continuous surface and one edge—just like a Möbius strip. 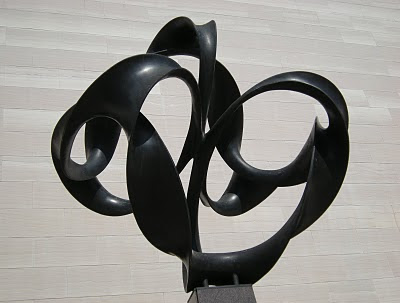 "In this case, the edge of the sculpture portrays the path of a star as it flows through the center of the sculpture's 'black hole' into negative space-time and on again into positive space," Perry explains.
Like many of his sculptures, Continuum reflects Perry's desire to explore the paradoxes and enigmas posed by scientific discovery and to express the solemn beauty of scientific ideas and the attendant quest for knowledge.
"The difference between the artist and the scientist is that the scientist uses intuition to look toward finding the facts, while the artist uses intuition to intrigue others," Perry contends. "Thus, I remain here on the edge of science, encouraged to make these sculptures that attempt to speak of the orders of our universe." 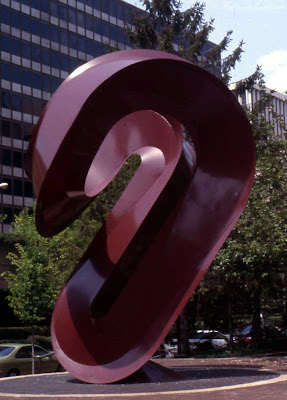 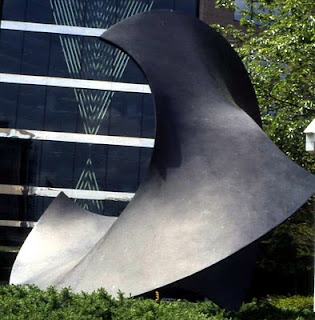 Helix Möbius Mace by Charles O. Perry, Crystal City, Virginia.
The amazingly different ways in which artists can present a Möbius surface are reminders that a topological form retains its essential character—in this case, its one-sidedness—no matter how much the figure is deformed, just as long as it isn't punctured or torn. Such infinite flexibility offers a vast playground for creative reconfiguration of an intriguing shape.
"The breadth of expression possible with mathematics as a discipline is almost endless," Perry insists. 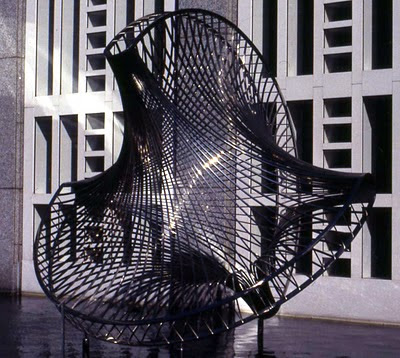 Early Mace by Charles O. Perry, Peachtree Center, Atlanta, Georgia.
The basis for this twelve-foot stainless-steel sculpture is the form created when the arcs on the face of a sphere are inverted, along the lines of the stitching on a baseball.
Perry's monumental sculptures can be found in many locations around the world. If you happen to encounter one, take a close look and try to decipher its geometric message. 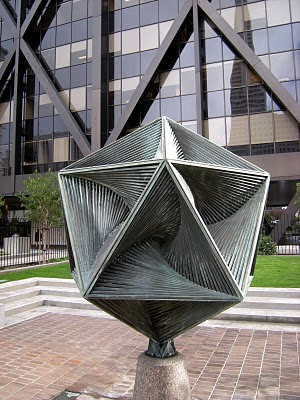 Icosaspirale by Charles O. Perry, in front of One Maritime Place (Alcoa Building),
San Francisco.
"Just as it sets my brain off to hear Bach, so the exquisite natural laws of form strike a chord in me," Perry says. "My pieces are ordered unto themselves, as if space had a set of rules similar to the counterpoint of music."
"At times, the works will have a single generating order which will grow to completion and stop, while others will have overlays of mutating effects," he continues. "Most, however, are given intertwining themes which are meant to be played upon by sunlight. Many have some form of transparency to them. All have a sequential movement." Eclipse by Charles O. Perry, Hyatt Regency Hotel, Embarcadero Center, San Francisco.
References:
Peterson, I. 2001. Fragments of Infinity: A Kaleidoscope of Math and Art. Wiley.
Photos by I. Peterson
Posted by Math Tourist at Thursday, May 27, 2010

Nice post! I love the art of Charles O. Perry. I've just written an article about his D2d scultpure that you might like to see.
http://topologia.wordpress.com/2013/01/27/superficies-topologicas-en-el-arte/

I am writing to request permission by seven pictures that you have about the Charles Perry’s artwork. The material to which, I believe, you hold the copyright is in the following link:

These materials will be used by our investigation group, in a short audiovisual production that we are making about the Charles O. Perry artwork, during the month of May, 2020.

pd: I would like to have your email address to send you a letter in a formal way.

You have my permission to use the images in your presentation.I can be reached at mathtourist@gmail.com.