Stony Brook University has a new landmark—a gracefully contoured, intricately patterned ring that rises 24 feet above its granite base. Installed and dedicated in October, this bronze sculpture is a visual testament to the beauty of mathematics.

Created by noted sculptor and mathematician Helaman Ferguson, the sculpture was constructed from 144 bronze plates, each one unique and formed in a sandstone mold carved to order by a computer-controlled robot at Ferguson's Baltimore warehouse studio. Baltimore Sun article. 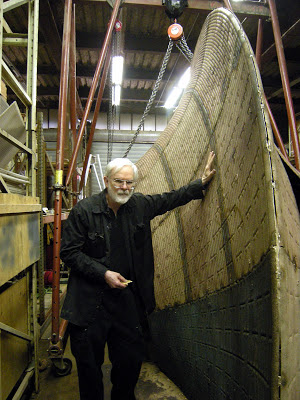 Helaman Ferguson stands with a completed portion of his Umbilic Torus SC sculpture in his Baltimore warehouse studio.

Titled Umbilic Torus SC, this sculpture is a giant version of one of Ferguson’s signature pieces, Umbilic Torus NC, created in 1988. 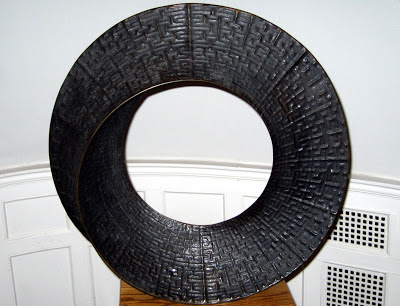 One rendition of Umbilic Torus NC, 27 inches tall, stands in the lobby of MAA headquarters in Washington, D.C.

The basic underlying form is a torus, but with a roughly triangular rather than a circular cross section. 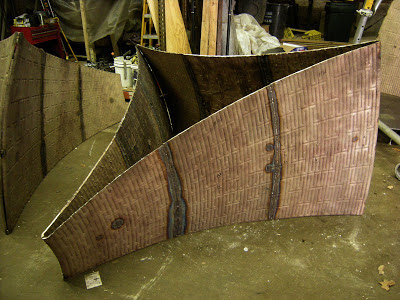 This assemblage of bronze plates shows the curved triangular cross section of the sculpture.

The triangular cross section has three inwardly curving sides, which correspond to a curve called a hypocycloid. In this case, the curve is the path followed by a point on the circumference of a small circle that, in turn, is rolling inside a circle three times as wide. The result is a curve with three cusps, known as a deltoid. 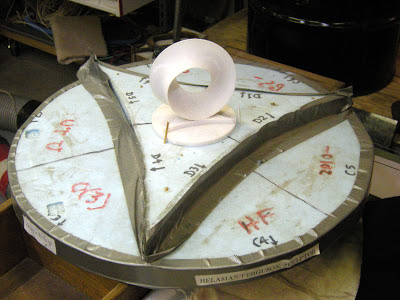 As shown in this model, the Stonybrook sculpture's granite base shows this curve.

Imagine sweeping this curved triangle through space while rotating it by 120 degrees before the ends meet to form a loop. The result is one continuous surface, and the three cusps, as seen in the cross section, lie on the same curve. In other words, a finger tracing the cusp-defined rim travels three times around the ring before ending up back at its starting point. The term “umbilic” in this context refers to the particular way in which the torus is twisted to give this property.

The sculpture’s surface is covered by an approximation of a surface-filling curve know as the Peano-Hilbert curve. After a few steps, the pattern looks like an intricate but highly regular maze. 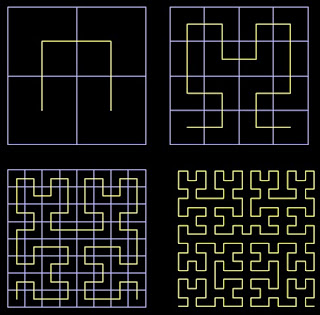 After four stages (iterations), the Peano-Hilbert curve begins to look like a maze. 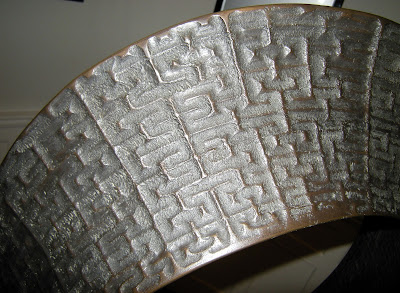 Commissioned by Jim Simons and the Simons Foundation, Umbilic Torus SC took nearly two years to complete. The project involved not only Ferguson but also a team of engineers, welders, programmers, and others, who had to cope with one challenge after another. Even the problem of moving the massive sculpture from Baltimore to Stony Brook caused much head scratching and required considerable ingenuity to solve.

The official dedication (video) of the sculpture took place on October 25, 2012.

Photos by I. Peterson
Posted by Math Tourist at Saturday, December 15, 2012 No comments: Links to this post 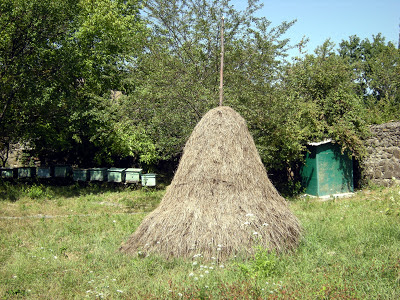 This gracefully contoured haystack at the Ikalto Monastery in the country of Georgia has a symmetric shape that resembles the characteristic "bell" curve of a normal distribution—with a readily visible y-axis poking through the top.

Photo by I. Peterson
Posted by Math Tourist at Monday, December 03, 2012 No comments: Links to this post