Boston skyline as seen from Cambridge, Mass., across the Charles River. The tallest building in the photo is the Prudential Tower at 800 Boylston Street. The skyscraper to its left is 111 Huntington Avenue, sometimes called the "R2-D2" building.
Boston will host the Joint Mathematics Meetings (JMM) on January 4-7, 2012, bringing more than 5,000 mathematicians to the city.
One of the more notable mathematical sights that may greet visitors is the venerable "Mathematica: A World of Numbers . . . and Beyond" exhibit at the Boston Museum of Science (see "Endless Train Track"). Commissioned by IBM and designed by Charles and Ray Eames more than 50 years ago, the displays include a segmented arrow that travels (like a little train) along a track bisecting a Möbius strip to demonstrate the strip's one-sidedness. 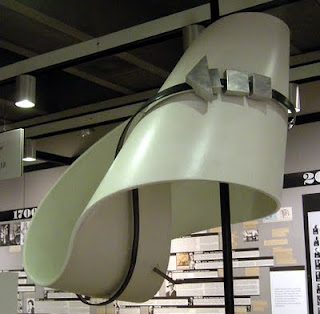 A visit to a statue of Benjamin Franklin (1706-1790) also has a place on a mathematical itinerary. Franklin was born in Boston and spent his early years there. The mathematical connection involves Franklin's pastime of inventing magic squares, as described in the book Benjamin Franklin's Numbers: An Unsung Mathematical Odyssey by Paul C. Pasles.
"In my younger days, having once some leisure which I still think I might have employed more usefully, I had amused myself in making . . . magic squares," Franklin wrote in a letter more than 200 years ago.
"I could fill the cells of any magic square, of reasonable size, with a series of numbers as fast as I could write them disposed in such a manner, as that the sums of every row, horizontal, perpendicular, or diagonal, should be equal," he continued, "but not being satisfied with these, which I looked on as common and easy things, I had imposed on myself more difficult tasks, and succeeded in making other magic squares, with a variety of properties, and much more curious."
You can find an eight-foot bronze statue of Franklin in front of the Old City Hall, where it has stood since 1856. It was Boston's first public statue of a person. The statue overlooks the former site of the Boston Latin School, which Franklin attended, though he never graduated.
The Boston Art Commission offers a walking-tour brochure highlighting 100 examples of notable public art scattered throughout the city.
The Ayer Mansion at 395 Commonwealth Avenue, for example, features a wonderful array of colorful mosaics and stained-glass windows designed by Louis Comfort Tiffany, who often drew inspiration from Moorish and Islamic art.
Conceptual artist Sol LeWitt is represented by a colorful, geometric wall drawing (#1128) visible from the street at 100 Cambridge. On top of that, the Massachusetts Museum of Contemporary Art is hosting an extensive retrospective exhibition of LeWitt’s wall drawings.

Two minimalist artworks with a strong geometric presence that may be of interest are Trimbloid X by David Kibbey, on the Charles River Esplanade between Dartmouth Street and Clarendon Street, and Sudden Presence by Beverly Pepper, at New Chardon Street and Congress Street.

Across the Charles River, Cambridge has its own array of public art, and the city's Arts Council offers a series of activities guides for exploring these varied artworks.

At Harvard University, of particular interest is Topological III by Robert R. Wilson, which stands near an entrance to the Science Center. Wilson was not only a physicist and the founding director of Fermilab but also an accomplished sculptor. 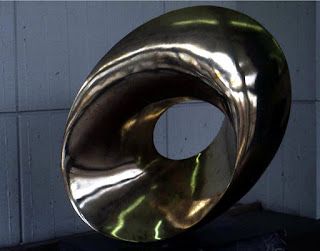 Topological III by Robert R. Wilson.
Wilson's gleaming bronze sculpture is a three-dimensional analog of a Möbius strip. Its cross section is an equilateral triangle, and this triangle rotates through 120 degrees before the ends meet to form a complete loop. Instead of three surfaces, the final product has one continuous surface that runs three times around the loop.

The collection of intriguing public art and the array of striking instances of architectural design at the Massachusetts Institute of Technology deserves its own article. In the meantime, MIT provides a handy guide to its public art collection. 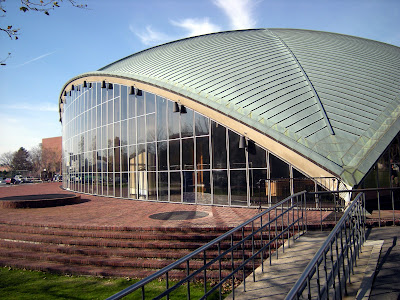 Designed by Eero Saarinen, MIT's Kresge Auditorium has a horizontal cross section that resembles an equilateral triangle with curved sides, close to the geometry of a Reuleaux triangle.

Photos by I. Peterson
Posted by Math Tourist at Tuesday, December 06, 2011 No comments: Links to this post

Some years ago, David Wells surveyed readers of the Mathematical Intelligencer about what they consider to be beautiful in mathematics. The respondents ranked Euler's identity linking e, π, and i as the most beautiful expression in mathematics. See "Euler's Beauties."

In the intriguing new book Beautiful Mathematics (MAA, 2011), Martin Erickson expands on this theme, contemplating the esthetic appeal and elegance of selected mathematical words, geometric structures, formulas, theorems, proofs, solutions, and unsolved problems.
"My approach to mathematics is as an art form, like painting, sculpture, or music," Erickson writes. "While the artist works in a tangible medium, the mathematician works in a medium with numbers, shapes, and abstract patterns."
Erickson's many examples include not only familiar beauties but also underappreciated wonders. His chapter on the fascinating names of mathematical objects, for example, ranges from the figure-eight curve known as the lemniscate to the waterfall of primes, which depicts the way that prime numbers fall into two classes (primes of the form 4n + 1 and primes of the form 4n + 3).
Among these "imaginative" terms, Erickson considers centillion, golden ratio, Borromean rings, sieve of Eratosthenes, transversal of primes, triangular numbers, determinant, and complex plane.
In the language of mathematics, what terms do you find particularly evocative, peculiar, or apt?
My nominee of the moment is the term "block monoid," to which I was recently introduced by Scott Chapman, Editor-Elect of the American Mathematical Monthly. Chapman and Paul Baginski have an article titled "Factorizations of Algebraic Integers, Block Monoids, and Additive Number Theory" in the December 2011 Monthly.
References:
Wells, D.1990. Are these the most beautiful? Mathematical Intelligencer 12(September): 37-41.
______.  1988. Which is the most beautiful? Mathematical Intelligencer 10(December): 30-31.
Posted by Math Tourist at Monday, December 05, 2011 2 comments: Links to this post