Philippe de Vitry (1291-1361) was one of the most prominent figures in medieval music. He was the author of an important music theory text, Ars Nova, which introduced new rhythmic schemes and musical notation. He had a deep knowledge of philosophy, rhetoric, and mathematics.
In many ways, de Vitry's interests and accomplishments reflected the Pythagorean view that music is a subdivision of arithmetic, as shown, for example, in the simple mathematical relations between pitch and length of a string (see Circles of Dissonance). His work honored the dictum of the Roman philosopher Boethius (480-524) that "music is number made audible."
One of de Vitry's observations concerned numbers that can be written as a power of 2 multiplied by a power of 3. In modern terms, such numbers would be expressed as 2n x 3m, where n and m are integers. He called them harmonic numbers.
Here's a table of all harmonic numbers less than 1000. 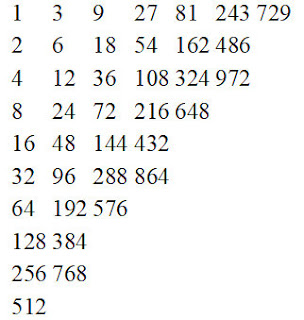