In 2001, artist Susan Happersett came up with a novel twist on the venerable Möbius strip: a playful, eye-catching creation she described as a Möbius accordion. 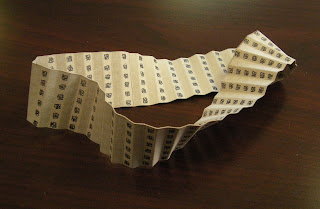 The Happersett Accordion by Susan Happersett.
A Möbius strip, or band, is the remarkable one-sided surface that results from joining together the two ends of a long strip of paper after twisting one end 180 degrees. Mathematicians, magicians, artists, and many others have been playing with this intriguing object since its discovery in the 19th century by August Ferdinand Möbius (1790-1868), a professor at the University of Leipzig in Germany. 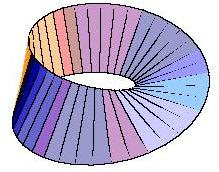 Happersett combines her interest in mathematics with a passion for visual art. In the 1980s, as an undergraduate working toward a degree in mathematics at Drew University, she found herself particularly intrigued by courses on symbolic logic and infinity. She also enjoyed an art course that involved going to New York City to visit galleries, museums, and artist's studios.
"I had always felt there were aspects of mathematics that possessed natural grace and beauty," Happersett said. "I could not understand when people told me they disliked mathematics. I became determined to find a visual way to express the intrinsic aesthetics of mathematics."
To learn the practical side of creating art, Happersett next went to Montclair State University. While earning a graduate degree in fine arts, she spent a lot of time working with grids, exploring different ways of dividing up surface areas, then plotting various functions, sequences, and series. "These graphs allowed me to study the aesthetic characteristics of functions, sequences, and series in a purely visual language," Happersett said.
Happersett followed up her art education with more mathematics, taking courses in logic at Hunter College, where she earned a master's degree in mathematics in 1993. She worked as a high school mathematics teacher until 1995.
While attending Hunter, Happersett started playing with the idea of creating her own visual language based on markings drawn in the boxes of a surface-spanning grid. "In this mathematical language, it is the number of strokes per grid space that holds significance," she says. "The placement of the strokes is random."
For several of her artworks, Happersett used the Fibonacci sequence of whole numbers to determine the number of strokes per box. In the Fibonacci sequence, each new term is the sum of the previous two terms: 1, 1, 2, 3, 5, 8, 13, 21, 34, 55, 89, and so on.
Fibonacci numbers come up surprisingly often in nature. Many flowers, for example, have three, five, or eight petals. Pineapples and pine cones have rows of diamond-shaped scales, which spiral around both clockwise and counterclockwise. If you count the number of spirals, you are likely to find 8, 13, or 21.
Happersett's set of beautifully printed, accordion-folded artbooks, Box of Growth, features grid spaces that are filled in with a specific number of strokes per row, where the number is determined by the Fibonacci sequence.
"Creating these patterns has become a type of meditation," Happersett noted. "Quite often I will make a series of drawings that are based on the evolution of a particular growth pattern. These completed drawings then work together as a book or a wall installation."
In 2000, Happersett created several artworks that were displayed at a New York City artbooks show called "Fireworks." In one, she filled in the grid of squares on a strip of stiff paper, 22 inches long and 2.5 inches wide, with 13 strokes per box, using blue ink on one side and red on the other. She then creased the strip into accordion folds and glued the ends together to form a Möbius strip. Happersett named the result Thirteen Original Colonies.

Thirteen Original Colonies by Susan Happersett.
Happersett's Möbius accordion features black and white markings on a brown strip, with 13 markings, or strokes, per box. "I chose 13 because of the superstition regarding that number and the mysterious illusion created by the two faces—black and white—of the accordion," Happersett said. "Also, 13 is a Fibonacci number, so I could not resist."

The Happersett Accordion by Susan Happersett.
Intricately printed copies of The Happersett Accordion are available from Purgatory Pie Press in New York City. Each unfolded copy comes with a droll certificate of authenticity, along with assembly instructions and the mandatory warning that the product is a mind-boggling "Möbius device."
Happersett's approach to mathematical art focuses on algorithms. She makes the rules, then sees what happens. "By creating algorithmically generated drawings, I hope to reveal the grace and balance that I see in mathematics," Happersett said.

See also "Möbius and His Band" and "Nature's Numbers."
Posted by Math Tourist at Monday, October 19, 2020