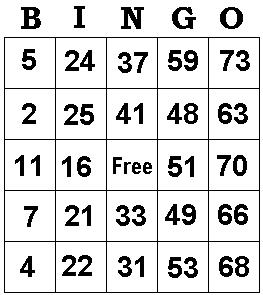 An announcer randomly selects numbers from 1 to 75, calling out each one while players mark the appropriate grid square if that number appears on their cards. In standard Bingo, the player's goal is to be the first to mark an entire row, column, or diagonal. There are 12 winning configurations. Eight of these configurations do not involve the use of the center "free" space, and four (column N, row 3, and the diagonals) do.
What makes the game suspenseful is the tantalizing uncertainty about when someone will achieve a Bingo. It's natural to wonder how long a typical game would last. More precisely, what is the average number of calls required to complete a game for a given number of players?
"The analysis turns out to be straightforward, but obtaining the numerical results would be tedious without a computer," David B. Agard and Michael W. Shackleford noted in their 2002 article on bingo probabilities in the College Mathematics Journal.
In presenting their data, Agard and Shackleford also remarked that some care must be taken in doing the analysis. Several previous efforts had failed to take into account the fact that "the events representing completion of the 12 possible Bingos are neither independent nor mutually exclusive," they pointed out.
One crucial tabulation involves determining the number of subsets of the 12 possible Bingos of a particular size that cover a particular number of squares. For example, four covered squares can produce one Bingo in four different ways, and five covered squares can produce one Bingo in eight different ways.
Overall, there is approximately a 50 percent chance that one card will require at most 41 calls to complete a Bingo, and approximately a 90 percent chance to complete a Bingo in at most 54 calls, the researchers concluded.

However, a typical game involves many more than one card. Because the assumption of independence does not hold for different Bingo cards, the analysis is much more complicated. Agard and Shackleford turned to computer simulation to find the probability distribution for the number of calls to achieve the first Bingo in a game played with m randomly generated cards.

"For a game involving 100 cards, there is virtually no chance it will take more than thirty numbers to produce a Bingo," the researchers reported. "For even a small game of ten cards it is a near certainty to have produced a Bingo by the fiftieth number called."
These odds apply only to the standard version of Bingo. Other variants also occur—X-out, four corners, postage stamp, blackout—and have their own probability distributions. Shackleford also worked out the cumulative probability distributions for the number of calls to complete these types of Bingos. See also "Durango Bill's Bingo Probabilities."
Indeed, with Bingo a common pastime in gambling casinos and elsewhere, it can be a serious business.
Originally posted August 26, 2002
Posted by Math Tourist at Sunday, October 11, 2020