A Measure of Beauty

Mathematician George David Birkhoff (1884–1944) is best known for his work on differential equations and dynamics. His ergodic theorem gave the kinetic theory of gases a rigorous basis. He solved important problems in celestial mechanics and made contributions to the mathematical foundations of relativity theory and quantum mechanics.
Birkhoff also had a keen interest in aesthetics—the qualities that make a painting, sculpture, musical composition, or poem pleasing to the eye, ear, or mind. He sought a formula—a mathematical measure—that would capture an object's beauty.
Birkhoff's interest in aesthetics began early. As an undergraduate at Harvard, he was intrigued by the structure of western music and pondered the riddle of what makes something melodious.
In the early 1930s, Birkhoff spent a year traveling around the world studying art, music, and poetry in various countries. He came up with a formula that encapsulated his insights into aesthetic value and described his theory in a 1933 book, Aesthetic Measure, published by Harvard University Press.
At the core of his theory was a formula: M = O/C, where M is aesthetic measure or value, O is aesthetic order, and C is complexity. In other words, Birkhoff put a high aesthetic value on orderliness and a low one on complexity. In his view, beauty increases as complexity decreases.
Here's how Birkhoff's formula for aesthetic measure could be applied to isolated polygonal figures. In this case, in the formula M = O/C, O = V + E + R + HV – F, where V is vertical symmetry, E is equilibrium, R is rotational symmetry, HV is the relation of the polygon to a horizontal-vertical network, and F is a general negative factor (unsatisfactory form). C is the number of distinct straight lines containing at least one side of the polygon.

Applied to polygons, Birkhoff's formula for aesthetic value gives a square the highest rating. A five-pointed star (not shown) similar to the one that appears on the flag of the United States has a rating of 0.90.
Birkhoff's formula and its potential applications—to such creations as vases, architectural designs, melodies, and even poetry—were intriguing enough to be the subject of the article "Mathematical Measure for Art" by Marjorie Van der Water in the March 17, 1934, issue of Science News Letter (now known as Science News). Indeed, the same article was also distributed to newspapers for use in their illustrated Sunday magazines.
The article described the application of Birkhoff's measure of aesthetic value not just to polygons but also to paintings.
It quoted Birkhoff: "The 'complexity' of paintings is usually so considerable that they are analogous to ornamental patterns whose constituent ornaments must be appreciated one by one. However, it is decidedly interesting to remark in this connection how a fine composition is always arranged so as to be easily comprehensible."
In any work of art, Birkhoff claimed, imaginary lines can be drawn across from point to point, following the principal lines of the composition. These lines define geometric areas that generally have a comprehensible form. Similarly, light and dark areas have a certain order or pattern. 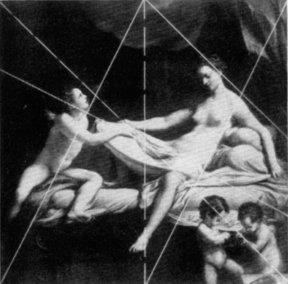 Birkhoff used white lines, following the composition's principal lines, to show how Antonio da Correggio's 1531 painting Danaë consists of comprehensible geometric forms.
"There should be a natural primary center of interest in the painting and also suitable secondary centers," Birkhoff explained. "Such a primary center of interest is often taken in the central vertical line of the painting or at least near to it. The elements of order are of course taken to be the same as in the three-dimensional object represented. Finally there are the connotative elements which play a decisive part; a good painting requires a suitable subject just as much as a poem requires a poetical idea."
Much of the Science News Letter article is about poetry. In Birkhoff's formula for poetry, O = aa + 2r + 2m – 2ae – 2ce, where aa stands for alliteration and assonance, r for rhyme, n for musical sounds, ae for alliterative excess, and ce for excess of consonant sounds.
Here's the beginning of a poem by Alfred, Lord Tennyson (1809–1892) that ranks near the top on Birkhoff's aesthetic scale (0.77):
Come into the garden, Maud,
For the black bat, Night, has flown,
Come into the garden, Maud,
I am here at the gate alone;
And the woodbine spices are wafted abroad,
And the musk of the roses blown.
Birkhoff himself attempted to apply the principles embedded in his formula to the composition of a poem. This is what he came up with:
Wind and wind the wisps of fire,
Bits of knowledge, heart's desire;
Soon within the central ball
Fiery vision will enthrall.
Wind too long or strip the sphere,
See the vision disappear!
This short poem earns an aesthetic rating of 0.62.

Birkhoff suggested that his formula has practical value. "The architect need no longer depend upon using forms and designs that have proved their artistic acceptability through generations of aesthetic judgments," Marjorie Van de Water wrote in Science News Letter. "He can test his creations against an objective formula as well as against his own 'feeling.' The designer, the potter, the commercial creator of anything dependent upon its aesthetic qualities for its success can likewise find assistance in this research."
A glimpse of the quixotic nature of Birkhoff's quest to quantify beauty, however, was revealed in his "practical" advice on what shape a movie screen should have. In the days of silent movies, the proportion of the length to the height of the screen was 4 to 3. When sound films were introduced, a portion of the width of the film was used for the soundtrack, leaving a narrower picture that was almost square.
Even though the square is the most ideal of all polygons, Birkhoff said, that doesn't necessarily mean that the square is the best shape for a movie screen.
"Any obvious numerical ratio of dimensions such as 1 to 1 or 2 to 1 is to be avoided in a picture frame, because it is often desirable that the rectangle be a purely neutral accessory, not producing irrelevant associations," Birkhoff said.
The 2 to 1 proportion has the additional disadvantage that it isn't well adapted to fill the circular field of effective vision. And a rectangle that is nearly a square is disagreeable because of the resulting ambiguity.
So, what dimensions should a movie screen have? Birkhoff didn't come to a definitive conclusion.
Birkhoff himself conceded that an intuitive appreciation is better than any attempt to analyze the source of one's delight in a beautiful object. Nevertheless, he argued, that pleasure is due to an unconscious appreciation of the mathematical proportions of the object.
Originally posted May 24, 2004
Posted by Math Tourist at Thursday, October 08, 2020