Ramsey theory owes it name to Frank Plumpton Ramsey, an English mathematician, philosopher, and economist. His father, Arthur Stanley Ramsey, was a professor of mathematics and the president of Magdalene College at the University of Cambridge. 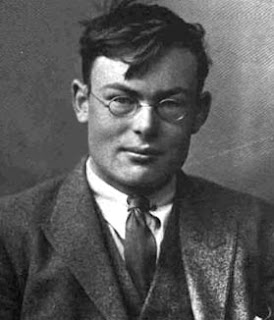 Frank Ramsey (1903-1930). MAA Convergence Portrait Gallery.
Frank Ramsey was born in 1903 and spent nearly his entire life in Cambridge. After he graduated in 1925 as Cambridge University's top math scholar, he remained at the university, quickly developing a reputation as an enthusiastic lecturer who could present ideas with great clarity. Applying his keen intellect, he made significant, wide-ranging contributions to the study of theoretical economics and other fields.
One of Ramsey's contemporaries, philosopher George E. Moore (1873-1958), wrote that Ramsey "combined very exceptional brilliance with very great soundness of judgment in philosophy. He was an extraordinarily clear thinker: no one could avoid more easily than he the sort of confusions of thought to which even the best philosophers are liable, and he was capable of apprehending clearly, and observing consistently, the subtlest distinction."
Ramsey was fascinated by questions of logic. He had been deeply influenced by Bertrand Russell (1872-1970), a philosopher and mathematician who believed that mathematics is synonymo.us with logic. Russell's ambitious goal was to prove that "all pure mathematics deals exclusively with concepts definable in terms of a very small number of fundamental logical concepts, and that all propositions are deducible from a very small number of fundamental logical principles."
These words appear in Russell's book The Principles of Mathematics (Principia Mathematica), in which he set forth his landmark thesis.
Russell was keenly interested in how we come to know what we know—how we draw valid conclusions from evidence. For him, such questions required close study of logic puzzles and paradoxes to help expose potential cracks in structures of belief.
"A logical theory may be tested by its capacity for dealing with puzzles, and it is a wholesome plan, in thinking about logic, to stock the mind with as many puzzles as possible, since these serve the same purpose as is served by experiments in physical science," Russell argued.
Russell was not the only one who was concerned about logic and the foundations of mathematics. At the beginning of the 20th century, David Hilbert (1862-1943) had argued that there had to be a clear-cut procedure for deciding whether a given logical proposition follows from a given set of axioms (an axiom is a statement thta is assumed to be true without proof).
Ramsey set out to demonstrate that such a decision process exists for at least one particular type of mathematical problem. As one of the steps in his argument, he considered relationships among sets of whole numbers, and he proved that if the number of objects in a set is sufficiently large and each pair of objects has one of a number of relations, there is always a subset containing a certain number of objects where each pair has the same relation.
In other words, there are patterns implicit in any sufficiently large set or structure. We can see Ramsey's theorem applied in cases in which the objects are groups of six people (see "Party Games") and whole numbers in increasing and decreasing sequences (see "Pigeonhole Congestion").
Though Ramsey was probably aware that his theorem could be applied to many different areas of mathematics, he focused on its application to mathematical logic. He showed that, given a set of axioms, certain true relationships must exist within the logical system.
Ramsey read his paper containing the result, "On a Problem of Formal Logic," to the London Mathematical Society in 1928, and it was published two years later.
Ramsey died in 1930, at the age of 26, as a result of complications associated with abdominal surgery for a grave illness. Yet he left an astonishing legacy of achievement in several fields. Ironically, the mathematical work for which he is now best known attracted little attention in his day.
Moreover, subsequent developments showed that Ramsey's success in finding a decision procedure for a particular class of mathematical problems was not representative of the general case.
Just a few years after Ramsey's death, Kurt Gödel (1906-1978), followed by Alan Turing (1912-1954) and others, proved that no such decision procedure was possible for any logical system of axioms and propositions sufficiently sophisticated to encompass the kinds of problems that mathematicians work on every day.
Typically, it's possible to make true statements or propose theorems that you can't prove within the given system without adding additional axioms.
Although Ramsey's theorem is accurately attributed to Frank Ramsey, its initial popularization stemmed from its application in geometry and the playful antics of a group of young mathematicians in Hungary in the 1930s.
Previously: Pigeonhole Congestion
Next: Planes of Budapest
Posted by Math Tourist at Sunday, February 21, 2021