Dice represent an intriguing example of the interplay between randomness, chance, and physical law.
The simplest mathematical model of a standard die is based on the assumption that the die is a perfect cube. A cube has six faces, and each face has an equal probability of coming up—one in six (1/6).
A store-bought die, however, isn't really a perfect cube. Such dice, like those used in children's games, generally have recessed spots and distinctly rounded edges. Imperfections introduced during manufacture and use, which alter the die's center of mass (or gravity), also undoubtedly introduce biases. 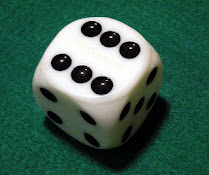 One bias apparent to anyone who has observed the distribution of spots on a die involves the six dimples on one face and the single dimple on the opposite face. Clearly, more material has been drilled out of one face than the other. The mass distribution suggests that 6 should come up slightly more often than the other numbers.
How large is the bias? You could try to find out by experiment, but a lot of extraneous factors can confound the results. You could also create a mathematical model of a dimpled die and compute the odds. That's what Ed Pegg Jr. did in developing models for calculating probabilities involving irregular objects.
Here's where physics comes in.
Imagine putting the die flat on a table. By tipping the die, it's possible to roll the die over to another face. Pegg calculated the minimum amount of energy required for each possible tip. The amount of energy needed to tip the die from 3 to 6 is slightly less than the energy needed to tip it from 3 to 1, for example.
In a toss, the die bounces around randomly, losing energy with each bounce. Eventually, the die doesn't have enough energy to escape from a certain orientation. By calculating centers of gravity for different numbers of drilled pits and using those data to create a Markov matrix for each bounce, Pegg came up with the following results.

Computed results for 10,000 tosses of a die with drilled dimples.
Dice used in gambling casinos are shaped much more precisely than those sold in novelty stores and with many board games. To ensure fairness, the drilled pits are filled with paint of the same weight as the plastic that was drilled out to make the spots (see "A Passion for Tossing Dice").

A casino die.
Pegg has spent a lot of time thinking about dice. For example, fair dice don't have to be in the shape of regular polyhedra, such as cubes, icosahedra, and so on.
Pegg compiled a list (with illustrations) of all possible fair dice—ones in which each face has the same relationship to all other faces and each face has the same relationship with the center of gravity. Along with the regular tetrahedron, for instance, you can also use the four-faced polyhedra known as the isosceles tetrahedron and the scalene tetrahedron. 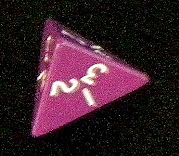 A four-sided die in the shape of a regular tetrahedron.
Pegg listed 30 different shapes for fair dice. "I'd love to see someone make the exotic dice in the list," he remarked.
The fact that dice are subject to physical law also comes up in another context. Pegg observed that, in wargaming and other chancy pursuits, "gamers have an uncanny ability to influence dice." How players take advantage of physical effects to manipulate dice might make for an interesting study, he added,
Originally posted October 26, 1998
Posted by Math Tourist at Saturday, February 06, 2021