All mimsy were the borogoves,
And the mome raths outgrabe.
—Lewis Carroll (1832-1898), "Jabberwocky"
An ape sits hunched over a keyboard. A long hairy finger bangs a key, and the letter a appears on the computer screen. Another random stab produces n, then a space, then a, p, and e.
That an ape would generate this particular sequence of characters is, of course, highly improbable. In the realm of random processes, however, any conceivable sequence of characters is possible, from utter gibberish to the full text of this article.
The seemingly infinite possibilities offered by randomness have long intrigued me. Years ago when I was a high school student, I came across a provocative statement by Arthur Stanley Eddington (1882-1944), a prominent astronomer and physicist. "If an army of monkeys were strumming on typewriters, they might write all the books in the British Museum," he noted in his book The Nature of the Physical World (1928). 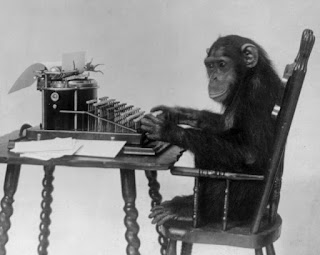