A pursuit curve is the path an object takes when chasing another object. Such a path might result from a fox pursuing a rabbit or a missile seeking a moving target.
More formally, a pursuer must always head directly toward the pursued, and the pursuer's speed must be proportional to or match that of the pursued. Plotting the lines of sight at regular intervals and tracing out the corresponding paths can produce fascinating patterns. 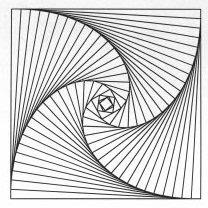 This set of superimposed "snapshots" shows the lines of sight at regular intervals of four "bugs" chasing one another, all moving at the same speed after starting at the corners of a square. Courtesy of John Sharp.
Pursuit curves can arise in a variety of situations and may involve more than one pursuer. Suppose that a person stands at each corner of a square traced out on the ground (see "Square Pursuit"). Each person looks directly at the person to his or her left, then begins to walk toward that person. If all four people move at the same time and at the same constant speed, each person follows a spiral path toward the square's center.
As the people get closer to the original square's center, the new square they define rotates and diminishes in size. In reaching the center, each person travels on a logarithmic spiral with a length equal to the side of the original square.
The following recipe for drawing pursuit curves works with squares and other regular polygons:

The first two steps in drawing pursuit curves based on a square. Courtesy of John Sharp.
In the case of a square, it's possible to mimic the resulting pattern by constructing a series of larger and larger right-angled triangles, starting with a square in the middle. Such an arrangement of triangles and squares can serve as the basis for a colorful, eye-catching quilt. 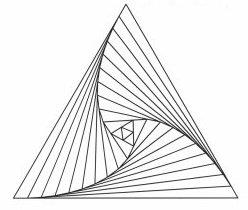 Point P is a Brocard point if angle PAB = angle PBC = angle PCA.
A Brocard point has the property that lines drawn from the vertices to the point are inclined at the same angle to each side of the triangle.
Interestingly, Brocard found the points now named for him in the course of studying the problem of three dogs chasing one another. Instead of focusing on what happens in an equilateral triangle with all three dogs moving at the same speed, he looked at a more general case involving triangles that are not equilateral. However, he still wanted the dogs to meet at the same time and at the same point (the Brocard point). This meant the dogs had to run at different speeds along their spiral paths. Moreover, there were two possible sets of spiral paths, one set for each Brocard point. 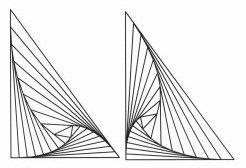 Pursuit curves generated using the two Brocard points of the same triangle. Courtesy of John Sharp.
For paths converging to a Brocard point, the successively smaller triangles remain the same shape from one snapshot to the next. If the speeds were kept constant, the triangles would change shape in successive snapshots.
The rules for drawing pursuit curves and their variants can serve as recipes for creating artistic designs. Pursuit curves offer many artistic possibilities, said English educator and artist John Sharp. They also have links to some very high-level mathematics, he noted.
Sharp became interested in the artistic possibilities of pursuit curves in the late 1960s. He had studied chemistry at Oxford University and worked in industry as an analytical chemist for part of his career. He later wrote computer manuals. In school, Sharp also showed a talent for art. The fact that he was red-green color blind prompted an interest in optics and the psychology of vision.
These different threads came together for Sharp when he discovered the journal Scripta Mathematica, which highlighted cultural aspects of mathematics. Articles in Scripta Mathematica introduced Sharp to mathematical art and to so-called op (for "optical") art, particularly the work of illustrator and sculptor Rutherford Boyd (1882-1951).
He also found inspiration in a 1968 exhibition called "Cybernetic Serendipity: The Computer and the Arts" at the Institute of Contemporary Arts in London, where some early examples of computer-plotted pursuit curves were displayed. At that time, some of these designs even served as standard plotter test patterns. Pursuit curves based on a star-shaped polygon. Courtesy of John Sharp.
In the 1970s, Sharp's paintings reflected his interest in Op art and geometrical art. His purchase of an Apple II personal computer in 1979 provided him with the tool he needed to develop his mathematical art ideas further. Sharp's explorations of pursuit curves and other mathematically inspired forms continued from that time onward. 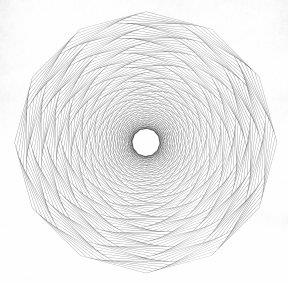 Example of a pattern in which the pursuit direction changes after regular intervals. Courtesy of John Sharp.
In the realm of pursuit curves, Sharp investigated designs that arise when the standard rules are changed a little. For example, you can see what happens when bugs chase each other for several snapshots then reverse direction. 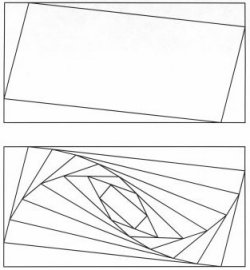 Pursuit curves in a rectangle.
Alternatively, you can start with bugs at the corners of a rectangle instead of a square (or, more generally, an irregular instead of a regular polygon). In the latter case, the nested polygons typically change shape, and the bugs fail to meet simultaneously at some central spot. 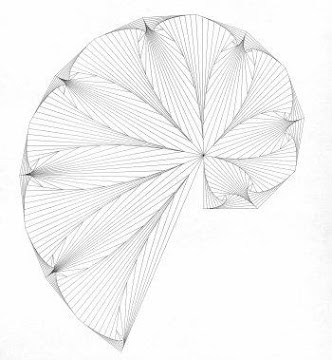 This design shows how changing the shape of a triangle alters the pursuit curve to produce a set of spirals within spirals. Courtesy of John Sharp.
"The introduction of slight variations has opened a floodgate of new possibilities, with the addition of new illusions," Sharp remarked. "Where overlaps occur…, the interplay of the lines gives rise to moiré effects which enhance the design by giving the brain more to explore."
"There are many more exciting possibilities if the pursuit takes place in three dimensions; for example, if the [bugs] become flies and start at the corners of polyhedra," Sharp added.
Computer programmer Bob Brill (see "Scrambled Grids") was another artist who played with pursuit curves for a long time. 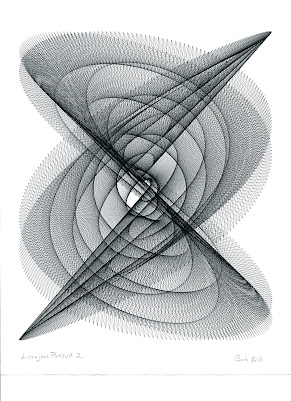 Lissajous Pursuit 2 by Bob Brill.
In the Brill design called Lissajous Pursuit 2, a single hound chases a lone hare. The hare is constrained to hop along the path of a Lissajous figure. Starting at the figure's center, the hound draws a bead on the hare and advances a certain distance along the straight line between the hound and the hare. The hare then hops to its next position, and the hound advances further along the new straight-line path to the hare.
"The algorithm ends when the hound catches the hare," Brill noted. "Two parameters determine when this happens and ultimately what the image looks like: the distance advanced by each creature at each iteration of the process."
The final image is made entirely of the straight lines drawn between hound and hare. "The wildly meandering curve, which is the path of the hound, is an emergent property of the algorithm, rising into visibility because the drawn straight lines are all tangent to this curve," Brill noted. 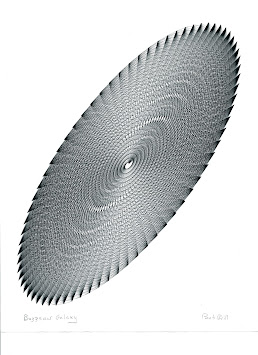 Buzzsaw Galaxy by Bob Brill.
In Buzzsaw Galaxy, the hare's path is a spiral. Brill also created images in which the racing protagonists periodically reverse direction, vary their speeds or travel at different rates, and move under other constraints. "There are so many ways to pursue pursuits!" Brill concluded. 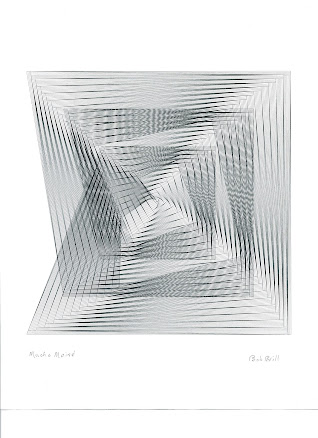 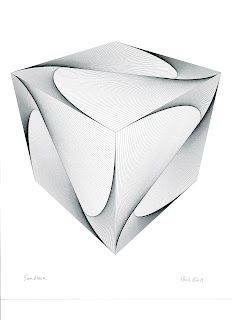 Sandbox by Bob Brill shows pursuit curves in three dimensions.
In the 1920s, Yale art historian Jay Hambidge (1867-1924) argued that design and great art can be created by the application of easily followed mathematical recipes. The art of pursuit curves is one manifestation of such mathematically inspired endeavors.
"There are worlds of order and beauty lying dormant in our various mathematical systems that these simple algorithmic processes are able to make visible," Brill contended. "Mathematics, more than any other human activity, seems to offer connections to the underlying order of the world. This is a great inspiration for an artist and a great challenge."
Originally posted July 16, 2001
Posted by Math Tourist at Wednesday, December 02, 2020