Drawing and constructing polyhedra is a pastime that goes back to the Renaissance and perhaps even earlier times. Leonardo da Vinci (1452–1519), for one, created illustrations of various polyhedra for a 1509 book on the divine proportion by Luca Pacioli (1445–1517).

These immensely varied, crystal-like shapes, with regular features and flat faces (plane polygons), come in all sorts of configurations. Many people know of the five regular polyhedra (Platonic solids): the tetrahedron, cube, octahedron, dodecahedron, and icosahedron. But the realm of polyhedra encompasses all sorts of additional forms: spiky stellated polyhedra, intricate, interlocked shapes, buckyballs and their cousins, and many more.

Fr. Magnus J. Wenninger (1919-2017), a mathematician and philosopher at Saint John's Abbey in Collegeville, Minn., spent much of his life (since 1961) painstakingly and meticulously constructing polyhedra. His colorful, precise models, fashioned from paper and typically ranging from 30 to 40 centimeters in diameter, reflected the broad range of shapes that symmetrical polyhedra can take on. 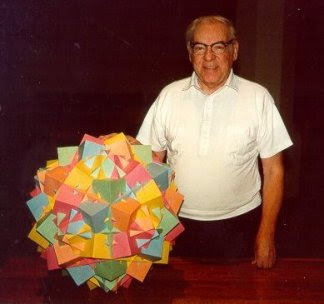 Creating such models was no simple task. I had a chance to observe Father Magnus quietly at work several times at various conferences on mathematics and art. His patience, care, and skill were clearly evident. And the results were awesome. 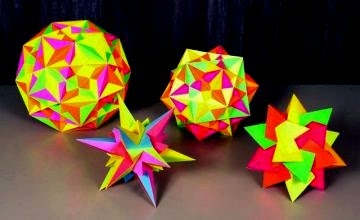 Over the years, Father Magnus wrote numerous articles and several books about how to construct accurate models of various types of polyhedra. Later, he worked with other polyhedron experts to develop design software for creating polyhedral forms. 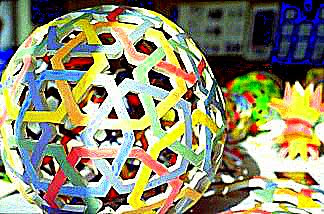 Models on display at a math and art conference. Photo by I. Peterson
If you're interested in templates and patterns for such forms, software such as Stella, developed by Robert Webb, provides a good starting point.