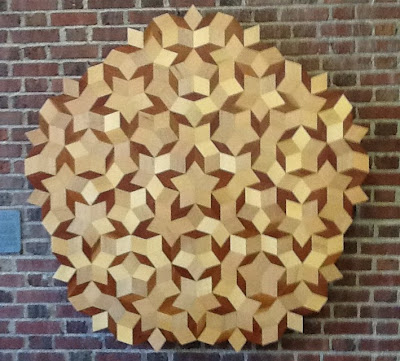 An array of wooden tiles assembled into an intriguing pattern flecked with stars forms a striking contrast to the regular arrangement of bricks making up the wall on which it hangs on the third floor of Avery Hall, home of the mathematics department at the University of Nebraska-Lincoln.

Constructed by Nebraska mathematician Earl S. Kramer from diamond-shaped cherry and maple tiles and installed in March 2005, the wall piece represents a patch of one of the infinite number of ways in which to arrange fat and skinny diamonds into an aperiodic pattern characteristic of a Penrose tiling. 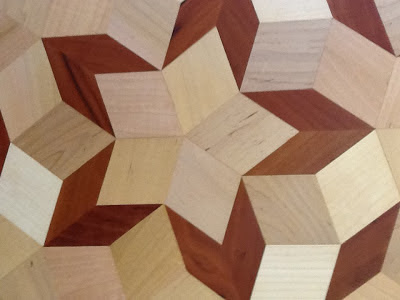 The two types of tiles for assembling such a Penrose tiling are rhombs (each rhomb has four sides of equal length) with acute angles of 36 and 72 degrees. Matching rules specify the ways in which these rhombs must be assembled edge to edge to create an aperiodic tiling (one in which the tiling cannot be lifted and placed back onto itself with all points displaced but still looking the same).

The particular tiling pattern depicted in the wall piece is one of two Penrose rhomb arrangements that have the dihedral automorphism group d5, featuring rotations of order five and reflections across a line, readily apparent in the design.

For another artistic representation of a Penrose tiling, see "Tessellation Tango."

Photos by I. Peterson
Posted by Math Tourist at Thursday, November 22, 2012