No visit to Macalester College can be complete without a quick spin on a square-wheeled trike. It's a weird contraption, but you can ride it quite smoothly, without the sequence of jarring bumps that you might expect. The secret is in the shape of the road over which the square wheels roll. 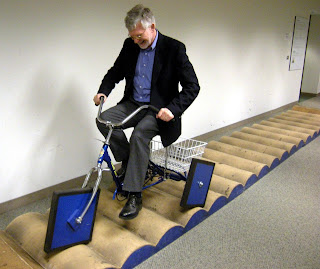 The author aboard the Macalester square-wheeled tricycle. Photo by P. Zorn.

A square wheel can roll smoothly, keeping its axle moving in a straight line and at a constant velocity, if it travels over evenly spaced bumps of just the right shape. This special shape is called an inverted catenary.

A square rolling across a sequence of linked inverted catenaries. Wikipedia.

A catenary is the curve describing a rope or chain hanging loosely between two supports. At first glance, it looks like a parabola. In fact, it corresponds to the graph of a function called the hyperbolic cosine. Turning the curve upside down gives you an inverted catenary.

The Exploratorium in San Francisco exhibits a model of such a roadbed and a pair of square wheels joined by an axle to travel over it. 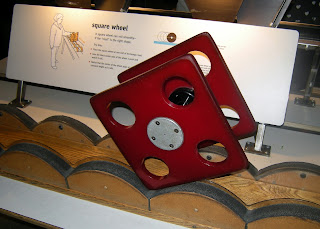 Square wheel exhibit at the Exploratorium in San Francisco.

When Macalester mathematician Stan Wagon saw the Exploratorium model, he was intrigued. The exhibit inspired him to investigate the relationship between the shapes of wheels and the roads over which they roll smoothly. These studies also led Wagon to build a full-size bicycle with square wheels. "As soon as I learned it could be done, I had to do it," Wagon says.

The resulting bicycle (actually a trike) went on display at the Macalester science center, where it could be seen and ridden by the public. In 2004, the science center obtained a new, improved square-wheeled trike. "The old one was falling apart," Wagon says. "The new one's ride is much, much smoother." 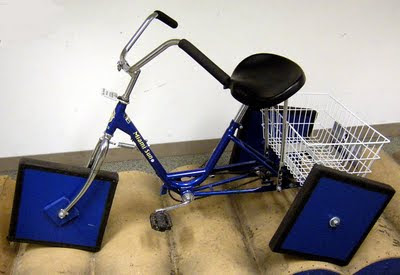 The improved Macalester square-wheeled trike. Photo by I. Peterson.

Ken Moffett briefly describes in a YouTube video how he reengineered Wagon's trike to improve its performance.

Steering remains difficult, however. If you turn the square wheels too much, they get out of sync with the inverted catenaries. Nonetheless, people ride the trike. It has an odometer, which logs about 15 miles per year, an average of eight rides per day. 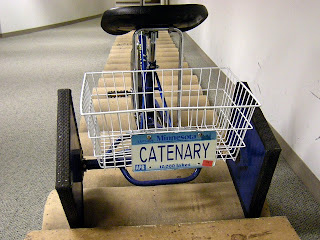 A view of the rear of Wagon's square-wheeled trike. Photo by I. Peterson.


In 2007, students in a mathematical modeling course at St. Norbert College in Wisconsin successfully built a square-wheeled bicycle. This bicycle was a popular attraction in 2008 at MAA MathFest in Madison, Wisconsin. 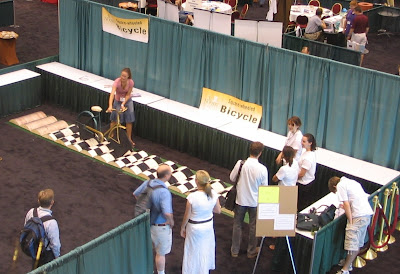 The St. Norbert square-wheeled bicycle in the exhibit hall at MAA MathFest in Madison, Wisconsin. Photo by R. Miller.

It turns out that for just about every shape of wheel there's an appropriate road to produce a smooth ride, and vice versa. Wagon and Leon Hall described many of the possibilities in the article "Roads and Wheels," published in the December 1992 Mathematics Magazine.

Just as a square rides smoothly across a roadbed of linked inverted catenaries, other regular polygons, including pentagons and hexagons, also ride smoothly over curves made up of appropriately selected pieces of inverted catenaries. As the number of a polygon's sides increases, these catenary segments get shorter and flatter. Ultimately, for an infinite number of sides (in effect, a circle), the curve becomes a straight, horizontal line.

As an equilateral triangle rolls over one catenary, it ends up bumping into the next catenary (above). However, you can find roads for wheels shaped like ellipses, cardioids, rosettes, teardrops, and many other geometric forms.

A cardioid rolls on an inverted cycloid.

You can also start with a road profile and find the shape that rolls smoothly across it. A sawtooth road, for instance, requires a wheel pasted together from pieces of an equiangular spiral. 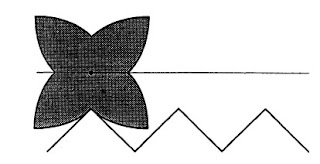 An equiangular spiral on a sawtooth road.

There's certainly more than one way to ride a bike!