A prolific writer on a wide variety of topics, Martin Gardner died earlier this year. On Oct. 21, 2010, on what would have been his 96th birthday, groups all over the world will gather to celebrate Martin's work and continue his pursuit of a playful approach to mathematics, magic, science, art, literature, and much more.
I was reminded again of Martin's generosity and of his delight in surprises when I recently came across a letter  that he had written to me about 10 years ago, when I was pursuing some investigations into Möbius strips as the basis of artworks.
In replying to my query, Martin remarked that he had, by coincidence, just completed an article about Möbius strips for a children's science magazine.  He noted that the article contained nothing that hadn't been in his Scientific American column on the subject in December 1968. "Except for the following," he added, and he had drawn a diagram (below) to illustrate the construction.

Martin concluded with the following instructions: "Trisect the twisted band, then bisect the untwisted one, and open up for a big surprise!"
Of course, he didn't reveal what the surprise was, so I had to try it for myself. 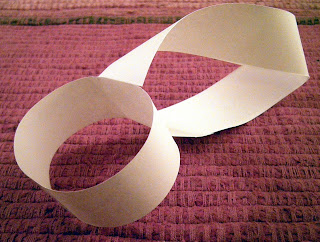 Initial configuration, with one twisted band and one untwisted band, made from a cross-shaped sheet of paper. 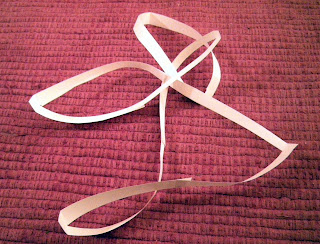 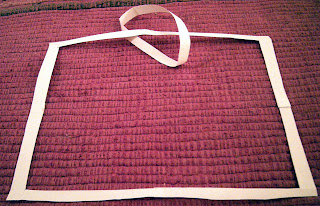 Final configuration, revealing a small Möbius strip interlocked with a rectangular loop.
As Martin had suggested, the result was a delightful surprise.
Photos by I. Peterson
Posted by Math Tourist at Wednesday, October 20, 2010

Indeed, it's a surprise to me when I first tried that two years ago after reading about it in 'A Day's Adventure in Math Wonderland" by Jin Akiyama and Mari-Jo Ruiz, published by World Scientific.

I wonder who discovered it first! After that aha! moment, I started wondering whether we'd have some other possible shapes attached to one another, say, a triangle linked to a rectangle!

The ghost of Dr. Möbius hasn't departed from us, never ceasing to surprise us one more time.

Doesn't this just ruin it for everyone else?

Yes, it "ruins" the fun for those who have yet to try it and be surprised.

No, it challenges us to look for other surprising links! More Möbius surprises are on the way!