From one angle, the sculpture looks like a giant, swooping loop. From another angle, it outlines a pair of wings boldly sketched across the sky. 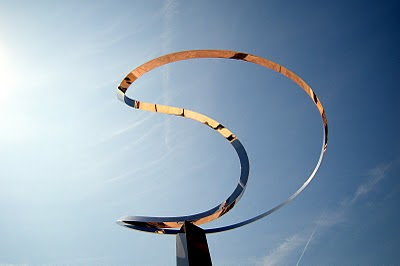 Eight feet tall and sixteen feet wide, this stainless-steel sculpture slowly rotates atop a black granite pillar in front of the National Museum of American History in Washington, D.C. As it completes each eight-minute revolution, the glistening loop presents one strikingly different view after another. 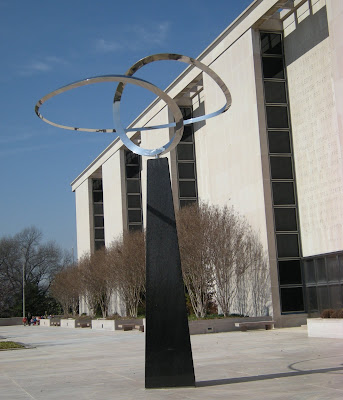 Designed in 1965 by artist José de Rivera (1904-1985), who titled the piece Infinity, the looped sculpture is based on a mathematical figure known as the Möbius strip. A Möbius strip has just one side and one continuous edge. You can make a model of a Möbius strip by joining the two ends of a strip of paper after giving one end a 180-degree twist. 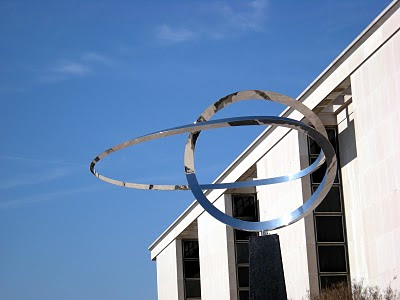 De Rivera's sculpture is a three-dimensional analog of the usual twisted, rectangular strip. The loop's cross section is an equilateral triangle, and this triangle rotates through 120 degrees before the ends meet to form a complete loop. Instead of three surfaces, the final result has just one continuous surface that runs three times around the loop.

Rotating the triangle through 240 degrees also creates a structure with one surface. Rotating it through 360 degrees produces a twisted structure that has three sides, just as it would have if the loop had a triangular cross section with no rotation. 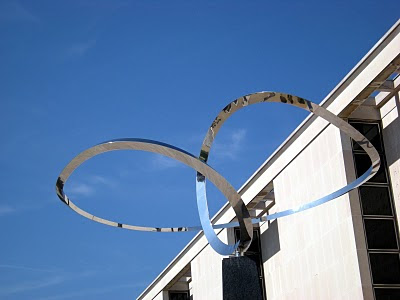 De Rivera's sculpture was completed and unveiled in March 1967, and its debut was noted in Time magazine. "As the great form revolved majestically for the first time last week," the magazine reported, "the early spring sun glinted off its evolving planes, creating an impression of perpetual motion, a release of boundless and elemental energy."

Photos by I. Peterson
Posted by Math Tourist at Thursday, May 20, 2010

have to see it, then

Marvelous post! Living in D.C. I miss more than tourists see most of the time. Definitely will get down to see this. Many thanks for the heads-up!

I first saw this sculptor in 1968 after moving from the West Coat so N. Virginia. I was so profoundly affected by it that it has remained the one piece of modern art that I think of most often and that is frequently. Paintings I have done have been influenced by "Infinity". I have not been back to DC in decades, having left in 1972.