Waves of a Sea Battle

In June 1943, a British submarine, the United, attacked an Italian supply ship in Mediterranean waters. This encounter was recorded in a dramatic aerial photo that reveals not only details of the ensuing battle but also a fascinating array of wave patterns. 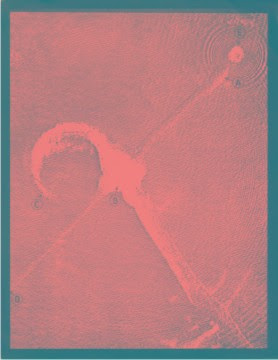 In the photo, the United is at point A. Some of its torpedoes missed, passing the Italian ship. Their wakes are visible, leaving the photo's frame at D. Some torpedoes, however, struck the freighter (B). The ship apparently lost control of its rudder and began steaming erratically before finally sinking at C. In the meantime, an Italian airplane attempted to sink the submarine, dropping a bomb and setting off an explosion at E.

"This photograph is fascinating for scientific as well as historical reasons," Katherine Socha wrote in the March 2007 American Mathematical Monthly. "Its most striking features are the patterns of circular wavefronts visible at the edges of the frame and around point E. The motion of such water waves has been the subject of scientific and mathematical study for years."

Socha noted that the battle photo reveals a distinctive circular wave pattern surrounding the point of impact at E: The separation between wavefronts increases with distance from the explosion. This observation suggests that the outer waves, with longer wavelengths, traveled away from the impact point faster than did the inner waves, with shorter wavelengths. The dependence of wave speed on wavelength is known as dispersion.

In contrast, ripples created by raindrops falling on the surface of a shallow pool show the opposite effect. In this case, longer wavelengths travel more slowly than do shorter wavelengths, so the pattern is reversed.

"It is fascinating that the same physical impetus (an object striking the water surface) can generate qualitatively opposite behavior," Socha said.

In the gravity wave case, the wave speed, cg is given approximately by the following formula, where g is the gravitational constant and lambda (ƛ) is the wavelength.

"Even fairly crude models may capture essential features of a physical situation, at least qualitatively," Socha said. "It is also surprising that, despite the many simplifying approximations, the model describes this qualitative difference in enough detail to be measured convincingly."

In the battle scene, under the assumption that the freighter at point C is about 100 meters long, you can establish a length scale for the photo and estimate the wavelength of the leading (longest) wave and the distance from the impact point to the leading edge of the wavefront generated by the explosion. This distance measurement, together with the approximate wave speed, allows you to determine the lag in time between the explosion and when the photo was taken. 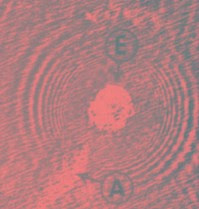 Socha first encountered this remarkable photo when she was taking a graduate course in fluid dynamics given by Thomas M. Dillon. The photo and a question about the lag between time of impact and time of photograph were a final exam puzzle.

Dillon had obtained a copy of the photo from oceanographer A.D. Kirwan. Kirwan noted that the photo has a long history of use in oceanography circles, though exactly who took it and under what circumstances isn't known.