Housed in historic buildings in Washington, D.C., the headquarters of the Mathematical Association of America features an unusual floor tiling in its entry foyer. The tiles are identical pentagons, which fit together to cover the surface. 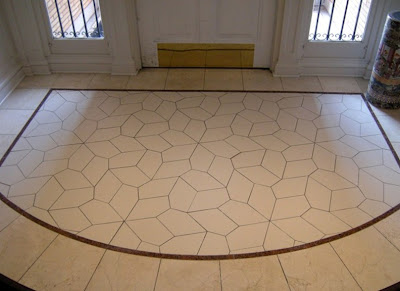 This particular tiling of congruent pentagons had been discovered by Marjorie Rice in 1995, and mathematician Doris Schattschneider adapted the tiling for use in the building's foyer.
Tiles in the shape of regular pentagons, with all five sides and interior angles equal, inevitably leave gaps when used to cover a surface. In contrast, regular hexagons do cover the plane, as seen in the floor tiles used in Washington's Metrorail stations.
But by easing angle and length constraints, you can find types of convex pentagons that fit together neatly to cover a surface. For example, you can readily imagine slicing a regular hexagon in half to create two pentagons, then using copies of these halves to construct a pentagonal tiling. Indeed, any pentagon having a pair of parallel sides will work.

In the early part of the 20th century, Karl Reinhardt defined five classes of convex pentagons that tile the plane, characterized by particular symmetries and angle and side relationships. Reinhardt's list was thought to be complete until 1968, when Richard Kershner found three more types of plane-tiling pentagons.
Martin Gardner discussed the problem in a July 1975 Mathematical Games column, "On Tessellating the Plane with Convex Polygon Tiles." Gardner’s account led to the discovery by Richard James III of an additional pentagonal tiling.
Majorie Rice, a homemaker in San Diego, regularly read her son's copies of Scientific American and took particular note of Gardner's original article and its December follow-up describing James's discovery. Inspired by the articles, Rice began her own search for additional pentagonal tilings. She developed a unique notation and procedure for systematically investigating the possibilities and eventually discovered four additional types and more than 60 distinct tessellations by pentagons.
Rice was also interested in art and used her novel pentagonal tilings as the basis of beautiful geometric designs and Escher-like patterns.
Rice's efforts raised the total to 13 distinct classes of convex pentagons that can be used to tile the plane. Rolf Stein discovered a fourteenth in 1985. However, no one has yet proved that the list is complete.
Rice continued exploring tessellations and subsequently came up with the pentagonal variant that became the basic unit of the unique floor pattern displayed in the lobby at MAA headquarters. 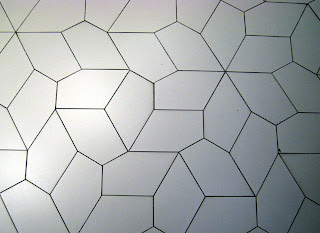 Marjorie Rice did her original work on pentagonal tilings in the 1970s, but she continued her research. The tiling at MAA headquarters is based on her discoveries in the 1990s.

I've made an image that helps if you're interested in the broader pattern of this tessellation https://lh3.googleusercontent.com/-HLXyscwjGQg/Ud7aHA4dv1I/AAAAAAAAASM/QPV1W4c8hI8/w400-h291-no/pentagons.png

It seems to me, that there's a 3 dimensionality that might applied to space.

And now there's one more: http://www.huffingtonpost.com/entry/historic-tile-discovery-gives-math-world-a-big-jolt_55d3e39ce4b07addcb4495ba?kvcommref=mostpopular

Do you know what type of tiling this is? and any of the lengths or angles?

This is unique and interesting, the more I look at it the less I understand the pattern. Brilliant