It happened on a typically foggy morning soon after I had arrived at the Mathematical Sciences Research Institute (MSRI) in Berkeley, Calif. Glancing out my office window at the waves of mist swirling around the building, I caught a glimpse of a herd of goats. Confined within a temporary fence, the goats were busily chomping on thick clumps of yellow grass and the green leaves of scraggly bushes scattered across the steep hillside down below.

Part of an effort to reduce the risk of fire sweeping through the Berkeley hills, the goats served as natural grass eliminators, able to go where no lawn mower dare venture. 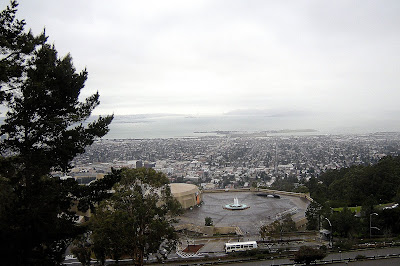 The view, on a misty day, from the Mathematical Sciences Research Institute in Berkeley, Calif., down to the Lawrence Hall of Science and beyond to San Francisco Bay.

There's even more to see in the brilliant sunshine of a Berkeley summer afternoon. About 230 steps down the hill from MSRI via several narrow parking lots and sets of stairs is the Lawrence Hall of Science, which itself overlooks the domed accelerator facility and other buildings of the Lawrence Berkeley National Laboratory. From there, many more steps take you down to the main campus of the University of California, Berkeley. San Francisco Bay and the Golden Gate Bridge glint in the distance. 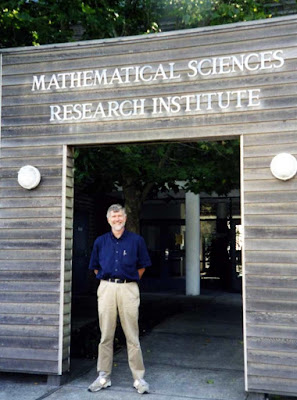 Ivars Peterson at the entrance to the Mathematical Sciences Research Institute, August 1999.

Indeed, the institute's programs, conferences, and workshops attract mathematicians from all over the world. Some stay just for a few days; others spend a semester or more at the center, often focusing on some hot topic in mathematical research. In the fall of 1999, after my stay at MSRI, attention shifted to the specialized fields of noncommutative algebra and Galois groups.

"For the semester that we're running a program, we like to think ... that we are usually the strongest center in the world in the field," noted David Eisenbud, then MSRI director, as quoted in a 1999 article in SIAM  News.

The idea is to gather a diverse group of mathematicians representing, when possible, different approaches to and interests in a given topic. In some cases, physicists and other scientists join in the discussions and presentations. The resulting interactions turn such programs into exciting learning experiences for everyone involved, as they did in the spring 1999 session on random matrices, which had links to both number theory and quantum mechanics (see "The Mark of Zeta").

In many ways, MSRI programs represent an effort to overcome the fragmentation of mathematical research into private conversations and highly specialized endeavors accessible only to a handful of experts.

It's not unusual to hear a variety of accents and languages when MSRI members and visitors compare notes and trade tips. Each office has a blackboard (and plenty of chalk). Additional blackboards are strategically located in the atrium, along corridors, and even outdoors in the patio, ever ready to bear the scribblings that inevitably accompany an impromptu seminar. 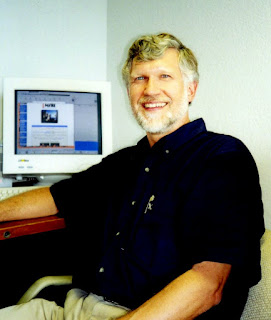 Even in an age of instant communication via email, telephone, fax, and the Internet, nothing beats face-to-face encounters—at a blackboard or over a table—to work things out. Afternoon teatime, in particular, draws people out of their offices and away from their solitary pursuits.

Remarkably often during my three-month 1999 sojourn at MSRI, I witnessed a mathematician standing at the ubiquitous blackboard, coffee cup or cookie in one hand and chalk in the other, answering a question or patiently explaining some new mathematical wrinkle to interested bystanders. A book could be written about mathematical advances that came about because of chance encounters at afternoon tea (see "The Return of Zeta").

The skylights, floor-to-ceiling windows, white walls, gray carpeting, and potted bamboo plants create a subdued environment pleasantly conducive to mathematical thought and interchange. "It's a nice place to work," Eisenbud insisted, gently understating the pleasure he took at being at the institute.

A noncirculating library with an extensive array of journals, a quirky collection of old and new books, and an assortment of mathematical games and puzzles provides handy reference material and entices the mind. Members can also glance at the morning New York Times or the latest issues of Nature, Science, Science News, The Chronicle of Higher Education, Scientific American, American Scientist, Communications of the ACM, and The Nation.

Some MSRI efforts reflect the enormous need for programs that bridge the gap between mathematics and the other sciences and foster interdisciplinary approaches. In 1999-2000, for example, MSRI featured workshops devoted to mathematics and imaging, the future of mathematical communication, quantum computation, and computational biology and genome analysis.

The summer of 1999 saw the introduction of an annual two-week program for graduate students interested specifically in the application of mathematics. The subject of that first course was nonlinear dynamics of low-dimensional continua, and students had a chance to try out their understanding of both mathematical model and physical theory in simulation projects ranging from microfluidic mixing to turbulent convection and pattern formation in liquids (see "Row Your Boat"). The summer 2000 course focused on mathematical issues in molecular biology.

Even during a lengthy hike (led by intrepid outdoorsman David Eisenbud) into nearby Tilden Regional Park for a lunchtime picnic and barbecue, the students taking the summer course continued to puzzle over their projects, in between comparing experiences at different universities, exchanging gossip, telling travel tales, and pondering job prospects. Those conversations, too, represent an affirmation of the collaborative nature of contemporary mathematical research.

Mathematical outreach can extend to all sorts of audiences. In July 1999, a class of high school math students visited MSRI to learn a little about what mathematicians do and what makes them tick. From Hugo Rossi, just ending his term as MSRI deputy director, they obtained a glimpse of both the immense appeal and inevitable frustrations of mathematical research at the frontiers of thought. They even got a brief lesson in the curious arithmetic of the ancient Egyptians.

The students also saw an impressively dramatic demonstration of juggling with balls and clubs, performed by Joe Buhler, about to start his stint as MSRI deputy director. They got a feel for the combinatorics of juggling—how numbers can be used to represent different juggling patterns (see "Juggling by Design"). To their delight, the students discovered they could, in addition, tap into some of the mathematical talent on display to glean hints on how to handle homework problems involving slope (rise over run) and linear equations.

MSRI offers more for the mind than mathematics. Special art exhibitions add provocative color and form to the white walls and the space within the high-ceilinged atrium. The summer 1999 display featured the collage-style work of Berkeley artist Mari Marks Fleming—visually rhythmic speculations on "time, nature, and the space between."

A more permanent fixture is an artwork by mathematician and sculptor Helaman Ferguson. Called The Eightfold Way, the sculpture sits in the middle of the patio, framed by a backdrop of hills, pines, and eucalyptus trees. 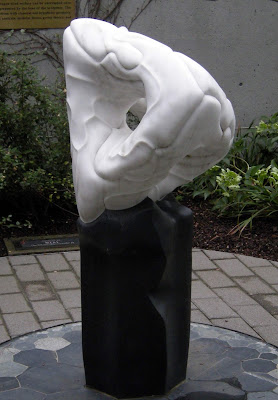 The Eightfold Way by Helaman Ferguson.

Carved from a block of Vermont white marble, the roughly tetrahedral form rests on a black serpentine column. Covered with mysteriously indented curves and sinuous ridges, the sculpture invites comment and touch.

My final image is of a late-afternoon concert in the atrium—sunlight streaming through the skylights to illuminate the members of the Peregrine Trio and of the sublime music of Mozart, Beethoven, and Haydn sailing throughout the building. It seemed a fitting finale to a stimulating summer spent immersed in a world devoted to the pursuit of mathematics.