Vonda N. McIntyre, who died on April 1, 2019, was a noted author of science fiction. She also had a fascinating hobby: stringing beads into intricate structures, some with a mathematical basis. I wrote about her hobby in 2004.

Anatomy of a Bead Creature

Vonda N. McIntyre is best known as a writer of science fiction. Her 1997 book, The Moon and the Sun, won the Nebula Award for best novel. She also has an intriguing hobby: creating intricately crinkled creatures out of tiny beads.

"I always have to have a fiddly hobby," McIntyre says. She had done needlepoint and crocheting before being attracted to beadwork. But making patterns on essentially a flat surface was a little too mundane for her. Experimenting with various ways of stringing beads, she developed methods for producing objects with wavy or frilled edges. 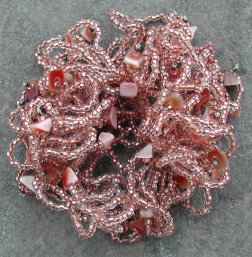 Her anemones consist of concentric circles of circles of beads. Starting from the middle, each circles has twice as many beads as the previous circle. After just three or four circles, the nascent bead critter is already quite frilly. Her sea slugs (nudibranchs) start with a line of beads.

People can't resist picking up McIntyre's creations and playing with them. "They're irresistible," McIntyre says. "People enjoy the feel of the beads in their hands." To some, the bead creatures feel alive.

Inspired by an article on artistic representations of the hyperbolic plane, McIntyre tried a slightly different approach. Her basic unit consisted of five diamonds (rhombuses) meeting to form a star. Each pair of exposed edges then became the starting point of a new star unit. 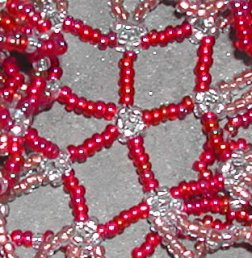 The resulting creature can't lie flat. It automatically wrinkles, yet any part of the crinkled bundle can be flattened out to reveal the same five-diamond unit. It's McIntyre's own model of the hyperbolic plane, where the angles of a triangle always add up to fewer than 180 degrees. 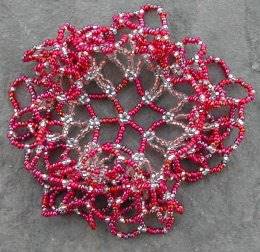 From a distance, McIntyre's earlier anemones and her new creatures look similar, yet they have quite different structures. Together, her bead creatures offer a unique, hands-on experience with non-Euclidean geometry.