IIII versus IV on Clocks

Expressed as Roman numerals, the first twelve numbers are usually given as I, II, III, IV, V, VI, VII, VIII, IX, X, XI, XII. However, on many clock faces, when the numbers on the dial are in Roman numerals, IIII replaces IV. 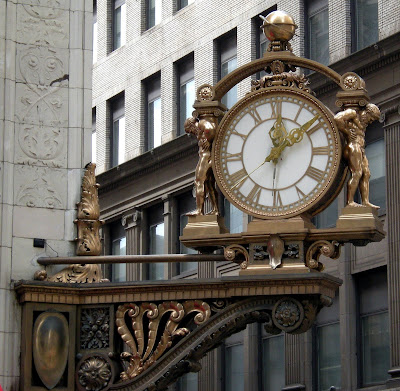 In Pittsburgh, for example, the ornate Kaufmann's clock (above) at the corner of Smithfield Street and Fifth Avenue, shows IIII instead of IV.
There are many stories about why IIII appears so often as a replacement for IV on clocks but no definitive explanation. The tradition apparently has a long history and may even go back to sundials. 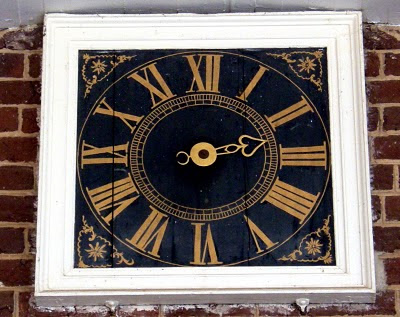 A large entrance clock created for Thomas Jefferson at his home Monticello features IIII instead of IV.
I tend to like the explanations that appeal to symmetry. Using IIII instead of IV means that the first four numbers—I, II, III, IIII—require only I; the next four—V, VI, VII, VIII—only I and V; and the final four—IX, X, XI, XII—only I and X. 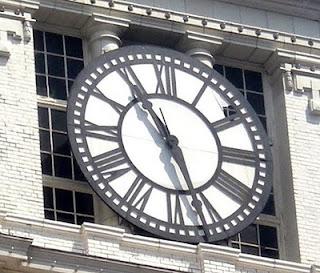 A clock in Portland, Oregon.
Some also argue that, on a clock face, IIII is a better balance than IV for the VIII that appears across from it.
You can also count up how many of each character you need to create all the numbers. In the IIII case, the totals are 20 I's, 4 V's, and 4 X's (all even numbers), versus 17 I's, 5 V's, and 4 X's. 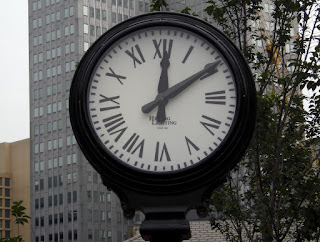 Some clocks do use IV instead of IIII, like the clock (above) in Pittsburgh's Market Square. The most famous example may be Big Ben in London. 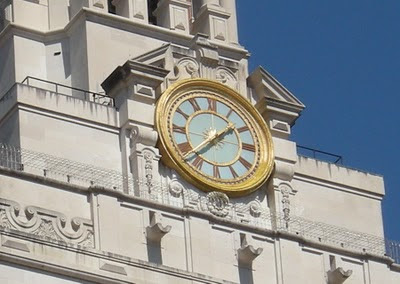 The clock atop the tower at the University of Texas in Austin features IV instead of IIII.
So, what happens with Roman numerals on a 24-hour clock? What about sundials?
Photos by I. Peterson
Posted by Math Tourist at Wednesday, August 04, 2010

'IIII V VI' is by much easier to read than 'IV V VI'... the numbers are upside down!

And yes I just posted on a 6 year dead thread.

And yet, Anonymous, 'IX, X, XI" doesn't seem to raise a comparable concern (not disagreeing with you, just noting the inconsistency in passing).

Railbus I think Anonymous's point is that IV V VI are upside down, IX X XI are not

Peoples ignorance astounds me.
It is about symmetry.
IIII is how the Romans wrote 4.
18th century clock makers used IV for aesthetic reasons.
This is what I was talk in school 40 years ago.
Perhaps they should start teaching knowledge instead of exam passing,
lol.

Adrian, for all those ignorant people shouldn't that be: People's and taught.

I think, IIII WAS used to make readable even in a mirror. coz in a mirror IV would be read as VI

Why so rude? This is an interesting subject. Why not discuss it in a civilised manner? We've all picked up different snippets of knowledge throughout our lives & we've all missed other bits. Being ignorant of one piece of knowledge does not make one an ignorant person. Please play nicely now.

Eleanor, Thank you so much for the reasoned and sensible comment!

Yes the IV is often interchanged with IIII as this offers a more pleasing and balanced look upon the clock face. However, there is a technical reason/explanation for the introduction of the IV to represent 4 o’clock. This is known as Roman Striking invented by Joseph Knibb (1640-1711). With the “Roman Striking” system a large bell or lower tone is sounded to represent “five”, and a small bell or high tone is sounded to represent “one”. For example, four o’clock would be sounded as a high tone followed by a low tone. Eleven o’clock would be sounded by two low followed by a high tone. The reason the IV was substituted for IIII was to conserve the power of the striking train. The striking train is a gear train that transmits power to the hammer mechanism that rings the bell.
Prior to Knibb’s Roman Striking system, striking clocks sounded a number of tones equal to the hour. For example, one strike (tone) for one o’clock, two strikes for two o’clock and so on to twelve strikes for twelve o’clock (or 24 strikes for 24 hour clocks). As you can see this would require 78 or 156 strikes for a complete 12 or 24 hour cycle. Remember, clocks needed to be manually wound –no electric power. Knibb was able to reduce the number of strikes by two-thirds to just 26 or 52 thus conserving the power needed from the striking train by 66%.
For example, VII would be a total of three strikes instead of seven, and XII would be four strikes instead of twelve.

I came here because of the video game named Call of duty: Black Ops IIII. As, I always thought IIII in numeral is wrong and IV is right but this page, it's something else.

Another theory. IV is the Latin abbreviation for Jove, the senior Roman god. The early clock users mostly spoke Latin as a second language (clocks were extremely expensive) and religiously sensitive. They did not want their clocks to read 1,2,3,3,GOD,5.... and have God relegated to 4th place.

I was shopping for roman numbers to put on a homemade clock and ended up here. Yes its an old as hell thread but entertaining and informative. Now does anyone have some 3" copper roman numbers just Xll, lll,Vl and lX for sale?